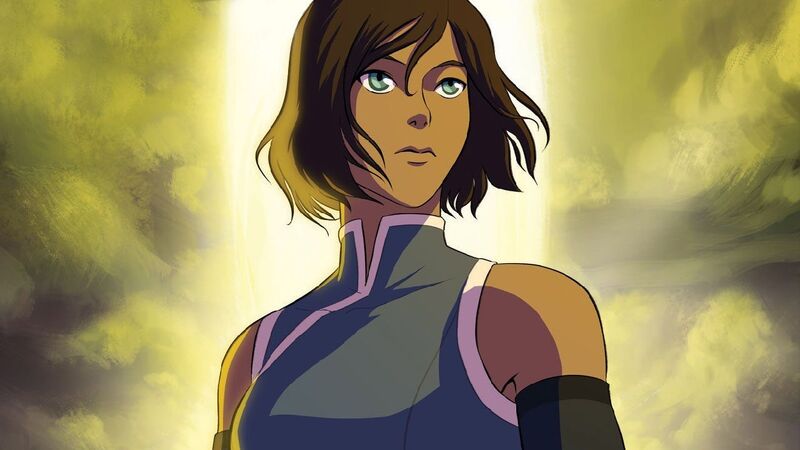 Fandom’s Avatar wiki hits the ripe old age of 15 this month. The community of fans who help to build the resource, which incorporates fan fiction, celebrate all things Avatar: The Last Airbender — including The Legend of Korra. To mark the occasion, Janet Varney who voiced Korra in the sequel series chatted to Hey Fandom! to answer fan questions and look back (and forward) on the show, which ran from 2012 – 2014.

The series’ final scene suggested the beginning of a romantic relationship between Korra and non-bender Asami Sato, a development that back then was unprecedented in a western animation aimed (in part) at children. Six years later, Varney addresses Korra’s sexuality and how it was approached and revealed.

“I wasn’t told about that and about the canon plan of it until maybe halfway through, or even deeper in, because they were working on the show and that was something that was happening as the show was being written,” she said. “As a writer … sometimes the characters just tell you what the story is. That being said, I have been bi[sexual] my entire life, that’s something that I’ve never felt any shame about or been secretive about. And I really felt like it would make a lot of sense for the person I had come to understand Korra to be. I also had my own crush on Asami! So I’m the last person that would be judgmental of that. When I did know I was super, super onboard.”

Varney loved the way the writers didn’t make romance the focus, however.

“One of the things that I loved about it is that it wasn’t a show about who Korra’s relationship was with,” she explained. “We had that experience with Mako when Korra is just fresh to this entire new world of Republic City. And she’s doing pro-bending stuff and all of those things are kind of rushing at her and she’s taking them all in and she’s developing these close relationships with people. It was really important to the writers that it become about the world and about Korra’s experience learning how to be an avatar rather than necessarily making it all about the relationships, the romantic relationships — which I think was great because it really gave the show the room to be tackling some really big issues. But then within that, realizing that there’s this incredible connection between Korra and Asami and watching that come to fruition [was great].”

Six years ago, of course, all of this was groundbreaking. But pop culture moves quickly and if the show was around today tackling the issue, the show would likely have broached things differently.

“I think that’s a really important thing to keep in mind,” Varney said. “This is a whole other very long conversation that I’m sure many of you guys are having with friends and thinking about on your own. But this is all part of a continuum. And as easy as it is for us to get angry that things didn’t move faster than they have — and anger is good, because it propels us forward — it’s very important, and righteous indignation is very important. But we’re all a product of our environment. And so, I think [with] some of these things that we’ve seen that are landmark moments like characters being able to be openly queer and celebrated on television, or any of the fantastic motion that we’re seeing in black lives matter right now, and all kinds of other worthwhile conversations and movements, that we have to push forward. Just because someone else 25 years ago couldn’t make that happen, the way it’s happening today doesn’t mean that it’s not part of this thing. We’re all moving forward together.”

For Varney, Nickelodeon’s choice to show the relationship the way they did was the start of something bigger.

“I appreciate and respect Nickelodeon making the decision that they did to say ‘Let’s be real about this, and let’s let it be canon, and let’s do our part,” she said. “Did they have a big makeout scene? No. And I agree, of course, we would have loved to have had the kiss and all that stuff. But I think they have since continued to champion the relationship there and helped advance LGBT+ stuff in their world as well. But I do think that that would have been different now. If the finale aired today, I think it would be different in a great way.”

From Terrifying Beginnings to Korra’s Next Steps

When Varney was first cast in the series, she was such a fan of the Avatar universe that she found the whole thing extremely intimidating.

“For someone like me coming into that world, I was terrified. I was hoping that people would like it, I was hoping that I would do the character justice. I didn’t really know anything about her, other than [the fact that I’d seen] maybe one image and some dialogue,” she said. “Nickelodeon rightly was carefully secretive about their process and about what the characters would look like, and what they were all about. And so I went in kind of blind. But, boy, knowing the universe and being a fan of it, it was like, ‘Don’t think about that’. Don’t think about that because … the more you respect and esteem something, if you have a chance at being anywhere near it, there’s a sense of like I almost wish I didn’t care about this because then I would just breeze in there like, ‘Hey, how you doing? You should be you’d be lucky to have me,’ instead of ‘Oh gosh.’”

Given that she’s a fan, would she be up for a third Avatar-universe series that visits Korra in the future?

“I would love that,” Varney said. “I would love anything that they decided to do in the animation world. I would love for them to go even further back, for them to do any of the in-between stuff from the time jumps or going into the future. I just have no doubt that the show would be great. And it would be so cool to see what they would introduce next.”

Avatar: The Last Airbender  got a lot of renewed attention recently when it arrived on Netflix, and with a live-action series of Last Airbender also in the works for that streaming service, a fan asked Varney if she’d like to see Korra get a live-action adaptation as well. But given that The Legend of Korra, unlike Airbender, doesn’t yet air on Netflix — the series currently streams on CBS All-Access — Varney wasn’t sure.

“Whether or not Korra heads over [to Netflix]… the animated version, [I don’t know]. I hope so,” she said. “Because, again, I’m such a fan of it that I hope that more people get to see it. And then the live-action version, who knows? I guess it just depends altogether on how the live-action [series] of Avatar is. We’ll see.”

Don’t Do It By Yourself

Finally, what advice would Janet give to Korra, with the benefit of hindsight and a different perspective?

“I had the same frustrations that viewers had for the first season with Korra, [about] this stubborn behavior in the way that she was defensive about herself, which you could classify as maybe being in denial,” said Varney. “Or [as heading to] those places that many of us go to where the truth is maybe really scary. And so we minimize, or we try to think, ‘I can do this by myself. I don’t need help.’ Or, ‘let me just barrel into something without thinking about it because thinking sometimes is scary, so if I just act really quickly maybe it’ll work out.’ And I think I had those feelings of like, ‘Oh, Korra, come on, hold on, whoa, whoa, whoa, whoa — why don’t you talk to Tenzin about this?’ or ‘You have friends, why don’t you ask for help?’

She would tell her, therefore, to lean on her friends.

“That is definitely something that I have certainly learned and felt like I wanted her to catch up on,” she continued. “And of course she does in the series, but it’s hard. She’s a teenage girl and she’s not really an airbender per se in the way that she needs to be, and those are qualities that she obviously really needed to learn and continue to learn. Call on those people who can help, and call on that expertise and [do] not be afraid to admit your vulnerabilities and stuff. I think if she had accepted that stuff and looked at it right in the face sooner, maybe that would have been helpful.”

You can watch the Hey Fandom! episode featuring Janet Varney below!

Catch up with Varney and her conversations with guests about teenage life by listening to her podcast, The JV Club.