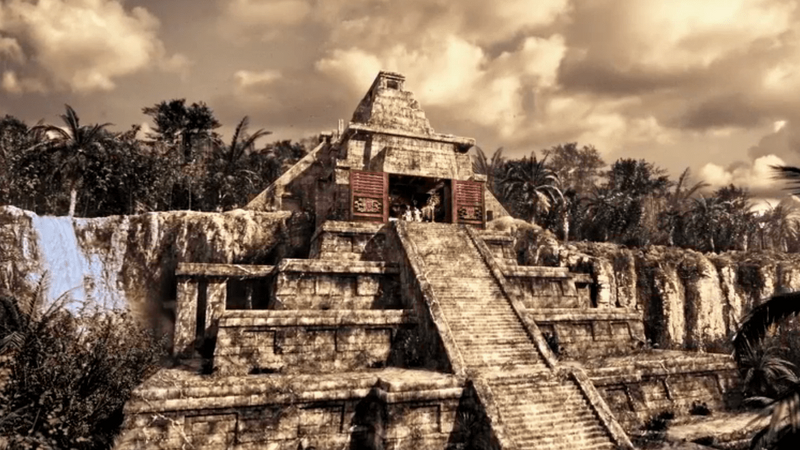 Yes, it’s a movie! The game show was wonderful, and the new movie looks just as great — as an action-adventure TV movie inspired by the original. The story follows three siblings who embark on the action-packed adventure-mystery of a lifetime when they fall into an ancient temple. Inside the temple, each room contains new obstacles and puzzles to complete. If they don’t solve them, they could be sealed inside for eternity.

When you think of Legends of the Hidden Temple, you think of Olmec. And so it’s no surprise — but still awesome — that they’ve brought back the talking stone head who served as co-host of the original show. As the temple guardian, it is Olmec’s responsibility to protect the treasures within, those who dare enter will need his guidance to help make their way out.

Veteran voice actor Dee Bradley Baker returns to reprise one of his earliest roles as the voice of Olmec.

Sadie (Isabela Moner), Noah (Colin Critchley), and Dudley (Jet Jurgensmeyer) are three siblings on a boring jungle tour at Hidden Temple Park. Noah and Dudley ditch their parents to sneak into the temple. But before Sadie can talk her brothers into leaving, a misstep triggers a booby trap, plunging them into the temple.

The castmates look like they had a blast making the movie, and we can’t wait to see their characters contend with all of the temple’s challenges.

Oh, and remember Kirk Fogg, the original show host? He’s back as a fictional version of himself who works at the park as a tour guide. How fun is that?

The original show required contestants to perform “dangerous” feats in order to advance to the next round. Once tasks were completed, they were awarded Pendants of Life. These could be used as a get out of jail free card if they were caught by one of the Temple Guards.

In the movie, the trapped siblings will find themselves on an Indiana Jones-like adventure and must make their way through a series of mysterious ancient obstacles, inspired by the original show, before they can escape. Fortunately, Noah happens to be an expert in the temple’s mythology.

More Callbacks to the Original

Easter eggs and other fun references to the original will be in full effect! As seen in the trailer, we’ll revisit fan-favorite locations like The Steps of Knowledge — they were the official entrance to the temple and essentially acted as the launch pad for the team’s missions.

There will also be special appearances by the green monkey, red jaguar, silver snakes and more — the original mascots for the show’s six teams.

The Legends of the Hidden Temple movie event premieres Saturday, November 26 at 8PM on Nickelodeon. Don’t miss it!