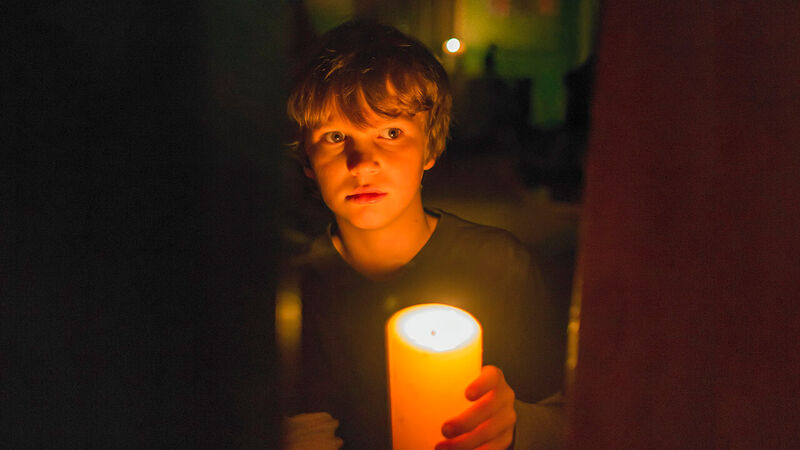 What is ‘Lights Out’?

It all started with a two-minute, 42-second short film. When Swedish filmmaker David F. Sandberg released the first Lights Out back in 2013, he had no idea the web would react with such enthusiasm to the award-winning short. He executed that light switch gag with so much skill that Hollywood couldn’t help but react, too. Producer Lawrence Grey showed the short to James Wan (Saw, Insidious, The Conjuring), and they both met with Sandberg. A whole bunch of business minutiae happened. Now the feature-length adaptation of Lights Out, directed by Sandberg, is out in theaters across the nation. But can a such a simple gag expand to become a great horror movie?

I’m sure it could, but it doesn’t happen in Lights Out. Screenwriter Eric Heisserer (a go-to guy for studio horror) took Sandberg’s smart gag and stretched it across a clunky and uneven story. The film centers on a broken family whose mother, Sophie (Mario Bello), suffers from maybe-kinda-bipolar disorder. The film finds a protagonist in her daughter Rebecca (Teresa Palmer), a pot-smoking metal fan with a hunky dude (Alexander DiPersia) she’s reluctant to call her boyfriend. When a shadowy specter kills the family’s stepfather (Billy Burke), the grief-stricken Sophie goes off her meds. Rebecca’s younger brother (Gabriel Bateman) is kept awake by a malevolent presence that Sophie talks to late at night.

That presence is Diana, an ink-black silhouette with sharp claws and reflective eyes. Confined to the shadows (but also able to control light to some degree) she’s a frightening, elemental concept that becomes markedly less frightening the more we know about her. The film delivers a painful jab-cross of exposition dumps pretty early on, dissolving much of the mystery. What’s worse is that those of us who’ve seen the trailer already know most of this exposition. So for us, the mystery feels even less propulsive. (Sandberg has also expressed disappointment with the film’s marketing.)

And for a movie that’s only 81 minutes long, Lights Out is remarkably low on propulsion. For instance, when Rebecca finally decides to confront her mom about the maybe-kinda-shadow-ghost that’s trying to kill her and her brother, the movie steps on the brakes. The very next scene shows us the characters sitting awkwardly around the dinner table. They trade long, uncomfortable glances before getting to the conversation that so urgently needed to happen. Moments like this the disrupt the flow. They break links in the chain that is supposed to lead us through. But on the way through, the film doesn’t properly explain why and how Diana is terrorizing our characters, and how they might be able to stop her. The film’s internal logic falls prey to supernatural convenience.

All that said, Lights Out still has a few tricks up its sleeve. Sandberg sure as hell knows how to frame and light the film’s abundant scares, which are sure to please the PG-13 crowd. Also pleasantly surprising is the character work, which avoids tired stereotypes. Rebecca, despite the metal band merch and formidable bong in her living room, isn’t some moody goth chick. She aspires to independence and responsibility. She seems to be taking to adulthood pretty well until she leaves her bong out during a visit from Child Protective Services. Her almost-boyfriend Bret initially seems like just another hunky dude in a band but reveals himself to be warm and intelligent. He drives a nice Volvo (how responsible!) and longs for serious commitment.

In addition to the solid character work, the film packs some surprisingly mature themes. Mental illness, the difficulty of parenthood, the fear of abandonment, and abusive relationships echo through the film. Thoughtfully rolling all of that into a PG-13 horror flick is admirable. The film also deserves praise for looking great on a low budget and avoiding expensive CGI to accomplish its effects. Sandberg is great at that stuff — you can see it in the “making of” videos he publishes to Vimeo. But when Lights Out feels stilted at such a short running time and is loaded with exposition that doesn’t even explain half of what’s going on, I find it hard to recommend watching Lights Out for what it manages to do well.