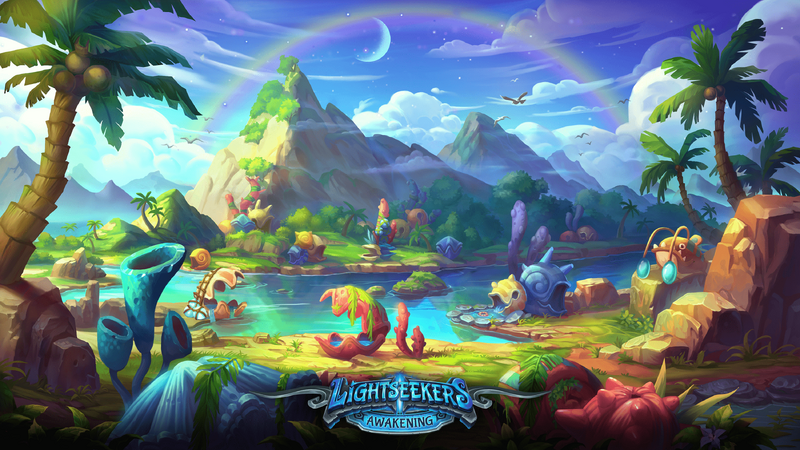 ‘Lightseekers’ – Kickstarter Game of the Month

Each month we bring you the best and most interesting Kickstarter games, from charming indies to inevitable blockbuster hits.

This month’s featured game is a new action-adventure role-playing video game titled Lightseekers. Creator PlayFusion developed the game specifically for the iOS and Android platforms. While the video game portion is essentially the core of the system, it’s not limited to just the app. Lightseekers seamlessly connects smart action figures, physical trading cards, posters, comics, and more. In this way, it aims for even more diverse interactivity than similar games such as Skylanders or Disney Infinity.

Players will be able to purchase and use 7″ action figures to enhance gameplay. The characters ‘come to life’ when connected to Lightseekers.  Unlike the aforementioned games, the figurines for Lightseekers do not require a physical portal. Instead, the characters connect via Bluetooth technology built into an IoT module known as the Fusioncore. This module can store gameplay and character specific information. It is detachable and forward-compatible. Action figures will talk, vibrate and utilize different colored lights to display information. Players on-the-go can detach the Fusioncore and take it with them. The module remembers the last character played and enables the game to access the character without it actually being present.

Meanwhile, the accompanying trading card game can be played independently and includes over 384 cards. There are cards that, when scanned, will add more functionality and accessories to the game. Though the campaign for Lightseekers has already completed, you’ll find information regarding the game’s development is available on Kickstarter as well as the official website. We welcome you to share in our enthusiasm for the game by joining our Lightseekers community at Fandom.

Lost Ember is a game of exploration and discovery. The main character is a wolf who meets an entity — the last of its kind — who has been on a long journey in search of someone who can help him on his quest. Together they seek Machu Kila, a city in which to find answers. The entity possesses the ability to share past memories throughout the world that the player will experience while taking the form of different animals. Some of the animals featured include parrots, fish, moles, mountain goats, and buffalo.

Developer Mooneye Studios announced the game will be available for Xbox One, PC and Playstation 4. The Kickstarter campaign has completed but players can still back the project on the official website.

Slaps and Beans is an official video game based on two famous Italian actors –  Bud Spencer and Trinity Hill. Their more commonly known roles were those of Bambino and Trinity in films such as They Call Me Trinity and My Name Is Nobody. This beat-em-up side-scroller features retro-styled pixel art, iconic slapstick comedy, and unique fighting styles.

Slaps and Beans also includes minigames as well as a story purposely created to pay homage to the films. The idea for Slaps and Beans originated through a game-making contest. Participants were asked to create a small game based on “Spaghetti Westerns,” a term used to describe western styled films that contained a primarily Italian cast or crew.

Slaps and Beans includes both single-player and co-op game modes. Developer Trinity Team has not yet announced a date for release. For more information or to back the project, visit the campaign on Kickstarter.

Lightseekers – An action-adventure video game enhances with the use of trading cards, comics, posters and more.

Lost Ember – A game of exploration and discovery. Follow the tale of a wolf and his companion as they journey to the city of Machu Kila.