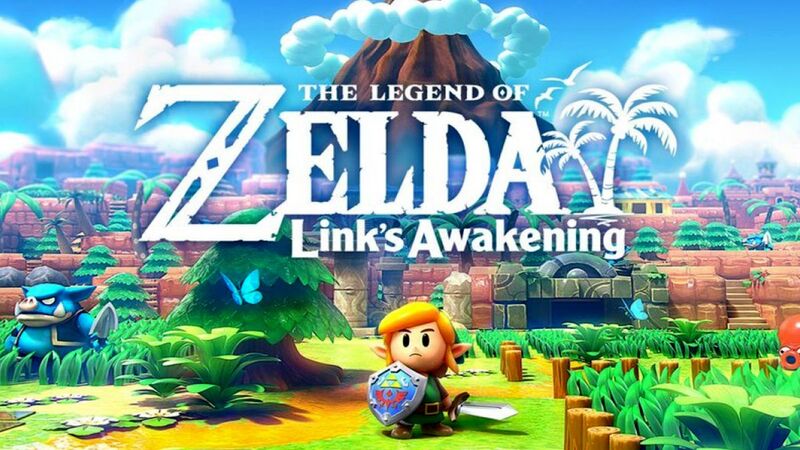 The first time I completed The Legend of Zelda: Link’s Awakening, I cried. I was ten years old, and Link’s Awakening on Nintendo’s boxy but groundbreaking original Game Boy marked a series of firsts for me. It was the first Zelda game I played. The first video game I encountered with a story deeper than ‘run, jump, or shoot your way to the right of the screen’.

The first time I realised that it was possible to care about pixellated characters, even ones brought to life on a crude, green-and-black monochrome screen. And, at the end, the revelation that games could create a powerful emotional resonance that can linger across the decades – right up to the launch of Nintendo’s charming new remake of the classic adventure for the Switch.

Let’s backtrack a little first though. For the uninitiated, The Legend of Zelda: Link’s Awakening was the fourth Zelda game to be developed, and the first for any of Nintendo’s handheld systems. Originally released in 1993, it proved to be something of a departure for the series: Princess Zelda herself only gets a passing mention, neither she nor the Triforce actually appear, and the game abandons the familiar Hyrule setting for the strange island of Koholint, where Link finds himself washed up after a shipwreck.

Compelled to find a way home, the Hylian hero is guided by a mysterious owl to collect eight mystical instruments in order to awaken the Wind Fish – a gargantuan guardian deity of sorts – and return to Hyrule.

Technologically speaking, Link’s Awakening pushed the Game Boy almost to its limits – director Takashi Tezuka had intended for it to be a port of the SNES classic A Link to the Past, before it became an original but smaller effort – but given the restrictions of the hardware, the portable adventure wouldn’t prove a major influence on what other games could do mechanically. Yet what the game lacked in power, it made up for in heart, becoming one of the first games from a major publisher to push players’ emotional buttons.

Games had offered twists before (Metroid’s reveal that Samus was a woman came almost a decade earlier, for instance) but those at best elicited surprise. Link’s Awakening showed developers you could use games to deliver an emotional gut punch, and that lesson has subtly impacted countless narratively-led games since.

warning: major spoilers  ahead for the very end of the game!

See, Link’s adventure on Koholint was ultimately heart-breaking. After mingling with villagers, quelling a surge of monsters on the island, and generally solving inhabitants’ problems large and small, Link successfully rouses the Wind Fish… and everything disappears, revealed as a product of the leviathan’s dream. Every creature, every person, even the bits of history, mythology, and culture that you uncover on Koholint fades from existence.

To really twist the knife, people and animals – who talk and have their own village, oh god– flicker into nothingness at their happiest, dancing and singing as they cease to be. On the surface, it fits the “it was all a dream” trope, but in reality it was far sadder. The lives you’d spent hour upon hour getting to know, to care for, had mattered but were now gone, and that realisation brought on the waterworks for me as a child.

In retrospect, there are lots of hints throughout Link’s Awakening that something isn’t quite right. It plays with reality, presenting objects, characters, and enemies that shouldn’t be in the Zelda universe. Goombas, Chain Chomps, and Bloopers from the Mario games crop up throughout, an evil version of Kirby features as a dungeon enemy, and an exiled prince Link helps is a crossover character from obscure Japan-only game The Frog for Whom the Bell Tolls.

The closest Nintendo’s ever got to a drug-induced odyssey

At the time, these cameos may have only clued in experienced gamers that something was off, but blurring the line between what fits in a particular game’s world was low-key psychological trickery, helping set a precedent for later titles to dabble with player perception.

It would be a massive over-reach to say “No Link’s Awakening, no Silent Hill“, but this most humble of Zelda games showed it was possible to be more ambitious with how interactive stories are told and how expectations can be manipulated.Whatever influence the game has had on the wider industry, there’s one thing Link’s Awakening did very differently to Zelda games prior or since – here, Link is arguably the villain.

As you progress through the game’s eight core dungeons – a ninth, the Color Dungeon, was added to Link’s Awakening DX on Game Boy Color in 1998, but it’s non-essential to the story or even to completing the game – the bosses become increasingly angry, desperate even.

It’s not because Link is advancing on their evil master, as with Ganon’s acolytes in other Zelda titles, but because with each dungeon conquered, each instrument acquired, Link is one step closer to waking the Wind Fish, the sleeping titan whose dreams maintain Koholint’s very existence.

The bosses are dubbed Nightmares and described as corruptions invading the Wind Fish’s slumber, but almost everything players see of them is in reaction to Link’s presence, trying to stop his progress and end the threat he poses. For the first time, Link is no hero – he’s the Great Destroyer, dooming the island and everyone on it if he succeeds in his quest. BioShock’s“would you kindly” reveal felt tame in comparison.

Returning to Koholint on the Switch was a melancholic experience, then. Developed in conjunction with Grezzo, the studio behind the delightful action RPG Ever Oasis on 3DS, the update – launching alongside the handheld-only Switch Lite, in a nice parallel to its original platform – is an almost slavishly loyal remake of the Game Boy original, to the point it even keeps some of the seemingly redundant elements intact (if there’s a reason you still end up with a spare key in the Key Cavern dungeon, I’ve not discovered it in over 20 years).

It wisely keeps the top-down view of the original, recreated with an almost tilt-shift effect, but updates the cartoonish aesthetic with character models that look almost toy-like. Yet even as I relished revisiting the familiar locales and seeing old friends, the experience was tinged with a listless gloom, knowing what was to come.

There are tweaks for the Switch version – a side-quest to collect powerful Secret Seashells is massively expanded, models of Mario series monsters can be won from a minigame and placed in villagers’ houses, and – most prominently – the Camera Shop from the Game Boy Color version is replaced by Dampé’s Shack, where you can create, battle through, and share your own dungeons. These are additive though, more time to spend on Koholint before the inevitable, tragic end.

Part of the swirl of emotions I experienced as I rediscovered Koholint was undoubtedly driven by nostalgia, but returning was also a reminder of Link’s Awakening’s legacy. Its themes of loss still echo, both personally and in the games it helped influence by showing, when the industry was still learning what it could do and the impact it could have, that not every story the medium tells has to have a happy ending. In that, Koholint lives on.