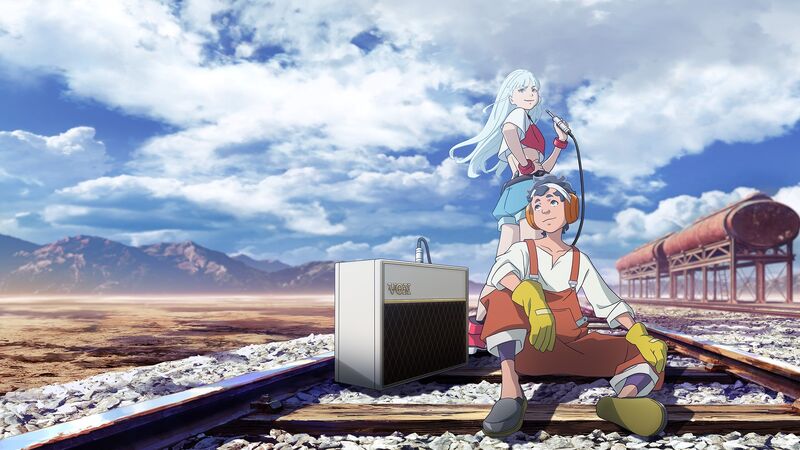 What Makes ‘Listeners’ a Stand Out Mecha Show

Mecha fans, get ready for your new obsession! Listeners follows Echo Rec and a mysterious woman known only as Mu in a dystopian future filled with shadowy monsters called the Earless. Humanity has kept these bizarre threats at bay by relying on mech warriors called Equipment that are piloted by a select few, known as Players. Obviously there are some familiar elements to other robotic adventures, but what makes Listeners unique is its loving respect for classic rock bands and music as a whole. This isn’t just restricted to its soundtrack either, the entire world of Listeners is drenched in musical references and name drops that are genuinely a joy to discover as each episode goes on.

Echo and Mu live in a post-apocalyptic world without music after the tragic disappearance of Jimi Stonewall at Project Freedom Festival. The legendary rock god (obviously named after the real-life Jimi Hendrix) fought off the Earless with his Equipment, the Duel Showman, before disappearing in a terrifying burst of green energy. The truth behind his absence drives Mu and Echo forward as Mu realizes there could be a connection between her missing past and Stonefree himself. The series also delivers a fascinating reason behind the existence of the Earless and why they constantly plague humanity, but if you haven’t seen all 12 episodes on FUNimation yet, don’t worry, we won’t ruin the twist!

The driving force of the series stems from the mystery surrounding Mu’s identity and the urban legend of Jimi Stonefree. Although Mu’s past has deeper ties to the mythology in Listeners, Echo’s story proves that not every main character needs to be “the chosen one” and can be a normal human being without literally evolving into something greater or having superpowers. Of course, his attitude and character arc change when his worldview is challenged later in the series, but it’s still refreshing to see someone without any special abilities or fighting skills be a main character in a bombastic adventure like Listeners.

Mu (or μ, as it’s written) is more stereotypical as a lead character, but that makes her no less interesting. After all, it’s her introduction that sends Echo on his wild adventure to fight the Earless in his dreams of becoming a Player like Mu. As each episode ticks by, audiences will no doubt concoct theories about her true identity — but Listeners has an excellent way of pulling the rug from under those ideas in later episodes. Her partnership with Echo is certainly turbulent at times thanks to their conflicting personalities, but they’re a perfect pairing when it comes to fending off hordes of Earless.

It isn’t just the towering monsters that plague the post-apocalyptic world, Mu and Echo go up against a number of other threats who are a breath of fresh, villainous air across the series. Our favorite enemies are the Neubauten Sisters, who all cover their faces with bizarre masks and have a fanatical fanbase. Although when Echo first meets the trio he freaks out and asks for their autograph, how cute. Don’t get too close, they’ve got a wicked edge.

In the duo’s search for answers, they come across a number of helpful characters along the way, like the lovable Valentines. Kevin and Bilin Valentine mentor Echo and Mu on how partnerships are meant to make each other stronger instead of squabbling about differences. Did we mention the married couple flirt by reciting My Bloody Valentine lyrics to each other? If tracks like Feed Me with Your Kiss are anything to go by, the married couple definitely has interesting chemistry together. The soundtrack of their debut in episode three even matches the shoegaze style of the iconic band.

The real selling point of Listeners is its soundtrack, which uses a number of musical styles as Echo and Mu travel through the world. For a world without music, the soundtrack feels like it’s reintroducing the rousing riffs and stunning solos back to the population as the Players decimate the Earless. Aside from the distorted strings, it borrows from all corners of rock and roll before branching out into genres like metal and garage. Every battle boasts a high-spirited score to perfectly inspire the audience and provides a unique musical experience. It’s the closest to watching live music as many of us will get for now.

While the series isn’t particularly subtle when it comes to referencing some iconic musicians, at least they’re fun. Aside from each episode being named after well-known songs and albums, most of the characters are direct references to some of the most famous musical figures. Our favorite? Denka. He’s designed to look like Prince and his theatrical flair makes Mu and Echo’s tour through the red light district pretty entertaining. But most of the main characters are Easter eggs themselves, with Echo referencing the Binson Echorec machine used by Pink Floyd, while Mu is the name of a major chord.

Later additions include Kurt Cobain look-a-like Nir and the nefarious Hole, who’s designed to look like Courtney Love in the Teen Spirit episode. The writers behind Listeners clearly had plenty to say about a number of real-world musical relationships, as their arcs mirror the dynamics of the most famous couples and duos over the decades. There are plenty more Easter eggs throughout the series, but we’ll leave you to discover them for yourself.

Okay let’s really address the mecha in the room. Obviously one of the biggest selling points of the series is the exhilarating robotic fights the Players get into. Listeners boasts some of the most unique mecha designs in the genre like Nir’s Equipment, Melvin. It maneuvers using eight mechanical tentacles, meaning the machine is an incredibly agile piece of weaponry. Our favorite Player Denka’s Equipment is a floating palace which shoots near-limitless purple lasers to eliminate the Earless. His electricity bill must be huge.

Surprisingly, one of our favorite suits from the show is a four-legged beast called… Sue? It’s named after My Bloody Valentine’s song Sueisfine and it’s piloted by the lovable Valentine couple, of course. Designed to look like a Centaur, the crimson suit comes with an intimidating spear which is devastating in battle. Just watch how effective it is when Bilin fights the Neubauten sisters! That final blast she delivers is just too cool.

With a truly unique soundscape, riveting adventures and an occasionally philosophical storyline, Listeners is absolutely worth your time.

FunimationCon 2020 is a free two-day stream of cosplay meetups, industry panels, Q&A sessions, and more. The con is coming to you July 3-4.