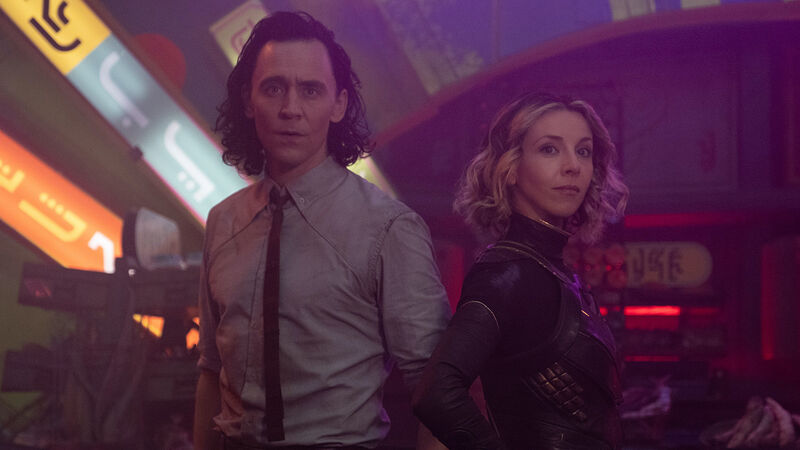 From the TVA to The Void: Designing the Look of ‘Loki’

Suffice to day, working on Loki has kept the show’s Production Designer, Kasra Farahani, busy. Jumping through different worlds and different eras, the Disney+ series has added many notable new environments into the Marvel Cinematic Universe, while also introducing us to its centerpiece set, the Time Variance Authority headquarters.

With the Loki finale debuting this week, Fandom, with input from Fandom’s MCU Wiki, spoke to Farahani (whose many credits include Birds of Prey, Men in Black III and multiple MCU projects) about the series, creating the TVA’s distinct look, the approach to important elements like Lamentis and the bowling alley Loki and his fellow variants spend time in and more.

Though Farahani has now worked on several MCU projects, it’s notable that the first one he was involved in was 2011’s Thor, which of course is where we first met Loki. When it came to now returning to work on a series centered on a character from that film, Farahani observed, “It was a funny happenstance to come full circle and end up on Loki. Even some of the Asgardian language we came up with on Thor 1 found its way back into Loki. And we had a brief few moments in Asgard in Loki.”

On the Fandom MCU Wiki, Hamedolk wondered “Was there a particular mindset at the creation of all sets?” for the series and Farahani explained to Fandom, “Everyone was all on the same page about building out this world as big as we could.”

Since Thor, Farahani has been involved in Guardians of the Galaxy Vol. 2, Black Panther, and Captain Marvel, but he still felt Loki was a different beast. “It’s been a wild ride but also being on Loki after having worked on a few different Marvel projects over the years, this one feels the most like a world of its own. It’s literally leaving the timeline of the other films. It felt like a whole new chapter.”

As wild as Loki gets, Farahani said there were few limits set or concerns about going too far. “Our Creative Producer from Marvel, Kevin Wright, along with Kevin Feige and all of those guys, they were all super supportive for us. I think this is what they always want and what fans always want, to acknowledge the source material and precedent in the MCU but to make it bigger and create more worlds.”

The most prominent set in Loki of course if the TVA, which has made a big impression on fans. Ella1269 wrote, “The mixture of old and new is perfect. TVA looks like something out of a 50s or 60s sitcom, but then so futuristic at the same time when traveling to these other worlds.” Wrote Sandtrooper320, “I love the retro-future look of the TVA. Clicky clacky manual typewriters and reams of crinkly paper? Yes, please.”

Farahani said that retro-future approach was always the plan, noting, “Even in the source material, if you look at the comics, the TVA in the comics has this post-war, bureaucratic vibe with everyone at these armada floating desks. On top of that Michael Waldron, the creator and head writer, he wrote a very concise line that the show was ‘Mad Men meets Blade Runner,’ which is very evocative and tells you a lot. And separate from that, myself and Kate Herron, the director, before we’d even met each other and had a chance to discuss the project, felt that Terry Gilliam’s Brazil was an obvious reference for this because of the anachronism and the heavy bureaucracy. That was definitely an inspiration for us.”

From there, Farahani explained, “Then became the process of trying to figure out how to reconcile this specific version of Mid-century modernism that we were pursuing, with this Blade Runner, gritty, industrial, future analog technology look. In terms of the Mid-century modernism it felt like European-style mid-century brutalism from the UK and a Soviet influence from Eastern Europe — these big, stoic, monolithic environments — helped us inspire the scope and scale of the environments like the time theater and chrono monitoring. But also the western or American version of mid-century modernism, with the warm palettes and whimsical patterning, took over the surfaces and finishing of the spaces. That worked for us to create the environment that the TVA is both inviting and terrifying. You don’t know how to feel about these spaces, which was the goal.”

On the MCU Wiki, Ludvig Flodin expressed love for “the look of Lamentis,” the planet from the third episode, while ReadingIsLifeee admired both “the focus and effort put into the sets” and the use of color on Loki.

Discussing the depiction of the doomed moon Lamentis-1, Farahani said coming up with its look, “Was really fun. There’s source material that shows it as a purple planet so we proposed [using] that. We wanted to show the pit mining and the brutality of mining so we proposed it as a black-crusted planet that just beneath the surface has a really rich, purple aura. So if you see it from the sky it looks like black Swiss cheese with purple on the inside. That was a lot of fun, from the quarry that we shot the beginning scenes in to the train interior we built to Sharoo at the end, that was a completely practical set up to sixteen feet. That was a crazy episode and I could talk about that for an hour just by itself. Great collaboration from [Stunt Coordinator] Monique Ganderton and the Stunt Department, Autumn [Durald] the cinematographer, special effects and of course Kate and Kevin guiding it. It was an awesome episode.”

The penultimate episode of Loki then brought viewers to the Void at the end of time and within the Void, a distinctive, heavily decorated and offbeat bowling alley where a group of Loki variants took refuge and used as a makeshift palace.

When it came to the various locations the series has included, Vonaralaufeyson2004 wrote, “My favorite is probably the… Loki bunker? I don’t really know what it is called but the moment I saw it I went ‘Yup, that’s something Loki (or Lokis) would make and live in.’”

Told about that enthusiasm for the Loki Palace, Farahani replied, “That’s really cool to hear! Actually, that was one of the environments where we had a lot of leeway, that the script just described a ‘subterranean temple,’ so it became us proposing things. The Void itself is ultimately a dumping ground of deleted, abhorrent realities, just dropped down into this place and unceremoniously devoured and stacked on top of each other, creating this sort of strata of different realities. What I pitched was this idea of doing this bowling alley because I thought it would be fun but also because, being subterranean, we could smash it in a way that put fractures into the bowling floor and these land lines would just create this vector, drawing your eye to this throne. I pitched the throne would have been raided out from a deleted Christmas time shopping mall, like a mall Santa throne. That idea was well received and that’s what we ended up doing.”

The bowling alley then was added to in many ways, with Farahani noting, “From the alien lines growing through it to the Polybius machine that’s in there, to all the beautiful, strange, multicultural, anachronistic set dressing that Claudia [Bonfe], our decorator found and brought to it, it is a kind of quintessentially the Void in that it’s all these realities slammed into each other. In the art department we create these micro narratives for ourselves that are even more granular than what the script says to create these specific and lived in designs. We imagined that it wasn’t even a terrestrial bowling alley, it was an alien bowling alley. In the background, there are Bowler of the Month portraits that are not quite human. You don’t see them in the show. They’re too distant in the background. But it’s there and it’s helpful for us to draw our logic in designing these places.”

The fifth episode was filled with Easter eggs, some from the MCU’s past, some from Marvel Comics, and some based on real life items or urban legends, such as the Polybius video game Farahani mentioned.

Asked at what point of the process elements like those Easter eggs become added in, Farahani explained there was no single answer. “It’s a ton of stuff throughout. Some of it’s in the script. Some, like the Thanos Copter, is stuff we proposed in the art department and did concept art for. And some of it, like the Polybius machine, is something that our Creative Producer proposed. There’s a ton in there, like the USS Eldridge, that the writers proposed. It’s a true collaboration. There’s a great blueprint in the script and as you develop it and build out the world, many other good ideas emerge.”

Farahani had to stay secretive on the finale and that castle glimpsed at the end of episode five that Loki and Sylvie are about to travel to, but having gotten the opportunity to design so many different environments so far for the show, he did note, “This show has been wall to wall crazy and [constant] new stuff. It’s what makes the show so awesome. It feels like five or six different Marvel movies. You’re anchored in the TVA — narratively and visually it’s like your home base — but you’re going out to all of these wild and exotic new worlds which is what I think makes the show feel so huge. I think fans will not be disappointed with what will be yet another visual and narrative feast in episode six.”