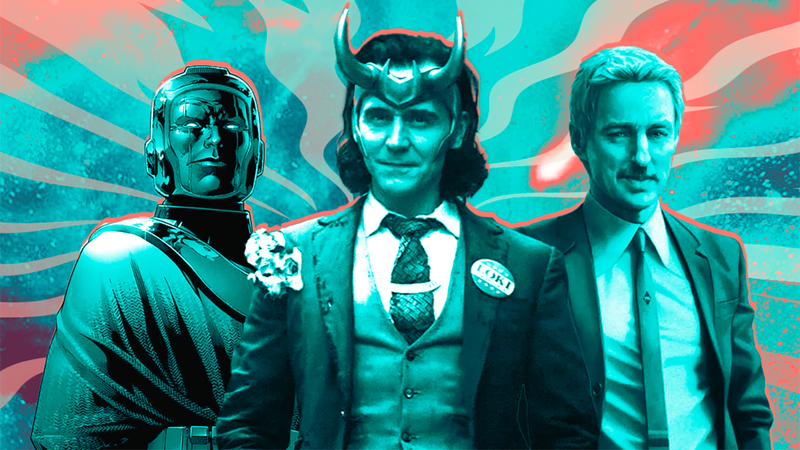 From ‘Loki’s TVA to Kang: The Marvel Time Masters Coming to the MCU

To borrow a phrase from another beloved franchise, things are about to get timey-wimey in the Marvel Cinematic Universe. With the recent release of a new Loki trailer, we all got a bit more of a look at the trickster’s exploits working for the Time Variance Authority to repair the chronal disturbances he created during the events of Avengers: Endgame.

In the trailer, Owen Wilson’s Mobius M. Mobius explained the general concept of the show: “We protect the proper flow of time. You picked up the Tesseract, breaking reality. I want you to help us fix it.” This opens all sorts of doors that will be explored both in the June 11-debuting Disney+ series and beyond.

With all of the twists, turns, backflips and roundabouts that come from introducing time travel into a world that already includes the big three — aliens, wizards and robots, of course — this seemed like a good time to run down the time travel mechanics of the MCU so far and how some of the upcoming characters and organizations might operate based on their comic book counterparts.

A Brief History Of Time… Travel

Before getting into the new players coming up on the scene, let’s look back and discuss the old hats at time travel in the MCU. First up, you have the Time Stone, one of the vaunted Infinity Stones sought by Thanos. That particular artifact — which allowed the wielder to warp and travel through time any way they saw fit — remained inside the Eye of Agamotto in the possession of the Sorcerer Supreme. Before Stephen Strange used it against Dormammu in the Dark Dimension, the Ancient One watched over it. During Thanos’ quest, Strange used the Time Stone to look at a variety of potential futures and found only one where they could ultimately save all the people the Titan intended to kill and then handed it over.

Meanwhile, in the wake of Ant-Man, Wasp and Hank Pym saving Janet Van Dyne from the Quantum Realm, the quartet looked to continue exploring that fantastic place for a way to help cure Ghost’s condition. Scott Lang entered the realm to harvest energy, but could not come out because Hope, Janet and Hank were all killed when Thanos completed the Infinity Gauntlet and snapped his fingers. However, Ant-Man made his way back five years later — which he experienced as mere moments — and explained to the Avengers that time could be traversed by way of the Quantum Realm.

Hulk, Iron Man, Captain America, Black Widow, War Machine, Hawkeye, Nebula, Rocket, Thor and Ant-Man figured out how to use special suits and a limited source of Pym Particles to access the Quantum Realm and grab the Infinity Stones from three specific points in time. Ultimately, the Time Heist plan worked and they were able to use a newly-created Infinity Gauntlet to stop a time-traveling Thanos and bring everyone back who had been blipped out of existence. Afterwards, Captain America returned the Stones to their relative places immediately after they were taken so as to keep the time flow moving along correctly.

Spacing Out With Loki

During the Time Heist, Iron Man, Ant-Man and Captain America traveled to New York City in 2012 to steal the Space Stone — which was then known as the Tesseract — after Loki used the Chitauri to attack the Big Apple. During the op, things went sideways and the Stone slid right towards the mischief maker who used it to teleport himself away.

Considering we already saw Loki taken away to Asgard at the end of The Avengers — not to mention his subsequent appearances in Thor: The Dark World, Thor: Ragnarok and Avengers: Infinity War — it’s understandable why Mobius and the Time Variance Authority would be so upset with him considering he could have used that Infinity Stone to go anywhere and do just about anything when he was truly supposed to be taken to Asgard and locked up. Also note that he was referred to as a “Loki Variant” in the trailer – and it’s even on his clothes!

In the comics, the Time Variance Authority acts as a kind of police force focused on keeping time travelers and reality-hoppers from destroying the entire space-time continuum across every reality. The group was first mentioned back in 1986’s Thor #371-372 when they sent back the Judge Dredd-like Justice Peace from his timeline to kill a threat called Zaniac.

Often presented as an infinite office located in the Null-Time Zone filled with literally faceless drones, the incredibly bureaucratic group monitors everything and shoots problems up the ladder to managers — who all share the same face (modeled after the late Marvel writer/Editor Mark Gruenwald as an homage) — who then send out Minute Men as needed to stop chronal offenses and bring offenders before a council to pass judgement. The Fantastic Four and She-Hulk have been tried by this group in the past.

The TVA only has a few dozen appearances in the comics over the years. From the Loki trailer, it seems safe to say that the on-screen version will not all look alike or be faceless, but do seem to share the same basic structure from the source material.

It will also be interesting to see how or if a few of the time-related questions presented by Endgame will be addressed by the TVA either in Loki or further appearances, including what’s up with the Gamora from 2014 existing in the present? When Iron Man snapped Thanos and his forces away at the end of Endgame, how did that disrupt the timeline, given they had traveled from the past? Did Steve Rogers create an alternate reality, like the Russo brothers have posited in interviews, when he stayed in the past to be with his love Peggy Carter? Oh, and where did the Captain America shield that John Walker’s wielding in The Falcon And The Winter Soldier come from if the original was so severely damaged during the fight with Thanos?

By now you might think that Mobius M. Mobius is a pretty big deal in the Marvel comics, especially considering a major name like Wilson agreed to play him, but that is decidedly not the case. He’s only shown up in about a third of the TVA’s appearances, but has been an intriguing character. When the Fantastic Four was taken in by the chronal watchdogs in Fantastic Four #353-354, Mobius was the head of the Sub-Committee On Time Lapses And Synchronicity. He later gave the team a tour of the facilities, but things did not stay cordial for long and the FF broke out which did not reflect well on ol’ Mobius, especially because they screwed up a lot of the organizations files.

Linking him to one more name about to come up, Mobius was once tasked with replacing a missing file on a timeline where Kang the Conquerer established a dynasty. Along the way, Mobius even got a job offering from his quarry and used it to get a better place within the TVA. Later, he interacted with She-Hulk during her own visit to the TVA. Considering that the “strongest lawyer there is” will make her debut on Disney+ in 2022, it seems possible that Wilson’s Mobius M. Mobius could eventually appear on She-Hulk as well.

Conquering The Mystery Of Kang

Before moving forward with one more interesting timestream surfer from the Loki trailer, let’s take a jump and dig into the aforementioned Kang the Conqueror, who will be played by Jonathan Majors in Ant-Man And Wasp: Quantumania. This character has a rich and deep history spreading back to the earliest days of the Avengers. Thanks to a variety of identities, including Rama-Tut, Immortus, Scarlet Centurion and Iron Lad, Kang has made his presence felt in both positive and negative ways for the entirety of human history going backwards and forwards.

We know next to nothing about the third Ant-Man film, which begins production soon, but it would not be beyond the realm of possibility to find the Quantum Realm-exploring Scott Lang, Hope Van Dyne, Janet Van Dyne and Hank Pym running afoul of a villain who is known for trying to take over every realm he can travel to with weapons brought back from the future. Whether he winds up in the MCU’s present or they wind up in one of his potential futures (or both!) remains to be seen, but it will surely lead to a wild spectacle either way. You also can not ignore the direct connection between Kang and Reed Richards of the Fantastic Four, given the FF is an upcoming MCU film set to be helmed by Jon Watts.

In addition to showcasing Loki himself and Mobius, the Loki trailer also prominently features Gugu Mbatha-Raw’s Ravonna Renslayer. This character made her debut back in 1963’s Avengers #23 when Kang traveled to the then-present from the 40th Century to bring the world’s mightiest heroes back to the future so he could prove his battle savvy to Ravonna, a princess who he had become smitten with. Not wanting anything to do with a commoner, she rebuffed his efforts. Later, just before dying after seeing him fight alongside the Avengers, she claimed love for him.

Now, this is where things get confusing because Kang was split into two different versions. One plucked her from out of the time right before she died — which created a new timeline — and they lived happily. The other Kang figured out a way to bring her back to life after her demise. She was into the Conqueror at first, but grew to hate him. There was also a lot of shape-shifting and body swapping for Ravonna after that which might hint at what she can do in Loki.

More than any other character on this list, Ravonna is the hardest to nail down when it comes to guessing what her role and connections might be moving forward. Maybe it’s just a time-based name plucked from the annals of Marvel comics related to time travel. However, just about everyone who shows up in these things does seem to have a more direct connection and Kang’s imminent introduction is hard to ignore here. This version of Renslayer might already be with Kang and secretly working for him, potentially leading to a scene at the end of Loki revealing the character. However, it seems just as likely that Ravonna has already had her run-ins with the Conquerer and earned this gig with the TVA after that. Or maybe their first meeting will be seen in the, ahem, future…

The Multiverse Of Madness

And let’s not forget that the 2022 film Doctor Strange In The Multiverse Of Madness will deal with alternate realities, as will the Disney+ animated What If…? series. Shifting from one existence to the other might not be exactly the same as time travel, but any potential future does count as such. In the comics, these various realities received a designation with the main reality centered around Earth-616. To that extent, the MCU itself is Earth-199999.

Between the realities that the Master of the Mystic Arts might potentially visit during his confrontation with one-time friend Karl Mordo — not to mention however the Scarlet Witch factors into the Doctor Strange sequel — and The Watcher’s look into a variety of potential branching-off points in history in What If…?, expect to see a few futures that may or may not have an effect on MCU projects moving forward, considering the most popular divergent timelines tend to eventually cross over with the main one in the comics.

How will all of these wild puzzle pieces fit together? Only time will tell.