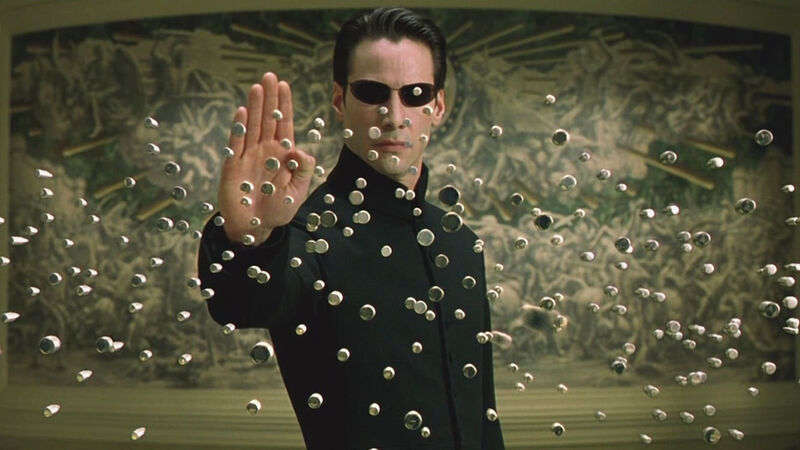 Hack the Planet: A Look at the ’90s Cyberpunk Explosion

Ah, 1990s cyberpunk, a genre flush with vinyl trench coats, evil corporations, synth-heavy techno, and mirrored sunglasses. With the advent of personal computers, science fiction writers became engrossed in virtual worlds, artificial intelligence, and concerns over new technology. Just as Mary Shelley expressed fear over medical advancements in Frankenstein, authors of the rising digital age shared their hopes and fears about computers. The result was cyberpunk, a gritty genre defined by relationships between man and machine.

Though cyberpunk started in the 1980s, it really gained steam in the ’90s. The cyberpunk films of the 1990s are all incredibly dated now, but there’s a special charm to them that can’t be denied. From Total Recall to The Matrix, ’90s cyberpunk shaped our current sci-fi landscape.

The Origins of Cyberpunk

Cyberpunk began in novel format, particularly in the works of authors like Philip K. Dick, William Gibson, Bruce Sterling, and later, Neal Stephenson. While Dick’s Do Androids Dream of Electric Sheep? was the basis of Ridley Scott’s monumental Blade Runner (itself one of the earliest cyberpunk films), Gibson’s Neuromancer is perhaps the first popular novel to really define the genre. The novel was inspired by Gibson’s earlier short story “Johnny Mnemonic” and John Carpenter’s film Escape From New York, which was in itself proto-cyberpunk. Neuromancer was the first novel to ever win the science fiction “Triple Crown”, winning the Nebula Award, the Philip K. Dick Award, and the Hugo Award. It tells the tale of a hacker trying to pull off the hack of the century. Hackers grew to prominence within cyberpunk media after Neuromancer.

The rise of Silicon Valley and early PC tech led to a handful of great cyberpunk films in the 1980s, including Tron, Videodrome, RoboCop, and the anime Akira and Bubblegum Crisis. Each 1980s cyberpunk title brought more to the genre, giving creators in the 1990s a wealth of references to draw from.

The first cyberpunk film of the ’90s was Total Recall. Based on Dick’s short story “We Can Remember It for You Wholesale” and helmed by RoboCop creator Paul Verhoeven, Total Recall was a critical and box-office smash. The film’s premise, about a construction worker who has troubling dreams and decides to go on a virtual vacation, was one of the first to feature virtual worlds in popular culture. The same year, the low-budget British sci-fi flick Hardware was released. Set in the same universe as the Judge Dredd comics from 2000 AD, Hardware is a delightfully weird post-apocalyptic romp about a killer robot.

Early ’90s cyberpunk films seem to focus more heavily on the horror aspects of the genre than their later counterparts. Though they occasionally pose larger existential questions and concepts, these early additions to the genre seem more focused on the man vs. machine element of cyberpunk than anything else. Other genre entries from this period are bleak and violent. The Lawnmower Man, Freejack, and Death Machine are great examples of the era.

1995 is the year that cyberpunk went mainstream. To some, this is the year the “movement” died, though that’s an elitist way of looking at it. The internet was becoming easier to access and big technological concepts seemed more feasible. Sure, these were the years of dial-up and yelling at your mom to get off the phone so you could check your e-mail, but it was still the World Wide Web. It was vast and new and amazing, and as a result, cyberpunk films blew up.

One of the most canonical cyberpunk films from ’95 is Johnny Mnemonic. Based on Gibson’s short story, the film stars Keanu Reeves, who has since become part of the cyberpunk canon himself. The movie didn’t do well in part because of studio-required changes. Instead of focusing on the protagonist of Gibson’s story, Molly Millions, they chose to focus on Johnny (Reeves). They reduced Molly to Jane, Johnny’s sidekick and love interest. Gibson fans were irritated and mainstream audiences didn’t get it. Johnny Mnemonic did poorly both critically and at the box office, and many other cyberpunk films from ’95 suffered the same fate. Attempts to cash in on beloved comic properties like Tank Girl and Judge Dredd went poorly, souring cyberpunk for everyone involved.

Hackers almost seems like a parody of cyberpunk movies, though it isn’t self-aware enough to be one. The film launched Angelina Jolie and Jonny Lee Miller’s careers and became a cult classic in its own right. Hackers pretended to be smart, but it feels like The Goonies of cyberpunk. It’s fun because of nostalgia and just how cheesy it is, but there are few actually redeeming factors about this attempt to cash in on a trend and make it marketable.

Americans weren’t the only ones making cyberpunk films like mad in 1995. Much in the way that technology was spreading across the globe, the cyberpunk genre also boomed around the world, particularly in Asia and Europe.

Over in Japan, an anime film called Ghost in the Shell came out. The movie featured stunning animation and a cerebral story about a cyborg special operative. The anime was the first to seamlessly blend computer generated effects with traditional animation. It was a huge smash in Japan and went on to develop a cult following in the West. Ghost in the Shell has spawned three additional films and four anime series and is considered one of the greatest anime of all time.

Ghost in the Shell wasn’t limited by technology in the same way live-action cyberpunk films from this era were. By using animation, there was no need to create advanced props, sets, or animatronics. This kept costs low and allowed the team to create a cyberpunk world like no other. Despite being over 20 years old, Ghost in the Shell is still a gorgeous film with fascinating ideas about robotics, artificial intelligence, and the internet.

Over in Britain, British-American director Terry Gilliam released his enviro-anarchist masterpiece, 12 Monkeys. Based on the 1962 French time-travel featurette La Jetée, 12 Monkeys starred Bruce Willis and Brad Pitt. Pitt took on a role opposite to his usual typecast at the time and purposely made himself look strange and acted like a total madman. The performance earned him an Oscar nod and a Golden Globe win. The film’s story, about an eco-terrorist who wants to give the world back to the animals and the future he creates, is compelling and feels all-too-possible.

The film’s story, about an eco-terrorist who wants to give the world back to the animals and the future he creates, is compelling and feels all-too-possible. Twelve Monkeys used some of cyberpunk’s concepts and aesthetics but leaves out the man-vs-machine element entirely. In Gilliam’s cyberpunk horrorshow, the real battle is man-against-man.

The charm of cheesy ’90s cyberpunk films ended in 1995, as the genre moved in new directions. The most successful film from this period, The Matrix, would go on to change genre film for the next decade. The Matrix took all of the elements of cyberpunk and tweaked them just slightly. They used new information about the ‘net and wrapped it all up with a “hero’s journey”-style bow. The Matrix featured a kind of bullet ballet that films imitated for years afterward. This “gun-fu” style of action seemed fresh and new to Western audiences. The successful parts of the formula (trenchcoats, cool glasses, man v. machine) remained, while they left behind the less-digestible bits.

One of the weirdest films to come out of the cyberpunk genre of this era was David Cronenberg’s 1999 film, EXistenZ. In EXstenZ, a video game designer creates a virtual reality that you plug into via a bio-port in your spine. Cronenberg’s love of body horror is heavy-handed here because the plug going into the spine looks extremely sexual. The whole movie feels like one giant creepy fetish act, which doesn’t do it any favors. While there are a few neat ideas here about the relationships between humans and technology, EXistenZ is just too weird and gross to work.

Going in a complete 180, there’s The Fifth Element. Directed by French action-movie superstar Luc Besson, The Fifth Element is a stylish pop-art rendition of cyberpunk. It’s B-movie fluff that’s great entertainment but terrible sci-fi. The Fifth Element doesn’t really have any commentary on men and machines, and there’s no mention of the internet other than superhuman LeeLoo downloading data from it at incredible speeds. There are tons of visual elements that have their basis in cyberpunk works, but little more than that.

The Future of Futurism

Films from the early 2000s followed in the vein of The Matrix, so cyberpunk from this era is mostly super-slick and gorgeous. While this gives us amazing stuff like The Animatrix and Paprika, it also gave rise to comical failures like Dracula 2000. (Dracula 2000 is the spawn some producer saying “hey, let’s make The Matrix but with vampires. Everyone likes The Matrix and vampires.”) After the two Matrix sequels and every action movie that tried to mimic their formula, people had enough of cyberpunk for a few years.

Thankfully, there has been a recent resurgence in great films and shows about our fear of technology. The excellent film Ex Machina comes to mind, as does the UK series Black Mirror.

This year, we also have Blade Runner 2049 and Mute to look forward to. Long live cyberpunk – hack the planet!