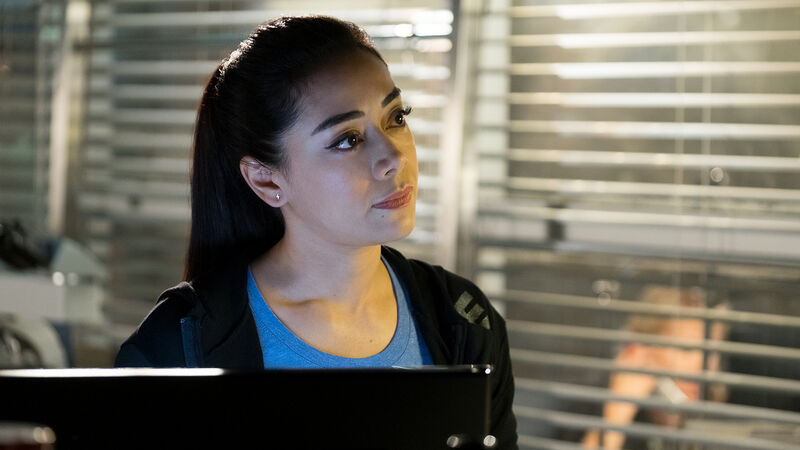 Lucifer is back this week, as Netflix debuts the second half of Season 5. Of course, as the passionate fanbase is aware, there is more to come beyond that – albeit with the bittersweet knowledge that the show’s sixth season will be the last.

Lucifer is based on the DC Comics character and one of the show’s stars, Aimee Garcia, is staying plenty busy in the comic book adaptation realm, as she’s also now voicing M.O.D.O.K.‘s wife, Jodie Tarleton, in the Hulu animated series Marvel’s M.O.D.O.K. I recently spoke to Garcia about that new series (you can read what she and her costars had to say about M.O.D.O.K. at this link) and our conversation also turned to Lucifer’s final seasons.

Read on for what Garcia told me about Lucifer’s conclusion, the power of its fanbase, the appeal of her character, Ella Lopez, and more, including her thriving writing career.

While Netflix is about to debut the second half of Lucifer Season 5, production has already been completed on the sixth and final season. As Garcia put it, “Everything’s in the can. We’re done.” When it comes to the oddity of having completed production but still having plenty to air and for viewers to see, she remarked, “I feel like that keeps the show alive because it’s like a fun little secret that they haven’t seen yet that I think they’re gonna love. I can’t wait for them to see it. They’ve pulled out all the stops. That’s it, we’re done, there’s no Season 7, there’s nothing like that, so the writers really left it all out there.”

She elaborated, “I don’t mind that we’re so far behind in shooting it because I get to experience it again with them. I haven’t even seen the episodes. I watch the episodes with the fans and sometimes they watch it before me, because I’m working on something or shooting, so I’m like, ‘How was it? Did I suck? Was it good? How did we do it? How did they edit it?’ So sometimes I get my news from them.”

Garcia couldn’t say much about plotlines to come, but teased, “They should expect an epic musical episode and they’re going to definitely need some Kleenex next to them. They’re in for a treat. I will say I think we end really strong and for Ella personally she has a really strong Season 6, so Season 5 definitely is — I gotta be careful with my words cause I’m gonna have an angel strike come down — but they’re in a for a treat and our writers just crushed it. I think it’s gonna be our best episodes yet.”

Lucifer had proven to be a very durable series, having survived being cancelled by FOX after Season 3 before Netflix saved it and then earning itself an additional sixth season, after Season 5 was intended to be the final one at one point.

Garcia has a lot of affection for the incredibly supportive fanbase who have helped make these decisions happen, saying, “They’ve been with us for 5 years and they’ve resurrected us from cancellation. I call them our little angels from all over the world. I just want them to know that we’re here because of them and I think they’re gonna be very satisfied with how our story comes to an end.”

She noted she’d had a ton of great interaction with the fans, explaining, “I’ll ask them what shirts I should wear for my character and I’ll end up wearing them on the show. They are so special and I was so proud that we’re all different ethnicities and ages and sexual orientation and cultures and languages. We have fans from 8 to 80 and they love Lucifer just as much. Everyone has their favorite character and everyone sees themselves in the different characters for different reasons. I would say it’s the best fanbase out there. Lucifer fans are the most fervent and passionate fans that I have ever met and I’m so proud to be a part of it.”

Lopez felt the fan’s love for Ella especially stood out given the nature of the character, as she noted, “I’m not like a cool angel or a devil or a cool demon. I’m just a big dork that speaks Klingon and has a pet chicken in the bathtub and is a forensic scientist. When I go to these comic cons, it’s so heartwarming when they dress up like a forensic scientist. They put the bun in and the glasses and the camera on and the gloves.”

Regarding what the appeal of Ella is, Garcia sad, “She sees the best in people and isn’t judgmental so when I see people cosplay her and call her the avatar of the fans, I’m just really grateful. I’m gonna miss her because she was a cool little bean who just wanted to hug people.”

I couldn’t resist asking Garcia if she’d retained any of the Klingon that Ella knows and she said a bit for me, laughing and adding, “It’s a little rusty but you give me about a week at a Klingon bar and I’ll be rocking and rolling.”

In the midst of her busy acting career, Garcia has also become quite a prolific writer alongside former WWE superstar AJ Mendez. The two formed a company, Scrappy Heart Productions, and have since teamed together to write comic books based on GLOW and Dungeons & Dragons and it was recently announced the duo collaborated on the screenplay for the sequel to 47 Ronin.

Regarding their work together, Garcia said, “AJ and I had a blast writing the 47 Ronin sequel and writing for strong female characters and a diverse cast and now we’re creating our own original content. We’re creating our own original graphic novel and basically creating the change that we didn’t have as kids. We talk about it all the time. We’re like, ‘Was there anybody who looked like you in comics or did you go to a movie and did anybody look like you?’ ‘No, no.’ ‘Well let’s just create it ourselves.’ We just wanna leave the world more diverse, especially in the sci-fi / comic space and genre space. I do think genre itself is very inclusive but AJ and I just wanna pay it forward and open doors and so far we’re doing it. They’re starting to cast for the 47 Ronin sequel and it’s a two-hander with two badass female samurais, so we are proud to say that it’s a little part of a change. Hopefully the best is yet to come and we can’t wait to share with you our original genre piece that we are currently writing now.”

Garcia and Mendez’s writing will also be seen in an upcoming new Wonder Woman comic and Garcia revealed, “I created a 16 year old Latina with glasses who may or may not resemble Ella; it might be my little wink to Lucifer fans. It’s a wonderful little story with Wonder Woman that I never had as a kid, done for the Wonder Woman: Black & Gold series, which begins in July. AJ and I didn’t write that together. I  wrote mine and AJ wrote hers and my story will come out in August. It’s only 8 pages, it’s short, but I am so happy that I created a 16 year old Latina who gets to have a little story with Wonder Woman. I was just floored.”

Regarding her second career, Garcia remarked, “Acting is great but writing is just exceptionally fulfilling and I just get giddy.”

CATCHING UP WITH JAMIE

Garcia was a cast member on Dexter, where she played Jamie Batista, and while she’s not a part of the new Dexter limited series coming to Showtime later this year, given we’re gonna find out what Dexter Morgan is up to, I asked Garcia where she thought Jamie had ended up.

“Oh man, hopefully she has better taste in men,” Garcia replied. “Not the best taste in men, that one. I see her as having graduated school, I always loved that she was an educated girl and obviously her great relationship with Batista, because that’s her older bro. I think she’s probably either continuing her child psychology studies or she’s working as a social worker somewhere, but still looking great in a bikini because, you know, she’s a Miami girl. She’s having dinner with her family and Batista every Sunday.”

The second half of Lucifer Season 5 debuts Friday, May 28 on Netflix.

You can explore much more about Lucifer at Fandom’s Lucifer wiki.