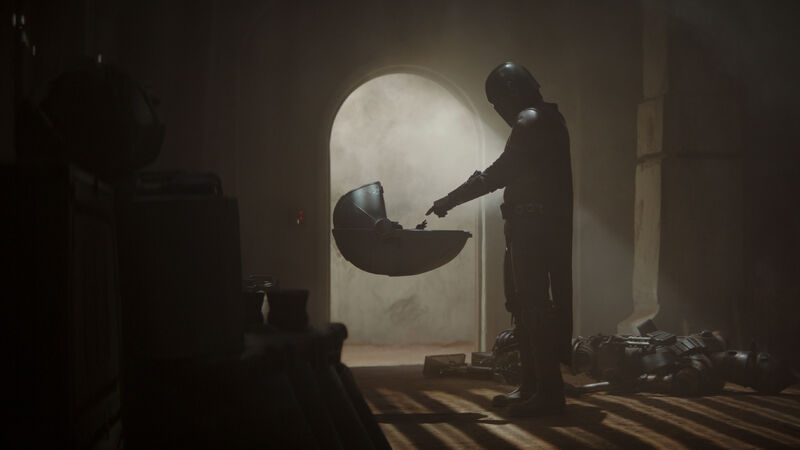 Will ‘The Mandalorian’ Tie Directly Into ‘The Rise of Skywalker’?

SPOILER ALERT: Warning, this article contains potential, unconfirmed spoilers from Star Wars: The Rise of Skywalker and The Mandalorian. Proceed at your own risk.

The Mandalorian (which you can watch now on Disney+) gives Star Wars fans a reason to wake up happy on Friday mornings. The first live action Star Wars television show drops on the streaming service at midnight Pacific Standard Time (3 a.m. Eastern time) with a new installment about the unnamed title character and the adorable alien everyone is calling “Baby Yoda.” That is except for the seventh episode, which will be made available two days early on the morning of Wednesday, December 18 — the day before Star Wars: The Rise of Skywalker hits theaters.

The timing has some Star Wars fans speculating that the seventh episode of The Mandalorian will reveal an important connection to Rise of Skywalker.

The Mandalorian has spent the first six episodes building out its little corner of the Star Wars universe with bounty hunters, Stormtroopers-for-hire, a Mandalorian diaspora, and the occasional idyllic farming village. Precious little time has been devoted to its central mystery: What, exactly, is up with that Baby Yoda?

Fans have little information to figure out for themselves what Baby Yoda (called “The Child” in official materials) means to the Star Wars universe. One popular theory, like this one posted in r/FanTheories, suggests that Baby Yoda might not just be a rare example of a member of Yoda’s species (which has never been given a canonical name in Star Wars), but a clone of the Jedi master himself. The idea ties into another common fan theory that we’ll see a clone of either Emperor Palpatine or Supreme Leader Snoke in the Rise of Skywalker. “So that leads me to believe it is in fact a clone of Yoda himself created by Palpatine as a potential apprentice or even a vessel for himself to transfer into using the force (that could be the immortality he picked up from Plagueis),” the Redditor Mad_at_reddit writes.

Another theory, posted by thesuperman97, lines up Baby Yoda’s birth with the birth of Anakin Skywalker. Assuming Baby Yoda is exactly 50 years old, and that The Mandalorian takes place 9 years after the Battle of Yavin in A New Hope, that means Baby Yoda was born 41 years before the Battle of Yavin (BBY). Since Anakin is 9-years-old in The Phantom Menace, which takes place 32 years before the Battle of Yavin, then Anakin was also born in 41 BBY. This theory plays into the idea that Anakin was the “chosen one” meant to provide balance to the Force, except instead he became Darth Vader. Baby Yoda, according to the theory, could have been born as the light side’s answer to Anakin Skywalker and truly balance the Force.

Some fans have also suggested that the Client, the mysterious figure who hires the Mandalorian to capture Baby Yoda, is actually Sifo-Dyas, the Jedi master who originally commissioned the clone army that Obi-Wan Kenobi discovers in Episode II. Sifo-Dyas never actually appears in the movie, but he does show up in the Clone Wars animated series (which you can also watch now on Disney+). The similarities between Sifo-Dyas and the Client are intriguing. Take a look at this video. The Client has a similar receding hairline as Sifo-Dyas (but not the elaborate topknot). Sifo-Dyas is said to have extensive knowledge of the underworld, which the Client is clearly comfortable operating in. Plus Sifo-Dyas, voiced by actor Paul Nakauchi, speaks with an unplaceable accent. The Client, played by German documentarian Werner Herzog, sounds like Werner Herzog.

Sharp-eyed observers have further identified that Doctor Pershing, who works for the Client and who was doing something mysterious to Baby Yoda until the Mandalorian rescued him, wears the same shoulder patch as the clones-in-training on Kamino in Episode II and Clone Wars.

Redditor Our_Warm_Opal summarized the implications of this theory, along with the timing of Baby Yoda’s birth: “Might Sifo-Dyas have also stolen a precious, rare Yoda blood sample from the Jedi archives, to give to the Kaminoans?” If the Client is Sifo-Dyas, he might have been hired by the cloned Emperor we potentially see in Rise of Skywalker to find and eliminate the potential new Yoda threat. Or Sifo-Dyas and Doctor Pershing are using this clone of Yoda to figure out how to create other Force-wielding clones, leading to the creation of Snoke or Palpatine. After all, Rise of Skywalker apparently takes place 35 years after the Battle of Yavin, so the events of The Mandalorian precede it by roughly 26 years — plenty of time to clone and raise a new Emperor.

If that’s the case, the altered Mandalorian release schedule would allow for the December 18 episode to at least hint at the clone origins of Baby Yoda or reveal Palpatine’s interest in the child, before audiences again see Emperor Palpatine in Rise of Skywalker the next day.

The more mundane explanation for the timing could be more about corporate synergy than any story connections between Episode IX and The Mandalorian. It’s possible Disney+ didn’t want to see their viewership numbers for The Mandalorian dip because so many Star Wars fans were out seeing Rise of Skywalker over the weekend, so they allowed the episode to air a couple days early to give people more time to see it. Another option is that they wanted to give an extra day for any new developments in The Mandalorian — even ones that are completely unrelated to Rise of Skywalker — to get at least a day’s worth of press coverage on publications like this one before most of the media attention turns to the end (for now) of the nine-movie Star Wars saga.

At the same time, other Star Wars movies have included Easter eggs that at least nod to recent Star Wars books and animated series. In Rogue One, for example, you get a glimpse of Chopper from Star Wars Rebels, and in another scene you can overhear a PA call for “General Syndulla,” the father of Hera Syndulla. The starship Ghost, from Rebels, has already been spotted flying near the Millennium Falcon in one Rise of Skywalker trailer.

So there’s a good chance that you’ll see some kind of connection between Rise of Skywalker and The Mandalorian. The question is whether it will be a minor cameo, or a complete game-changer. Meanwhile, watch The Mandalorian, Clone Wars, Rebels, and the Star Wars films on Disney+.