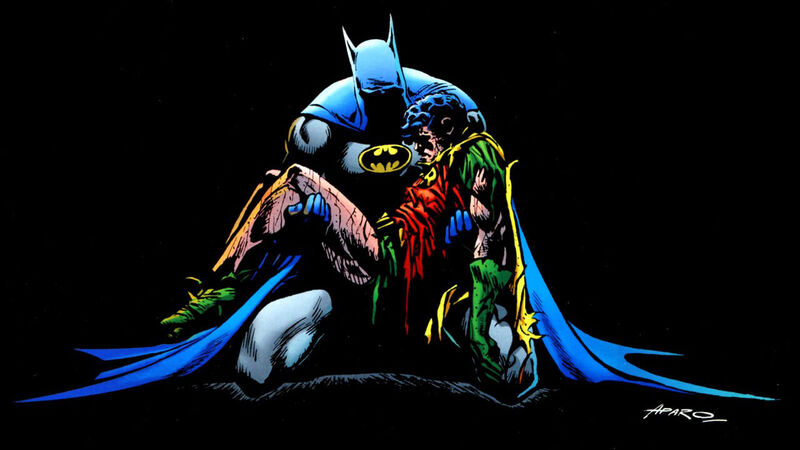 The Many Deaths of Robin

I should maybe call this a spoiler for Batman v Superman, but it was in the trailer and it’s been all over the news for months. If you saw the movie already, you know there’s a scene in the Batcave that reveals Batman had a Robin at one point in time. We know this because we see his costume hanging up, defaced with graffiti by the Joker. The movie doesn’t elaborate on how this Robin died, or even which Robin it was. Zack Snyder has addressed the history a little, but we still don’t have a lot of information. I thought it might be fun to take a stroll through the history of dead Robins, just to look at how Robin dying has been handled in the past.

The original dead Robin was Jason Todd, the troubled delinquent who took over when the first Robin retired. It’s an iconic image, Jason Todd’s costume hanging in the Batcave as a reminder of his sacrifice. This visual was introduced in Frank Miller’s “The Dark Knight Returns“ which takes place far in Batman’s future.

Jason wouldn’t be killed off for real until several years later, in the storyline “A Death in the Family.” DC actually held a phone-in campaign to decide whether or not he would die, letting the fans choose. A lot of people thought they wouldn’t go through with it.

The story saw Joker capturing Jason Todd, beating him nearly to death with a crowbar, then leaving him in a building set to explode. Jason proved he was a hero to the end, using his final moments to save the mother who had betrayed him. The failure to save Jason would haunt Batman for years to come. There’s a pretty great Shortpacked! comic about it.

Of course, death rarely lasts forever in comics. Jason would later be resurrected, and return to haunt Batman more literally as the bloodthirsty vigilante Red Hood. There have been rumors that DC might adapt this storyline, “Under the Hood,” for the next Batman movie.

Jason Todd has been living again for awhile now, but there was a significant period where he was dead longer than he had been alive. His death, even if it was later undone, made a huge impact on Batman comics that has lasted until this day. It was the first time we really saw that Batman’s war on crime has huge personal consequences when he brings other people into it. The Dark Knight Returns was hugely influential, but Jason Todd’s death is the moment that really shifted Batman from the campiness of the 1980s to the grim seriousness of the 1990s.

Stephanie Brown, also known as Spoiler, did not have a very long career as the fourth Robin. Batman agreed to train her after the third Robin, Tim Drake, quit. Stephanie showed a lot of promise, but Batman fired her when she disobeyed a direct order in the field.

Devastated at losing the one thing she’d worked for her entire life, Stephanie felt like she had to prove herself at any cost. During War Games, she activated one of Batman’s secret protocols and accidentally plunged the entire city into a massive gang war. In the chaos, she is captured by the sadistic Black Mask.

Stephanie held her own at first, but eventually, it was too much for her. Black Mask tortured her until she told him everything he wanted to know about Batman’s plans. After being shot and left for dead, she barely managed to crawl to the Leslie Thompkins clinic.

Stephanie died of her injuries in a hospital bed, after a brief reconciliation with Batman. Batman apologized for the way he treated her and told her that she really was a hero. In her final moments, she was proud that she had been part of the legend, even if it was only for a short time.

Batman later learned that Leslie Thompkins had allowed Stephanie Brown to die, even though she could have been saved. Leslie hoped that Stephanie’s death would cause Batman to stop putting innocent people in danger for his crusade. Batman was so furious that he exiled Leslie from Gotham City.

There’s a happy ending to this one at least. It was later revealed that Stephanie actually faked her own death with the help of Leslie Thompkins, and she would return to become the new Batgirl. OK, so technically that means she was never dead and this section doesn’t count. They definitely pulled that “faked her own death” thing out of their butts, though. She was totally dead until they changed it.

Damian Wayne, the fifth and current Robin, is the son of Batman and Talia al Ghul. He is also one of the greatest redemption stories ever told in Batman comics. Damian was raised by the League of Assassins to become the true heir of Ra’s al Ghul, which meant he was trained to kill before he was trained to use the potty. Becoming Robin and resisting his killer instincts was a steep learning curve for Damian, but it allowed him to slowly learn what being a hero meant.

This redemption arc concluded in the pages of Batman Incorporated when he died fighting a monster called the Heretic. The Heretic was a clone of Damian designed by his mother to surpass him physically since Damian had turned on her. It was a moment of true heroic sacrifice. Damian might’ve struggled with his inner demons in life, but he died protecting innocents and bravely challenging a monster he knew would probably kill him.

Damian is, uhh… also… back to life now. Sorry. I recognize this is a list of dead Robins and everyone on this list so far is alive. There is nothing I can do about that.

Ooh boy, now we’re at the fun part! When a Robin dies in the main DC Universe, it’s a pretty big deal. But there’s a whole Multiverse out there. DC tends to be a lot less shy about killing off Robins in other universes… which makes sense. I mean, he’s a kid that fights criminals with guns while dressed like the aurora borealis.

The Nail is a story about how the DC Universe would develop without Superman. The Joker gets his hands on technology from Apokolips since nobody is there to stop him, and uses it to hold part of the city hostage. Batman tells Batgirl and Robin to stay back, but they follow him anyway because he’s in danger! The Joker kills Robin and Batgirl right in front of Batman and makes him watch, just for giggles.

Dark Knight of the Round Table

The Medieval Universe seen in Dark Knight of the Round Table had its Robin killed during a battle against Ra’s al Ghul. Ghul’s servant Ubu stabbed Robin in the chest, and Batman decapitated him in retaliation seconds later.

The Dark Knight Strikes Again is a weirder example, with a future version of Dick Grayson who has gone hopelessly insane. To be fair, I would probably turn evil also if I had to sit through All Star Batman again. Grayson has become a super-powered serial murderer, impossible to kill and obsessed with taking revenge on Batman. Knowing there’s no other way to kill Grayson, Batman tackles him into a pit of lava. Superman arrives at the last minute to save Batman, but Grayson finally burns to a crisp.

The psychedelic ’60s universe in Thrillkiller had its own version of the Joker, a sinister woman named Bianca Steeplechase. Steeplechase managed to kill this universe’s Dick Grayson by passionately kissing him with poisoned lips.

OK, this one is possibly cheating. Undead is technically dead, though, dammit! Red Rain introduced the Vampire Universe, where Dick Grayson’s parents are killed by the monstrous Vampire Batman. Grayson became a vampire hunter to kill Batman, but Batman turned him and made him into his partner instead.

The Narrow Path is a ninja-themed Elseworlds where Robin is the young Tengu, a student of the Bat-Ninja. The story opens with Bat-Ninja being killed, and with his dying breath he makes Tengu promise not to kill in his name. Tengu ultimately does avenge his master and commits seppuku out of shame for betraying his promise.

Emperor Joker was a fun story where Joker accidentally received the powers of Mister Mxyzptlk and used them to rewrite reality in his image. This isn’t an official death, but there’s a really fun scene where Joker kills all the Robins and brings them together to play cards with him.

Thanks for reading! For more information on Robin, check out the DC Comics Database on Wikia!