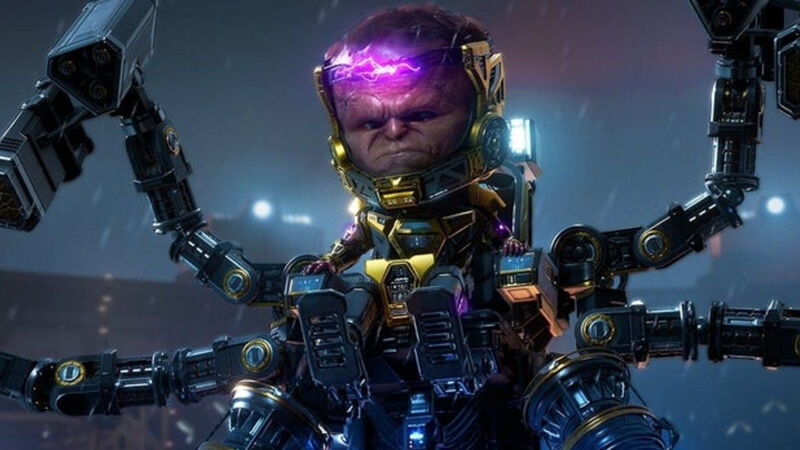 The Weird and Wonderful History of ‘Marvel’s Avengers’ M.O.D.O.K.

Marvel’s Avengers has just hit game consoles with someone decidedly different than the likes of Thanos or Loki as the big bad. Instead of a well-known, Marvel Cinematic Universe-established villain, Square Enix and Crystal Dynamics have decided to elevate M.O.D.O.K. as the primary adversary for the team and the leader of A.I.M. (Advanced Idea Mechanics).

That’s not bad for a Mental Organism Designed Only for Killing. M.O.D.O.K. has appeared in video games before, but almost always as a secondary boss character. Among Marvel villains, M.O.D.O.K.’s star is clearly on the rise, and he’s even going to headline his own animated series on Hulu. It’s funny to think that just a few decades ago, M.O.D.O.K. was killed off and seemingly destined to be forgotten. Now, it seems like M.O.D.O.K.’s inclusion in the live-action MCU is all but inevitable.

Who is M.O.D.O.K. to the uninitiated? Non-comic book readers only have the animated TV shows and video games to draw upon. But there’s more to M.O.D.O.K. than just his giant freakin’ head. And that’s what we’re here to explore.

The Man They Call George

Stan Lee and Jack Kirby introduced M.O.D.O.K. as a Captain America villain in Tales of Suspense #93-94. Although M.O.D.O.K. was seemingly killed in his first appearance, that didn’t stop Lee from bringing him back in the pages of Captain America’s first ongoing series. In Captain America #133, Lee and artist Gene Colan revealed the origin of M.O.D.O.K.. It turned out that he was just a lowly A.I.M. scientist who was unwillingly “volunteered” to become what was then known as the Mental Organism Designed Only for Computing. A.I.M. wanted M.O.D.O.K.’s greatly enhanced brainpower to help them create the Cosmic Cube, an object of near-infinite power. Instead, M.O.D.O.K. seized control of A.I.M. and embraced Killing over Computing.

Later stories established M.O.D.O.K.’s real name, George Tarleton, and his largely one-sided infatuation with fellow A.I.M. scientist, Monica Rappaccini. But in the early days, M.O.D.O.K. harbored a great deal of resentment for Cap over his physical perfection compared to the nightmare that Tarleton had become.

Fortunately, M.O.D.O.K. was too big to be tied down to any single hero’s rogues’ gallery. He went on to fight Iron Man before menacing Ms. Marvel (future Captain Marvel Carol Danvers) in several issues of her first series. In one of his early appearances in Incredible Hulk #167-169, M.O.D.O.K. turned Hulk’s longtime love, Betty Talbot (née Ross) into the Harpy, after correctly guessing that her prolonged exposure to Bruce Banner’s Gamma radiation made her an ideal candidate for mutation. The consequences of Betty’s transformation are still playing out today in Marvel’s Immortal Hulk series.

Years later, in Incredible Hulk #290, Bruce was in love with a scientist/S.H.I.E.L.D. agent named Dr. Kate Waynesboro. She was kidnapped by Hulk’s enemy, the Abomination, and delivered to a group of rogue A.I.M. operatives who wanted to overthrow M.O.D.O.K. and destroy him. That’s why they decided to turn Kate into the new M.O.D.O.K., or more specifically, Ms. M.O.D.O.K..

Hulk and M.O.D.O.K. were uneasy allies while attacking A.I.M. and attempting to rescue Kate. However, M.O.D.O.K. and Ms. M.O.D.O.K. were instantly smitten with each other, and M.O.D.O.K. declared his intention to make her his bride. But Kate retained enough of her humanity to express horror at M.O.D.O.K.’s lack of mercy and rejected him. She was subsequently restored to her human body while M.O.D.O.K. escaped on his own.

Eventually, A.I.M. made another female M.O.D.O.K. called M.O.D.A.M., but that’s a story for another time.

The Death and Rebirth of M.O.D.O.K.

M.O.D.O.K.’s war with A.I.M.’s rogue factions came to an abrupt end in Captain America #313, when the Serpent Society was hired to assassinate him. In M.O.D.O.K.’s weakened state, not even Captain America was able to save him. For nearly a decade, M.O.D.O.K. remained dead and out of the picture. That’s an eternity in the realm of comics, and it could have been the end of his story.

2007’s Super-Villain Team-Up: Modok’s 11 miniseries put M.O.D.O.K. in the lead as he assembled a motley crew of villains for a cosmic heist. Among his team were Armadillo, , Chameleon, Living Laser, Mentallo, Nightshade, Puma, Rocket Racer, Spot, the second Mandarin, and the Ultra-Adaptoid in disguise. This series also revisited M.O.D.O.K.’s origin, and his infatuation with Monica Rappaccini.

Even in the present, M.O.D.O.K. still had some romantic feelings for Monica, much to her annoyance. She had to reiterate that they never dated, and they simply had a one-night stand. Regardless, M.O.D.O.K. achieved his goal and perhaps came to value working in a group. Just a few years later, M.O.D.O.K. was working alongside the Leader, Red Ghost, Wizard, the Mad Thinker, and Egghead in the Intelligencia.

Amadeus Cho changed M.O.D.O.K.’s life forever in Incredible Hulk #610 when he restored his humanity and turned him back into George Tarleton. Currently, this change has not been reversed, and the original M.O.D.O.K. is now cured. In his place, a clone based on George’s brain became M.O.D.O.K. Superior in Hulk Vol. 2 #29. This M.O.D.O.K. has a very different personality than his predecessor, and a greater desire to find love.

Case in point, when M.O.D.O.K. defected to S.H.I.E.L.D. in Secret Avengers Vol. 3, he was openly infatuated with director Maria Hill. So much so that M.O.D.O.K. actually abandoned his plans to betray S.H.I.E.L.D., although his assistant, Snapper, did not. Regardless, S.H.I.E.L.D. let M.O.D.O.K. go, and he really came to believe that he had changed. M.O.D.O.K. formed a new group called Mercenary Organization Dedicated Only to Killing; which was dedicated to taking out villains. But M.O.D.O.K. Supreme ultimately slid back into villainy himself.

M.O.D.O.K. took another stab at being good in West Coast Avengers Vol. 3 #1-4. He gave himself a handsome new body and rechristened himself as the Bio-Robotic Organism Designed Overwhelmingly for Kissing. Unfortunately, B.R.O.D.O.K. didn’t handle rejection well, and he transformed the objects of his affection into giant monsters when they turned him down.

More recently, M.O.D.O.K. resurfaced in his old body during the 2020 Force Works miniseries. He was even briefly merged with the giant robot Ultimo as UltiM.O.D.O.K., before once again suffering defeat at the hands of the heroes.

M.O.D.O.K. made his animated debut in Iron Man (1994), as one of the Mandarin’s henchmen. This version of M.O.D.O.K. was noticeably shorter and smaller than his comic book counterpart, and he could even create an even smaller version of himself that he called External Life Form, or E.L.F. M.O.D.O.K. was also a recurring villain in the animated series Iron Man: Armored Adventures, which took some liberties with his origin and portrayal. In that series, M.O.D.O.K. was more computer-like than ever, and a very real threat to the young Iron Man. But within the much goofier world of The Super Hero Squad Show, M.O.D.O.K. was strictly comic relief, and he even briefly dated Ms. Marvel (Carol Danvers). Yes, really!

The Avengers: Earth’s Mightiest Heroes featured the first animated version of M.O.D.O.K. that seemed to capture the spirit of his comic book counterpart. But Wasp and Thor still couldn’t resist mocking his appearance when he showed up for the first time. He went on to appear in Ultimate Spider-Man, Avengers Assemble, and Guardians of the Galaxy, where he adopted a more sinister and calculating persona. However, M.O.D.O.K. was still very sensitive to any jokes about his physical appearance. Especially if they were about his gigantic head. That’s a characteristic that carried over to his portrayal in the most recent Spider-Man (2017) animated series. In that show, M.O.D.O.K. definitely enjoyed being evil, and he was a bit more talkative than in his previous appearances.

So far, M.O.D.O.K. hasn’t appeared in live-action, but there have been two close calls. Freeform’s New Warriors pilot, which wasn’t picked up to series, featured Keith David as a municipal worker named Ernest Vigman. New Warriors showrunner Kevin Biegel has confirmed that he intended to turn Ernest into M.O.D.O.K. if the series had gone forward. Similarly, Agents of S.H.I.E.L.D. co-showrunner Jed Whedon recently revealed that Marvel initially gave the series permission to use M.O.D.O.K. — with many speculating that was the original plan for Season 4 villain Anton Ivanov, AKA Superior — only to have that permission rescinded.

Regardless, Hulu is still going forward with a M.O.D.O.K. animated series executive produced and written by Patton Oswalt, who will also star in the show as M.O.D.O.K. himself. Wendi McLendon-Covey will co-star as Monica Rappaccini, one of M.O.D.O.K.’s rivals within A.I.M.. This series will be an adult-oriented comedy that makes up it’s own history for M.O.D.O.K.; which is why he’ll have a wife and kids. Ben Schwartz will voice M.O.D.O.K.’s son, Lou, in the series. Earlier this summer, Schwartz told Fandom that the show “covers what this evil villain would look like if he had a family to go home to and try to deal with on top of trying to become this villain, when his skill set is rather limited… Imagine this crazy brilliant person that is basically a floating head, what if he had to go back to his family and there were so marital problems, and there was a kid?”

In most of his video game appearances, M.O.D.O.K. has served as a secondary antagonist for the heroes to overcome. That includes his stints in the original Marvel: Ultimate Alliance and Marvel: Ultimate Alliance 3. However, M.O.D.O.K. was one of the surprising additions to Marvel vs. Capcom 3: Fate of Two Worlds and Ultimate Marvel vs. Capcom 3 as a playable character with his own ending.

Lego Marvel Super Heroes and Lego Marvel’s Avengers both feature M.O.D.O.K. as a playable character, and he’s also appeared in a handful of Marvel mobile games.

However, Square Enix’s new game, Marvel’s Avengers, looks to easily be M.O.D.O.K.’s most prominent gaming role to date. In a departure from comic book canon, George Tarleton will be depicted as the founder of A.I.M., rather than a mere technician. It’s also known that Tarleton harbors a hatred of superhumans, and he helped orchestrate the events of A-Day; which led the Avengers to disband.

Five years after A-Day, Tarleton has successfully pushed for all superheroes to be banned by law, In their place, Tarleton and A.I.M. have created robot armies to keep the peace and control the emerging population of Inhumans. With the game out now, players are just discovering how and why Tarleton becomes M.O.D.O.K. in the game. But he has appeared in full M.O.D.O.K. mode in the game’s trailers, which means a showdown with the Avengers is inevitable.

How will it all play out? We’ll see for ourselves as we navigate our way through Marvel’s Avengers!