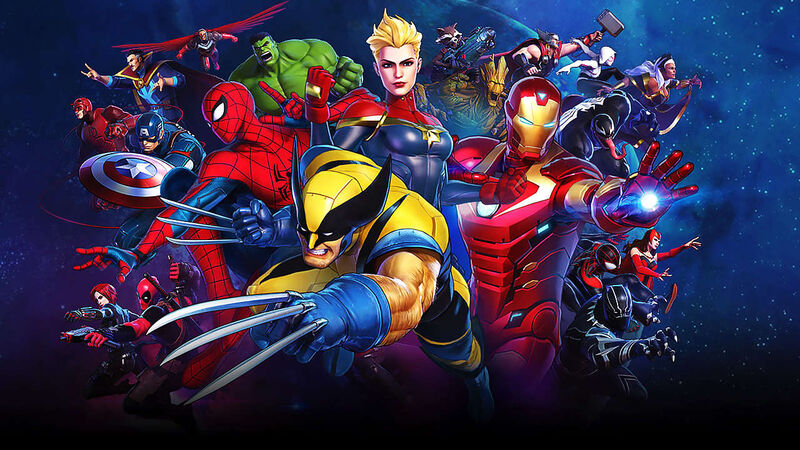 Marvel don’t have the greatest track record when it comes to licencing their assets for use in videogames. For every Marvel vs Capcom 2 there’s an X-Men: Destiny. For every Marvel Pinball (don’t scoff, play it, it’s wild) there’s a Thor: God of Thunder. Rumour has it that round the back of Professor Xavier’s School for Gifted Youngsters, there’s a hole in the ground. Xavier makes the crap X-Men (hello Cypher, howdy Skin, alreet Shatterstar) shovel all the godawful Marvel games made into it. Truth be told, it’s getting pretty full now.

Thankfully, it looks like the times are a changin’. Much like Rocksteady rehabilitated DC’s catalogue of characters with their Arkham series, 2018’s Spider-Man suggested that Marvel characters can exist and thrive within videogames; if they’re properly understood. If the characters are used correctly. If the game plays to their strengths. In the case of the aforementioned Spider-Man title, it excelled largely because it perfectly captured the freedom of Spidey swinging around New York City. Because it was funny. Developers Insomniac worked out the essence of what people liked about Spider-Man and they delivered it.

Which brings us to Marvel Ultimate Alliance 3: The Black Order, a Switch exclusive no less, developed by Koei Tecmo’s Team Ninja (Ninja Gaiden, Dead Or Alive) and published by Nintendo. The Black Order (as we’ll call it forthwith) – if you’re not already aware – is a new instalment in the action-RPG series that hasn’t been seen in almost ten years.

Despite being the third entry in an existing series, this threequel takes place in a world entirely separate to the previous two entries — and it’s not hard to see why. Such is the growth in popularity of Marvel within the last ten years, the events of the Marvel Extended Universe is cannon to most people’s understanding of these character’s stories, despite recent movies essentially repurposing the six-issue The Infinity Gauntlet arc that began in comics in 1991.

And, like the majority of Marvel Studios’ output, The Black Order excels because, like said movies, its creators so obviously understand the strengths innate to each of these characters. In fact, the key to really enjoying The Black Order, lies in understanding the characters you’re given the opportunity to play as. During combat, different characters have the ability to team up with other characters to generate super attacks.

In assembling your squad, which consists of four characters (with a fifth CPU character often added to the team depending on where you’re at in the story), you’re given perks for bringing together characters with shared allegiances. This might be ‘Web Warriors’, ‘New Avengers’, ‘Generations’, etc, etc.

Thanks to a roster very much geared towards Marvel nerds – we mean, this is a game in which you can play as Spider-Gwen! Or Ms. Marvel! Or Ghost Rider for hell’s sake! – who you choose to team together can result in fairly exhaustive possibilities. Venom, Groot, Thor and Hulk? That’s strong. Plenty of brawn. But maybe you need some stealth. Maybe you need to replace someone with Nightcrawler. Or what about a character who can fly? Put Star-Lord in there and you’ll get a bonus for bringing together the Guardians. But at the expense of who? There are decisions that matter in The Black Order. NB: Play with Venom as often as possible. Venom rules.

Team Ninja deserve plaudits for recognising that what players want from a game like this – on a system designed to actively encourage networked play – is the opportunity to create dream matchups. Finally, Iron-Fist and Hawkeye can team up somewhere that isn’t just the saddest corner of the Marvel superhero Christmas party. Yet while lumping together all of these disparate heroes could have resulted in a mess of the highest order, somehow, everything comes together surprisingly coherently. How? Because Team Ninja weaves together a ton of disparate heroes and villains, locations and fan-servicing quirks, within a story that is of genuine quality.

Here, the chaotic co-op brawling you’d expect from the series is broken up by some genuienly entertaining scene-setting animated shorts, the sort worthy of the most heroic of Saturday mornings.

Credit for the story can be attributed to one Marc Sumerak, whose previous credits include work on Avengers, Thor, Iron Man, Fantastic Four, Black Panther… In other words, a proper Marvel stalwart. Sumerak’s smart writing elevates The Black Order high above the frankly awful dross that has definied much of Marvel’s gaming output. Having a story written by somebody who understands – dare we say, cares about – these characters is a huge reason why The Black Order is such an enjoyable playthrough. But let’s not underestimate the gameplay either.

While it feels like a bit of a well worn cliche to say, this really is one of those titles that’s easy to play, but difficult to master. Yes, you can definitely make your way through the story by blindly bashing buttons. But if you really want to excel – and via a remarkable number of trials and training scenarios available to you, there is the opportunity to really excel here – you will want to master such variables as timing, distances, combos, and as outlined prior, the combination of personalities you take into combat.

If we’ve got a criticism of the action sequences, it’s that sometimes the camera can be a pain. Ditto, the CPUs and their often-illogical movements – this is a game that’s much better when played with real humans. But it says a lot that none of these factors really ruin what is a thoroughly entertaining game.

A last thought. This is a game which can be enjoyed by the entirety of the Marvel fanbase. It’s nerdy enough for the hardcore (did we mention that Elsa Bloodstone is a playable character!). It’s got every character those who’ve only ever seen the films would want to see. There’s real diversity within the chosen roster too. A team of Black Panther, Ms. Marvel, Luke Cage and Captain Marvel really is the future that liberals want. Perhaps most impressively, it’s a game which is pitched in that sweetest of spots; true universality. Children will enjoy this game. Adults will have a blast too. This, of course, is the Nintendo way, but it’s still worth applauding during this most divisive of times.

Somewhere round the back of Professor Xavier’s School for Gifted Youngsters, a bald man in a robust wheelchair is barking out orders at a host of increasingly miserable teenage mutants, demanding that the hole in the ground before them is filled in post-haste. But relax Professor! There won’t be any copies of this game added to the pile today…