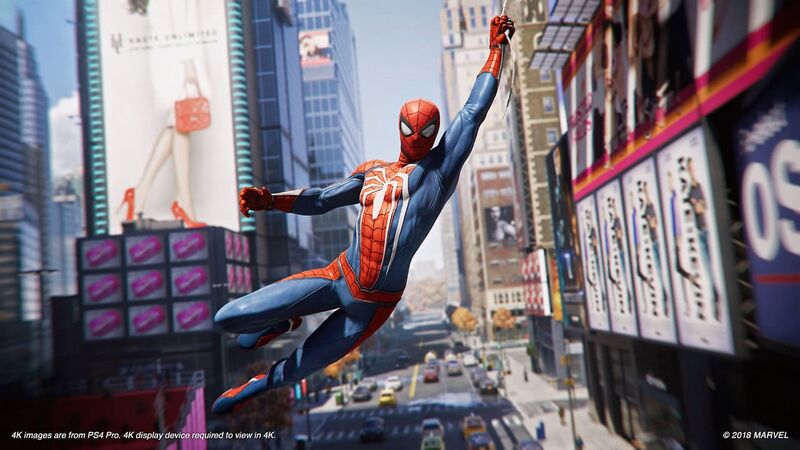 Let’s get this out of the way first — Marvel’s Spider-Man isn’t a perfect ride. Its combat can be clunky, the story is marred by uninspired dialogue and middling voice acting, and there are more than a few missions that are just downright dull. Yet, despite these failings, Marvel’s Spider-Man is still one of the most enjoyable gaming experiences we’ve had in recent memory.

It’s simply one of those games that feels utterly in tune with its source material. Somehow, developer Insomniac Games has managed to perfectly capture that campy, larger-than-life feel that made the ‘90s cartoon series such a hit, resulting in an adventure that feels almost like a digital distillation of pure, child-like joy.

So, what exactly makes Marvel’s Spider-Man so special, you ask? Well, it’s largely because Insomniac nails the one thing that really matters in a Spidey sim — the web-swinging.

A Swing and a Hit

Insomniac knows it too, because it shows it off right from the first second of play. The second you’re in control, you launch poor old Peter Parker off the roof of an old Manhattan building, swinging him dangerously close to a glistening skyscraper. With a quick squeeze of R2 instantly rewarding you with that iconic ‘THWIP’ sound, launching a web into the sky and swinging across the New York skyline feels as immediately intuitive as you’ve always imagined it to be.

It’s pure fantasy fulfilment — the gaming equivalent of running around the playground with a coat on your head while humming the Spider-Man theme. And thankfully, it’s an experience that never really gets old.

After a few hours, players will unlock the option to fast travel, where you’re able to zoom around the game’s decent-sized map via the good old-fashioned New York subway system. Yet as nice as having a fast travel option is, hopping on a train when you’re freaking Spider-Man feels pretty redundant, and more importantly, doing so means you’ll likely miss out on many of the game’s side missions.

Here, swinging about New York even feeds into how you approach missions and collectables — creating a borderline addictive sense of flow. Where trudging around game worlds littered with collectables and filler side missions can often feel exhausting, thanks to the joyous tools you have here to traverse Manhattan, what could have been dull fetch quests end up feeling less like a chore and more like a fun pit stop. It helps that there’s a huge variety of things to do in this bustling city too. Whether its collecting research samples for Oscorp, tracking Black Cat, diffusing bombs or er, chasing down lost pigeons, there’s always something going on that will catch your eye.

A Playstyle to Suit You

Being New York, this is especially true of crimes. We’d always happen on a mugging, a car chase or some other dramatic event while swinging leisurely over to a main story mission – and as Spidey, it would be remiss not to stop these thugs, wouldn’t it? Players are kept constantly moving, and when you spot that event or shiny collectible — it’s only ever a quick swing away. Thankfully, there’s a decent incentive to tackle side missions too – those juicy upgrade tokens.

As you zip about Manhattan, you are able to upgrade Spidey with a mix of classic RPG skill points (used in er, skill trees) and tokens, which net you more suits and mods for said suits. Cleverly, players who want to make the most out of their hero are forced to play multiple different types of missions, with some suits and suit mods requiring a combination of different token types (research, crime, base, landmark, etc). It keeps you motivated, turning what could have been a dull grind for components into a welcoming varied activity. Feeling a bit bored of beating on thugs? Then engage in a spot of landmark photography and get yourself a landmark token.

It all pays off too, with the same kind of flexibility afforded to tweaking your playstyle. Players are able to mix and match the super-powered suit abilities and unlock permanent combat and web-swinging kills, with these upgrades making both combat and traversal even more enjoyable as you level up. As the story progresses, these small tweaks and speed boosts really helped to keep swinging through the Big Apple feeling fresh, with players eventually rewarded with SSX-esque aerial tricks and other fun traversal-based upgrades.

It’s a shame, then, that combat bafflingly feels like the complete opposite of web-swinging here. Unsurprisingly, Insomniac has clearly taken notes from RockSteady’s genre-defining Arkham combat system. As you leap into battle, you will send Spidey bouncing off foe-to-foe, laying down a mix of punches and web attacks and until that signature-style Arkham THUD tells you that your target is down for the count. Yet, where web-swinging feels immediately intuitive, combat feels clumsy — and it takes no prisoners.

Right from the get-go, we found ourselves getting slapped around by grinning henchmen, with an early boss that we won’t spoil, killing us more times than we’d care to admit. The main problem here is the lack of a lock-on system. Because of Spidey’s acrobatic nature, it certainly makes sense to have a fluid camera in theory, but in practice, until you’re fully upgraded — those lack of abilities at the start really makes combat feel like a struggle.

Outside of traversal and combat, players will find themselves doing fetch quests, engaging in iffy stealth combat and even stepping outside of the Spider suit entirely. The non-Spider-Man missions are a bit of a mixed bag, with some  Mary Jane stealth sections feeling genuinely tense and others coming across as a bit half-hearted. You’ll play as Peter Parker fairly regularly too, where you’ll be forced to engage in some incredibly dull circuit-board-based, puzzle-piece style mini-games. It mixes things up a bit, tapping into the Peter/Spidey duality that’s always been a key part of the comics, with feeling vulnerable serving up a nice contrast to the rest of the game’s super-powered antics.

Storywise, it’s nothing ground-breaking. As you’d expect from a Spider-Man game, players can expect to face off against a ton of classic supervillains. While you’ve most likely already seen most of them in trailers, after hearing a few key names early on, anyone with a passing interest in Spider-Man will know who the ‘real’ villains are after a few hours in. The story isn’t entirely without its merits though, with some cool set pieces setting you up for some cool-looking QTEs, but overall it’s a tale that feels overly predictable, thanks to a narrative that follows too many universally known villains.

Still, while the yarn that Insomniac’s Spidey spins is certainly no Last Of Us, it’s easy to forgive that when the Manhattan its set in such a technical marvel. Quite simply, Marvel’s Spider-Man is gorgeous. When playing on the PS4 Pro, everything from glistening skyscrapers to the luscious-looking Central Park brings this idyllic, sun-soaked New York lovingly to life thanks to some crisp 4K textures and that sweet, sweet HDR.

But what’s REALLY impressive, is that this game only runs at 30 frames per second. For a game that’s all about speed, this should be a deal-breaker, yet, thanks to some clever, DOOM Switch-style motion blur, everything feels like it’s running at breakneck speed.

It even looks great in a darker setting too. After story events which we won’t spoil, things take a turn for the bleak for poor old Spidey and Manhattan’s skyline follows suit. For a few hours, the Big Apple’s once sunny streets are transformed into a dark, Arkham City-esque, criminal-controlled nightmare. This sees Spidey going into districts of the city and clearing wave-upon-wave of baddies. As you’re fairly powered up by this point, the combat finally hits its stride, allowing you to keep combos going and going as you zip from goon to armoured goon, pirouetting and backflipping off rooftops and swinging your way out of gunfire and launching various web attacks before swinging into brutal dropkicks.

Is Marvel’s Spider-Man Any Good?

Marvel’s Spider-Man is an undeniably flawed game. Its voice acting elicits more cringes than smiles, it regularly sends you on bland filler missions, and in a post-RockSteady world, its approach to stealth feels positively PS2-esque. Yet, despite all of this –it’s a game we can’t bring ourselves to put down.

Thanks to its masterful sense of flow, knowing nods to the world of Marvel and refreshing sense of mission variety, there was rarely a moment in its 20-plus hour playtime where we didn’t have a sh*t-eating grin plastered across our faces. Quite simply, it’s consistently a joy to play. And while it may not push interactive entertainment into a bold new realm, it’s a superhero sim that fulfills your every web-slinging fantasy. And really, that’s all we ever wanted from a Spider-Man game.