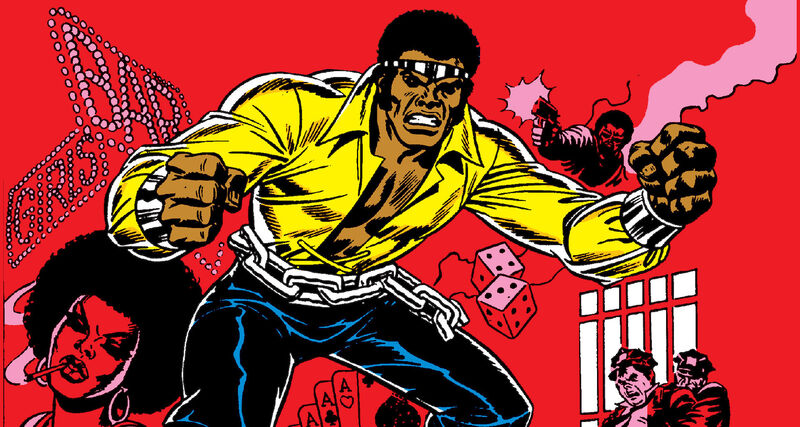 Your favorite superheroes are over 50 years old! Before they got dark and gritty, they did some goofy things. Welcome to Midlife Crisis on Infinite Earths where we look back at the less than illustrious adventures of some of the biggest heroes in comics. In this edition, we are taking a look at the Blaxploitation roots of Luke Cage, AKA Power Man!

Product of a Different Time

Blaxploitation films were incredibly popular when Marvel created Luke Cage. Depending on your point of view, those films were either reinforcing black stereotypes, or they were about empowerment. Since I’m a nerdy white guy, I’m not even going to attempt to make an opinion on that. Speaking of, do you know who created Luke Cage? A nerdy white guy! That nerd was Archie Goodwin, who was a mainstay at Marvel in the late ’60s and early ’70s. Goodwin was one of the creative forces trying to find new ways to entice readers, during this time when traditional comic books were in decline.

Put into perspective: Poor urban neighborhoods and feature a mostly African-American cast was the typical setting for Blaxploitation films. Although Goodwin lived in New York at the time, his perspective of these types of tales was still filtered through the lens of a Caucasian from Kansas City.

Goodwin was likely aware of the poor quality of life in Harlem at the time. But for him to look at that, see what constituted as popular films at the time, and say “Hey, I know the struggle is real! Here’s some comics” is some real old-school white privilege. Going back and reading these old Luke Cage comic books and you think, damn, you aren’t qualified to write these kinds of stories, no matter how well intended they were supposed to be.

Framed for a crime he didn’t commit; Carl Lucas ended up in Seagate Prison. Sick of the racist guards, Lucas agreed to undergo an experiment that could grant him early parole. However, a racist guard named Albert Rackham tried to interfere with the operation to kill Lucas. Instead, it endowed Carl with bulletproof skin and enhanced strength. Seeing a no-win situation, Lucas broke out of prison and fled back to his native New York.

Establishing the identity of Luke Cage, Lucas set himself up as a “Hero for Hire,” helping people out if the price was right. He also made it his mission to try and clear his name. Unfortunately for Luke, when his former friend — Willis Stryker, AKA Diamondback — died in battle against Cage, seemingly destroying any chance Luke had to clear his name.

Still, a wanted fugitive, Luke Cage continued to try and operate his business, while keeping his true identity a secret.

I’ve gone over some of the villains Luke Cage faced in a previous article, but that was just the tip of the iceberg. Luke Cage’s adventures in the 1970s were rife with characters that were typical for the era.

His first foe, after Diamondback, was Gideon Mace. Mace was a disgruntled soldier and was against the United States after his dishonorable discharge from the military during Vietnam. Luke Cage regularly clashed with him, stopping schemes that usually involved blowing up a lot of innocent people.

Gideon’s character was a commentary on the Vietnam War, but what were they trying to convey? Were they commentating on the atrocities committed during the war? Were they providing a voice for the many veterans left broken from it? Any valid commentary was dashed when they set the guy up as a terrorist. I don’t think it does well to set up Luke Cage as a sympathetic character if the only reason why he bothered stopping Mace was to make money.

Another villain was Black Mariah. She used an old ambulance to rob injured victims of their valuables and would regularly then leave them for dead. Incidentally, he did this job pro bono but was reamed out for capitalizing on a tragedy. If anything, the writers were figuring out that a “Hero for Hire” in a crime infested neighborhood couldn’t be seen in a positive light.

Luke Cage started calling himself Power Man in issue #17 of his series. Fun fact: Luke Cage’s name was derived from the phrase “Black Power.” The writer of the story didn’t have any concept as to what “Black Power” really meant. It certainly didn’t mean an African-American in a tiara.

Other career highlights from this era include Luke stuffing money into J. Jonah Jameson’s mouth, causing a civil war in Latveria to get paid, and forcing the Defenders to put him on a retainer for his services.

The Luke Cage of old had less to do with empowering African-Americans and more to do with good old fashioned (white) American capitalism.

In the late ’70s, Blaxploitation was no longer in vogue, leaving writers at an impasse over what to do with Power Man. It just so happened that martial arts were also becoming less popular, and the creative team behind Iron Fist had the same problem. Marvel’s solution was to merge the two titles together and so Power Man and Iron Fist: Heroes for Hire was born.

The series brought the two characters into more traditional superhero fare throughout the 1980s. However, the stories mostly focus either on their joint business venture or Iron Fist’s mysterious connection to K’un-Lun.

Luke Cage was mostly around to add that African-American vibe. One of most notorious Luke Cage stories was when he crashed into the middle of an issue of Vision and the Scarlet Witch just to tell them it was the first ever Martin Luther King Day.

Then there’s the moment during the forgettable Secret Wars II event where Luke tries to teach the Beyonder about money and being black.

Cage came back to basics in the ’90s as a hero for hire, but his new “extreme” ‘90’s makeover was a flop. At the end of the decade, he was featured in a new Heroes for Hire series where he betrayed his friends to the Master.

Marvel revived Luke Cage under the Max imprint, and Brian Azzarello was the guy they picked for the job. Best known for his work on Vertigo’s 100 Bullets, Azzarello had the ability to write realistic characters from all walks of life. Unfortunately, this didn’t translate very well when it came to Luke Cage. The character became a racial stereotype again. He sounded more like a white person pretending to be a gangster rapper than anything else.

Up until this point, nobody treated Luke Cage as anything more than a reflection of what they thought African-American culture was at the time the story was written. That was until Brian Michael Bendis got his clutches on the character.

Around the time of Azzarello’s forgettable Cage run, Bendis also had Cage appear in the pages of Alias. Through his interactions with Jessica Jones, Cage’s character finally shook off the stereotypical trapping that made him a joke for the past 40 years. He turned Cage into a real character, with adult responsibilities. Lastly, and I think this what made all the difference in the world, Bendis wrote Cage as an interesting character that happens to be black, instead of a character who should be interesting because he is black.

That made all the difference in the world.