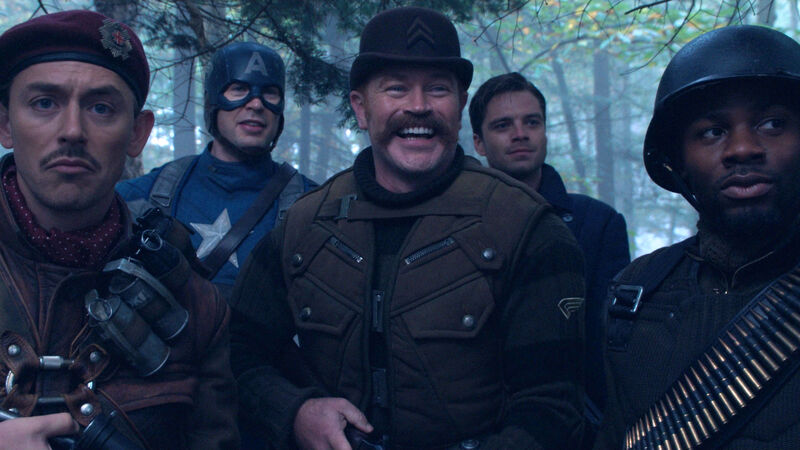 Part of the fun of a shared fictional setting, like the massive Marvel Universe, comes from the idea that not only could any big hero or bad guys walk on at any time, but they also share a supporting cast of both superpowered and everyday regular folk just going through their life. So if the on-screen Captain America needs to fight a mini boss or be stymied by a mid-level government bureaucrat, instead of inventing an anonymous nobody, a writer can pull up a fully drawn character with decades of (sometimes convoluted) supporting comic book lore fleshing them out.

Read on to find out the surprising history of the MCU’s supporting players.

On screen: Monica Rambeau in Captain Marvel (Watch now on Disney+) is the young daughter of Carol Danvers’ best friend Maria Rambeau. Monica helps Captain Marvel change the colors of her Starforce uniform from teal and black to the familiar blue, red, and gold (inspired by Maria’s retro U.S. Air Force t-shirt). She’s briefly held hostage by the Skrull impostors Talos and Norex, but by the end of the movie she’s friendly with the Skrulls and asks if they can stay on Earth.

In the comics: Monica Rambeau was Captain Marvel long before Carol Danvers (who originally went by the superhero alias “Ms. Marvel”) took up the moniker. Monica first appeared as Captain Marvel in 1982 in The Amazing Spider-Man Annual #16, wearing a black and white costume with an eight-pointed black star on the chest. She has similar energy-blasting powers as the MCU’s Carol Danvers, but Monica can also transform into pure energy and fly faster than the speed of light. Monica soon joined the Avengers, eventually becoming the leader of the team. In the mid 2000s, she was a member of the sadly short-lived Nextwave. With Carol Danvers currently using the name Captain Marvel in the comic books, Monica now goes by “Spectrum.”

On screen: Timothy “Dum Dum” Dugan in Captain America: The First Avenger (Watch now on Disney+) is part of the small team of expert soldiers called the Howling Commandos who accompany Steve Rogers and Bucky Barnes on their missions during against HYDRA and Nazi Germany during World War II. Following Steve Rogers’ apparent death, took charge of the Howling Commandos (as we see in the spin-off TV series Agent Carter and Agents of SHIELD) and operated covertly behind the Iron Curtain during the Cold War.

In the comics: Dum Dum Dugan was a Stan Lee and Jack Kirby creation, first appearing in Sgt. Fury and His Howling Commandos #1 from 1963. He was a member of the fictional World War II special operations unit alongside Nick Fury, long before Fury was the director of S.H.I.E.L.D. Before joining the Army, Dugan had performed as a circus strongman in Boston. He continued working with Fury, eventually rising to become the deputy director of S.H.I.E.L.D. During a 2014 storyline, however, Dugan discovers that he actually died on a mission back in 1966, and since that time his preserved body has been transmitting his consciousness to a robot copy of himself called a “life model decoy.” Devastated by the truth, Dugan shoots himself in the head, in front of Fury. He was recently brought back to life again as a decoy robot, however, to lead a new team of Howling Commandos.

On screen: Eugene “Flash” Thompson is a classmate of Peter Parker and a persistent antagonist. While not exactly a bully, Flash won’t pass up on any chance to ridicule Peter both at school and at a party at the house of Peter’s crush, Liz Toomes. While on a school trip to Europe in Far From Home, Spider-Man’s class is continually hounded by Mysterio. Flash says that Spider-Man is his favorite super hero, not knowing that Peter Parker is Spider-Man.

In the comics: Flash Thompson has always been a nuisance to Peter Parker, all the way back to his first appearance (along with Spider-Man) in Amazing Fantasy #15. Flash is frequently attacked by Spider-Man’s enemies, including Doctor Doom, Green Goblin, and Hobgoblin, and he eventually becomes close enough friends with Peter Parker that he asks Peter to be the best man at his wedding. Flash dates the Black Cat, joins the Army, and loses his legs in Iraq. Looking for a cure that will let him walk again, he joins with a type of Venom-like symbiote wth healing powers and becomes Anti-Venom.

On screen: Anne Marie Hoag is part of the U.S. Department of Damage Control, a government agency that cleans up the aftermath of super-powered fights. Hoag personally shuts down Adrian Toomes’ (a.k.a. the Vulture) salvage operation working to clear out Chitauri wreckage after the Battle of New York from The Avengers, which leads Toomes to turn his company into a criminal enterprise.

On the page: Anne Marie Hoag is the founder of Damage Control, which was originally a private entity owned jointly by both Tony Stark and Wilson Fisk (a.k.a. The Kingpin). The organization’s role is the same — to clean up after superhero-related disasters. Typically, Damage Control is portrayed as everyday office workers who get sucked into the fringes of Marvel’s big superhero events. The organization has even been featured in several series of its own, most recently following World War Hulk. Hoag first appeared in Marvel Comics Presents #19 in 1989.

On screen: Taneleer Tivan, The Collector first appears in a post-credits scene in Thor: The Dark World (Watch now on Disney+), when Thor’s compatriots Sif and Volstagg bring him the Aether — the Reality Stone — for safe keeping in his personal museum on Knowhere. In Guardians of the Galaxy, The Collector hires Gamora to betray Thanos and bring him the Orb that Peter Quill had recovered from the planet Morag. The Collector explains that the Orb actually holds the Power Stone, but they take the stone to the Nova Corps, ultimately using it to defeat Ronan the Accuser. In Avengers: Infinity War, we find out that the Collector’s Museum wasn’t a safe place to keep the Reality Stone after all, because the last we see of the Collector is an illusion created by Thanos after he’s already acquired the stone.

In the comics: The Collector’s first appearance was in 1966 in The Avengers #28. He is one of the oldest beings in the universe, dedicated to preserving certain aspects of creation from the universe’s eventual destruction. In practice, however, the Collector is usually trying to nab either superbeings or one of the many cosmically powerful weapons from the Marvel Comics universe to keep in his museum. His perennial kidnapping plots have put him in contact with a wide range of Marvel heroes through the decades, including the Avengers, the Fantastic Four, the Hulk, Thor, the Punisher, and Wolverine.

Guardians of the Galaxy Vol. 2

On screen: Stakar Ogord leads a separate Ravager crew from Yondu. Stakar had originally saved Yondu from a life of slavery, but years later discovered that Yondu was violating the “Ravager Code” by delivering the sentient planet Ego’s children to him. After Yondu’s heroic death to save Peter Quill from Ego at the end of Guardians of the Galaxy Vol. 2, (Watch now on Disney+) Stakar forgives Yondu and posthumously reinstates him in the Ravagers.

In the comics: Stakar Ogord is known as Starhawk, and his involvement with the Guardians of the Galaxy dates back to their earliest years. He first appeared in 1975 in the pages of Defenders #27. In comics continuity, he’s the son of Ayesha, who was portrayed as a golden high priestess in Guardians of the Galaxy Vol. 2. Starhawk is born more than 1,000 years in the future (when the rest of the original Guardians first team up), but on occasion he has traveled back in time to join up with heroes in the contemporary Marvel comics universe. His superpowers are impressive, including energy manipulation, invulnerability, and the ability to sense the future.

On screen: Beta Ray Bill makes only the briefest of appearances in Thor:Ragnarok. He’s one of the faces in the “Mount Rushmore” atop the Grandmaster’s Palace on Sakaar alongside the Hulk (whose bust is still under construction when Valkyrie hauls in Thor), Ares, Bi-Beast, and Man-Thing. In that regard, he’s more of an Easter egg than a character, but it establishes that Beta Ray Bill as someone who had competed in the Grandmaster’s Contest of Champions and won. That means at one point he did — and possibly still does — exist in the MCU.

In the comics: Beta Ray Bill first appeared in The Mighty Thor #337 in 1983. He was an cybernetic champion built by the alien race called the Korbinites. After their galaxy was destroyed, they fled in a fleet of starships, with Beta Ray Bill as their guardian in the sentient vessel Skuttlebutt . (The Asgardians in Thor: Ragnarok flee in a visually similar ship called the Statesman. For a time, Beta Ray Bill effectively was Thor. After beating Thor in a fight set up by Odin, Beta Ray Bill was judged worthy enough to wield Mjolnir. Odin then rewards Beta Ray Bill with the battleaxe Stormbreaker, designed to have the powers of Thor’s weapon. Beta Ray Bill is currently a member of the Guardians of the Galaxy.

On screen: Georges Batroc leads the pirates who hijack the covert S.H.I.E.L.D. spy ship Lemurian Star at the beginning of Captain America: The Winter Soldier (Watch now on Disney+). Batroc (who was played by three-time Ultimate Fighting champion Georges St-Pierre), challenges Captain America to fight hand-to-hand without using his shield. Cap wins the fight, but Batroc escapes by throwing a grenade. Batroc is captured off-screen, and the last Steve Rogers sees of him is on a live feed of his interrogation.

In the comics: Georges Batroc goes by the not-fooling-anyone alias of “Batroc the Leaper.” In addition to possessing a high level of kickboxing skills, his primary ability is being able to jump farther than the average man — as much as 10 feet, according to the Official Handbook of the Marvel Universe. (The current long jump world record, in comparison, is 29 feet 4 1/4 inches.) Originally wearing a purple and orange costume, Batroc is sometimes presented as a comic figure, other times he’s a more serious bad guy. He has led several different variations of a supervillain team called Batroc’s Brigade. Batroc the Leaper first squared off against Captain America in Tales of Suspense #75 from March 1966.