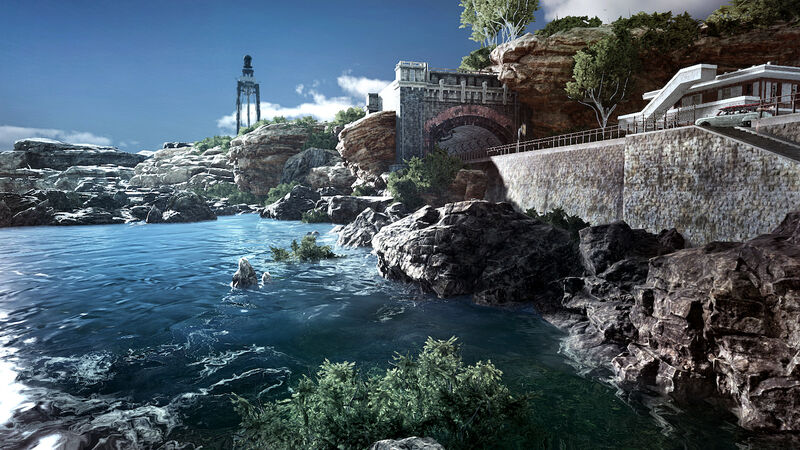 The story of Monster of the Deep follows your player-created avatar on a quest to defeat some hideous monsters lurking in the waters of Eos’ lakes and pools. At the start of the game, you set off for a nice fishing jaunt, but end up wrapped into a massive hunt to bring these threatening daemon-fish down. Along the way you meet some familiar faces from the main game — like mechanic Cindy and our best boy Prince Noctis, who somehow found time to fish while the world crumbles around him.

The game itself is organized into several hubs with story missions attached. Each area you visit allows you to move around the edge of the water, using your sonar to locate places with the highest fish concentration. Using the Dualshock controller or two PlayStation Move controllers, you’ll pull back your VR fishing rod, cast it, and then reel it back once a fish bites. With each fish you catch, you get closer to unleashing the boss of the area: a monstrous, sometimes frightening fish. For these latter beasties, you switch from fishing rod to crossbow as you attempt to take them out.

The results of the actual fishing mechanics vary. Once you’ve mastered them, they work beautifully. But until you get the hang of casting your rod, it can be challenging. Sometimes a wrist flick would send my lure flying off somewhere, while a stronger motion would cause it to barely go a few feet. Once you master these controls, Monster of the Deep becomes a cathartic and peaceful experience — until the daemon-fish come, anyway.

Monster of the Deep was made for a very specific kind of person: the person who is fully invested in the Final Fantasy XV universe. It’s a fun addition of side-story content and adds to the larger world-building of Eos. The developers have always seemed to take pride in the creation and evolving taxonomy of its creatures, and Monster of the Deep is the best example of such. Some of these fish are just fish; others are the stuff of bad dreams. And given their propensity to leap into your face — what would a VR game be without a few jump scares — I found myself screaming and trying to cover my eyes more than once.

A Challenge to Tackle

The more you play, the more gear you can unlock, such as new lures and goodies to help improve your odds while fishing. But in the beginning, fishing can be a pain. The success rate of catching is very low — in fact, it’s as challenging and requires as much patience as the fishing minigame in the main Final Fantasy XV.

For a game based solely around this fishing game, this artificial difficulty ramp doesn’t cut it; it makes the experience a bit tedious and at times it can feel like you’re getting nowhere. Additionally, there is very little feedback about how fish interact with your lure: either they bite or they don’t. So if you’re okay with waiting for long periods of time, then you’ll be fine with the down time in Monster of the Deep.

There are a few other technical hiccups — this is VR game, after all. Most notably, the load times are painfully long, and sometimes the teleportation-style locomotion system doesn’t quite get you where you need to go. (Thankfully, this point-and-click movement makes it easier to play for those prone to motion sickness, like myself. I encountered very little discomfort playing Monster of the Deep.) Sometimes objects and your own fishing rod clip into things, but if you recalibrate your gear, ,these issues are alleviated.

Once you complete the story, you can head back into the world in Free Mode — where you can play freely — or Hunter Mode, where you can take on additional fish hunts for rewards. Tourney Mode also adds a bit of competition to the mix with some timed challenges.

As another piece of the Final Fantasy XV world, I enjoyed my time with Monster of the Deep. If you took the time to get into the rhythm of the fishing minigame, then its VR counterpart adds another layer of challenge to the ordeal. It’s fun to interact with this world in a new way, even if some of the fish are nightmare fuel, and even if the overall experience is simplistic. But if VR and/or Final Fantasy aren’t your thing, you may want to sit this one out.