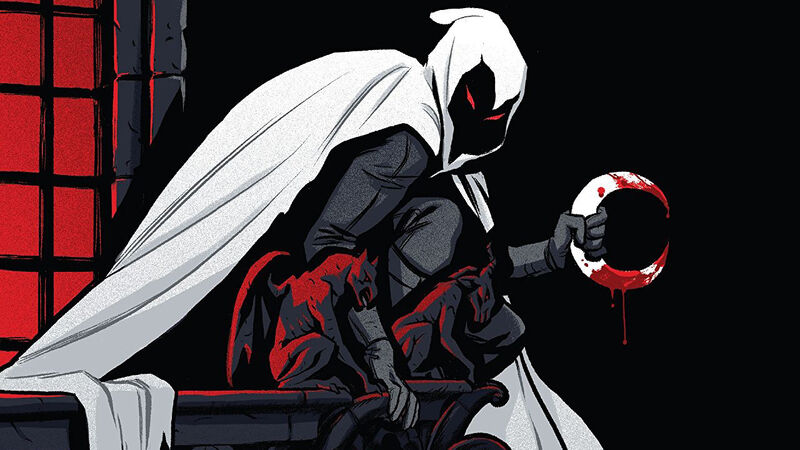 This year’s D23 Expo convention marked the announcement of three new series to the Marvel Cinematic Universe section of the new Disney+ streaming service, as we learned that Ms. Marvel, She-Hulk, and Moon Knight were all in the works.

With these additions, the total number of live-action Marvel Studios series coming to Disney+ has risen to seven, including The Falcon and the Winter Soldier, Loki, WandaVision, and Hawkeye (plus the animated series, What If…?). However, among these, Moon Knight stands out as the only one without any apparent ties to any previous MCU hero, as even Ms. Marvel will likely include the title character’s hero-worship of Captain Marvel in some capacity. He is in an interesting spot because his story will be told from the ground up.

Just who is Moon Knight? The character first appeared in 1975’s Werewolf by Night #32, and on the surface, his wealth, equipment, and costume may seem like Marvel’s way of having their version of a certain Caped Crusader. And yes, some of their methods and outward traits are very similar. However, the motivation driving Moon Knight to do what he does is what makes him a unique character. Let’s take a look at why Moon Knight is much more than just “Marvel’s Batman.”

Marc Spector grew up in a Jewish family as the son of a rabbi. As a young man, he served in the Marines and later became a mercenary. As first recounted in 1980’s Moon Knight #1, it was during his mercenary days that Marc and his partner Jean-Paul “Frenchie” Duchamp took a job with Raul Bushman to help recover an ancient tomb in Egypt. Bushman would kill Peter Alraune, the archaeologist helping with the recovery, to claim it for himself.

That wasn’t all though, as Bushman also murdered Spector, who tried to stop him. In the aftermath of Marc’s death, Duchamp and Peter’s daughter, Marlene, placed his body in front of the idol of Khonshu, the Moon God. Khonshu himself then made a deal with Marc’s spirit that would resurrect him: he would save his life if Marc served him as his avatar.

Upon returning to New York, Spector uses the fortune he amassed as a mercenary to set up as a crimefighter. He designed his costume and equipment, taking on the name Moon Knight. He also set up two more identities for himself: Steven Grant, a financier who would make sure Moon Knight had cash flow coming in at all times, and Jake Lockley, a cab driver who acted as a street informant. These new identities would come into play throughout Moon Knight’s career, but not in the way fans likely expected.

During most of his tenure as “The Fist of Khonshu,” Moon Knight mainly acted as a lone hero. He would, however, fight as an Avenger on two different occasions. After helping the Avengers’ west coast division on a time-travel adventure, he would join them for a brief period beginning in West Coast Avengers #23. Years later, following the defeat of Norman Osborn during the Siege, Moon Knight would become part of Steve Rogers’ Secret Avengers in Secret Avengers #1.

The truth of Moon Knight’s mental state is a subject of contention. For years, many thought Spector had Dissociative Identity Disorder (DID) prior to his encounter with Khonushu, which led to the four distinct personalities (Spector, Moon Knight, Grant, and Lockley) Spector created when he first took on the role of Moon Knight truly becoming their own separate “entities” within his mind. However, it’s also been said that it was Khonshu who directly changed Spector. Khonshu has four parts of his spirit — Pathfinder, Embracer, Defender, and Watcher — and Spector’s mind took these four parts and gave each a distinct personality.

Years later, while living in Los Angeles, Moon Knight would hallucinate versions of Captain America, Wolverine, and Spider-Man, even wearing their costumes and assuming their personalities at points. The incident would have many  to believe the trauma caused by Khonshu over the years finally broke Spector, causing him to develop DID after all in 2011’s Moon Knight #1.

Whether the source of Marc Spector’s mental struggles were always within him or caused by Khonshu remains open to interpretation.

A Penchant for Violence

Regardless of what personality is currently taking over the mind of Marc Spector, Moon Knight has more in common with the Punisher than he does Captain America. He is not afraid to kill to win, and on occasion can take it even further. During his final battle with Bushman as depicted in 2006’s Moon Knight #2, Moon Knight not only killed his enemy but used one of his crescent darts to carve off Bushman’s face. Even though he’s on the side of good, he’s not one to be trifled with.

For the most part, Moon Knight does not have superpowers. His time in the military granted him expertise in martial arts, detective work, piloting, and weapons mastery. He also has a high pain threshold, and his different personalities have affected his mind in a way that makes him resistant to telepathic attacks.

His costume is Adamantium laced, so good luck getting through it (unless you’re Wolverine.) His mode of transportation is his helicopter (or “Mooncopter”) which resembles a crescent moon, while his favorite weapons are his crescent darts. Much like a Batarang, they take the shape of the thrower’s inspiration. Frenchie has sometimes assisted Moon Knight in his adventures, including flying the Mooncopter for him.

At specific points throughout his career, Kohnshu granted Moon Knight superpowers, and when under a full moon, he could lift approximately two tons.

Stepping into the MCU

Marvel Studios has an exciting opportunity with Moon Knight. Someone who lives with four distinct personalities in his head at one time can lead to some very different adventures. With casting speculation already started, the question then becomes, “Do you hire one actor, or four?” – one to play Marc Spector, the others to depict the other personas that take him over. Hiring four actors gives the advantage of seeing each personality given a specific, unique voice. However, more likely is going the route of Orphan Black and the amazing Tatiana Maslany, which reminded us that, if done well, one actor can pull off multiple  portrayals on one show and make it seamless. We had the Clone Club. Now we’d have “The Lunar Cycle”? We’ll workshop it.

We can’t wait to see how he tries when Moon Knight premieres on Disney+.