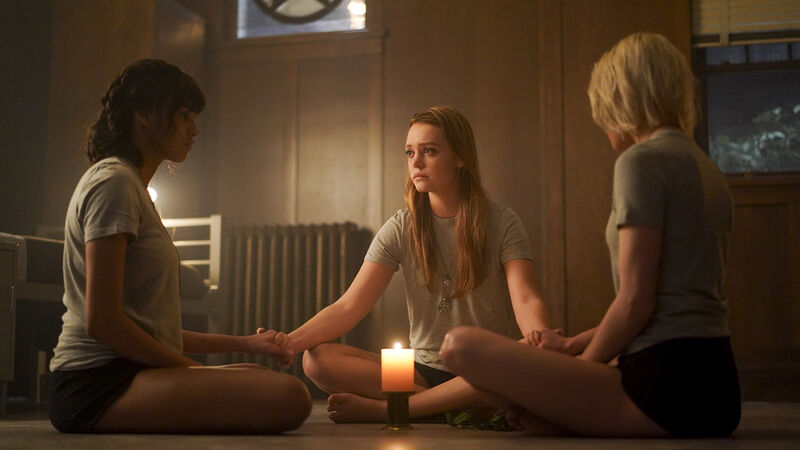 Imagine an America where women weren’t accused of witchcraft and burned alive back in late 17th Century Salem, Massachusetts. What if, instead, humans made a pact with witches, sparing their lives in exchange for the spellcasters joining the army and fighting the British?

This is the alternate world depicted in Freeform’s new fiendish fantasy series, Motherland: Fort Salem. In this magic-filled timeline, women who come from witch bloodlines must join the army at the age of eighteen, and then serve for life, protecting the U.S. from all enemies — including a sinister squad of witches called The Spree.

Fandom spoke to the creator of Motherland: Fort Salem, Eliot Laurence, about the dark and intricate world of war witches, Salem-bound servitude, and why he considers the series to be “fantasy through a sci-fi lens.”

While Motherland: Fort Salem isn’t based on a known book series, it was originally intended to be one. Laurence had the idea nine years ago, and wrote out an entire history of this alternate world, in detail, along with the Fort Salem saga itself, with the intention of writing a novel (or two, or three). When the decision was made to go the TV route instead, he then had to rework it all.

The Salem Witch Trials still stand as the show’s jumping-off point, though.

“A pact was made and that’s where the show’s timeline splits off from our timeline,” Laurence explains. “Before that, it’s mostly the same but after that, America became a very different country. The Revolutionary War was fought in an afternoon. Emancipation happened a lot earlier.”

The series centers on three young witches — Raelle, Abigail, and Tally — as they enter basic training in combat magic.

“Raelle (Taylor Hickson) has a chip on her shoulder,” Laurence shares. “And she’s from a part of witch society that’s a little unusual, in that her mom, a military witch, married outside the military. She married a civilian man. Which is a big ‘no-no’ for this particular military, who’s interested in creating and maintaining these powerful bloodlines and uniting them to create super-soldiers. So marrying outside of this pocket matriarchy is practically forbidden. And Raelle’s mom was punished for it. Her pension was affected because of it. The army kept her deployed pretty much constantly, and Raelle feels like they kind of worked her to death.

“Since her mom died about a year before what we see in the pilot, Raelle’s still carrying that raw grief inside her. And she has a huge chip on her shoulder about witchhood in general. She’s also from a weird part of the country, in terms of witch-hood. She lives in The Cession, which is a kind of massive unified Native American reservation that borders the Mississippi. She grew up as an outsider and she carries this edge with her.”

Of Abigail, Laurence says, “Abigail (Ashley Nicole Williams) is a ‘Bellweather’ and a lot comes with that name. She’s from one of the first families of American military witchhood and she grew up in Annapolis and New York City and is very privileged and powerful. With that comes very high expectations. A lot of Abigail’s journey as a character is finding out who she really is outside of all this Bellweather nonsense. She shrugs a lot of it off while also simultaneously finding that she does possess a streak of leadership that’s very strong. But she wants to find it her own way.”

And so to Tally.

“I think of Tally (Jessica Sutton) as a walking exclamation point,” Laurence beams. “She’s too excited about everything. And she’s from another kind of weird circumstance in American witchery, in that she was actually granted a dispensation from service. Because her mom, who was also granted a dispensation, lost four or five sisters, and it was deemed that the matriline needed to be protected and could skip a few rounds of conscription. But Tally, being so idealistic and also naive in a beautiful way, wants to do something meaningful with her life and to find a purpose.”

How Magic and Science Blend

To practice magic on Motherland: Fort Salem, the witches must train their voices. Spells are cast by emitting very precise sounds, using their voices to hit a fine frequency.

“I really wanted to create something new, and portray a new way into magic and witchcraft,” Laurence says. “I think of this series as fantasy through a sci-fi lens. It’s about these frequencies of sound rather than Latin incantations you’d find in a spellbook. It’s about hitting these very scientifically specific frequencies that control the physical world. I’m trying to make the magic feel grounded and rigorous and not too easy. And for there also to be a trail of conceptual breadcrumbs as to how it happens. For example, witches are born with an extra set of vocal cords so they can hit these sounds that others can’t.”

Witches in training are painfully pushed to the limit so that they can combat The Spree, who are a terrorist cabal of witches who object to the idea of conscription.

“They see it as a form of slavery,” Laurence notes. “These young women, when they’re eighteen, go to Fort Salem and then the army owns the rest of their lives. They control their bodies and choices. The Spree finds this untenable. Other nations also have witch armies, in order to keep up with American forces, and have adopted the same idea of conscription and life-long service models. So this is a global concern for The Spree, who want to bring the world back into a ‘Witch Eden.’ But that would require remaking the world. The way they attack is terrifying, in terms of these mass murders, but they’re trying to make the messiest and noisiest statement they can.”

Despite not getting along at first, Raelle, Abigail, and Tally discover that, as a trio, they’re the most powerful cadets in training — with each one of them belonging to a specialized field of magic.

“The types of witches you see most often on the series are Fixers, who are medics, and Blasters, which is what Abigail is and they’re about dispensing intensely powerful weather,” Laurence says. “And Tally is a Knower, as her talents center around sights and divination and remote viewing. If you think about those three talents, those work very well as a self-contained unit.”

He adds, “Outside of that, there’s Necro, which is the study of death magic and resurrection and communicating with the dead and employing the dead to surveil and make bombs and so forth. But you’ll see more as we go along. And one thing that we’ll get into in Season 2 is Naval witchery and Water witchery. And there’s the Conclave, which is a group of Diviners who are pulling strings behind the scenes. It’s kind of endless but it’s all rooted in this military aesthetic that’s really fun to play around with.”