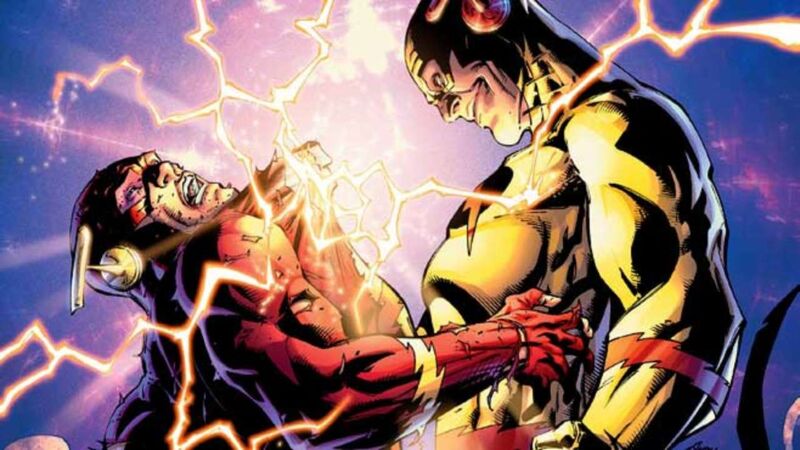 The Flash is arguably one of the most recognizable superheroes in comics, especially since the CW TV show grew in popularity. While there have been four separate characters to carry the Flash mantle, Barry Allen is considered to be the most popular Flash. With so many Flash comics out there, which ones are worth your attention? Here are five of the most beloved Barry Allen Flash comics.

Showcase #4 released in 1956 and introduces Barry Allen as a police scientist. While working at his lab one night, he gets doused with chemicals and is struck by a bolt of lightning, becoming the fastest man alive. This comic introduces iconic aspects of Flash mythos, such as Barry’s Flash ring and Iris West, who eventually becomes Barry’s wife. Showcase #4 is known as the comic that revived the public’s interest in superheroes and began the Silver Age of Comic Books.

Without this comic, superheroes wouldn’t be where they are today. Showcase #4 re-imagined the Golden Age‘s original Flash, Jay Garrick, for a new age. Due to its success, DC revived other Golden Age superheroes such as the Atom, Green Lantern, and Hawkman, among others. It has a great origin story and is an essential read for any Flash fan.

The Flash of Two Worlds

Released in 1961, The Flash of Two Worlds introduces Jay Garrick to the Silver Age. In the comic, Barry is performing super-speed tricks for kids at an orphanage, but then suddenly disappears, reappearing outside the city limits of an unfamiliar city. He soon realizes that he is in Keystone City, the fictional hometown of his favorite comic book superhero, Jay Garrick. Barry figures out that he vibrated between the dimensional barrier and has arrived on an alternate Earth. He seeks out Jay Garrick and helps him stop the Fiddler, Shade, and the Thinker, all of whom are Golden Age villains.

Not only does this comic revive Jay Garrick, but it also introduces Earth-Two and the concept of the multiverse to DC Comics. Eventually, it is established that all DC superheroes from the Silver Age reside on Earth-One, while all DC superheroes from the Golden Age reside on Earth-Two. The multiverse was one of DC’s most ambitious creations and would’ve never come to fruition if it weren’t for the success of The Flash of Two Worlds. All Flash fans and DC fans, in general, should read this classic story.

Crisis on Infinite Earths is a twelve-issue limited series that released monthly from April 1985 to March 1986. It brings together the superheroes of the DC Multiverse to face the Anti-Monitor, a cosmic entity from a universe of made of antimatter. He begins destroying countless realities to become the ruler of every reality. In the end, the multiverse becomes a single universe, but it comes at a cost.

This series may not be a Flash-centric story, but it has a monumental impact on Flash mythos. In the eighth issue, the Anti-Monitor is building an antimatter cannon to aid him in the destruction of the multiverse. To save the multiverse, Barry Allen runs circles around the cannon’s energy core.

He runs faster than ever before and builds enough energy to destroy the cannon, but it is too much for his body to handle and he eventually disintegrates into thin air, leaving behind his costume and Flash ring. This is considered by many to be one of the most heroic sacrifices in DC’s history. After Barry dies, his protégé, Wally West, carries on his legacy and becomes the next Flash.

After twenty-three years, Barry Allen returns to the land of the living in 2009. It turns out that after his “death,” Barry became trapped in the Speed Force. The Flash: Rebirth is a six-issue miniseries that follows Barry as he readjusts back to his life after being gone for so long. He feels out of place and questions why he was able to escape the Speed Force while many other speedsters have failed to do the same. In addition to bringing back Barry Allen, this miniseries brings many changes to Flash mythos.

Barry learns that, when he gained his powers, he didn’t just tap into the Speed Force, he created it. When he created the Speed Force, it allowed every speedster across time and space to have access to it. This is just one of the changes revealed in Flash: Rebirth. Given that this miniseries is one of the most beloved Flash comics, every Flash fan should pick it up and discover what other secrets it has in store.

Flashpoint released in 2011 and is one of the most crucial comics to DC’s modern lineup, as it is the catalyst for DC’s New 52 run. This comic starts off with Barry waking up in an alternate timeline where his mom is alive, the Justice League doesn’t exist, and Aquaman and Wonder Woman are at war with one another. To top it off, he no longer has his powers. He learns that Batman still exists in this timeline and goes to him for help. To his surprise, the Batman of this timeline is Thomas Wayne, Bruce Wayne‘s father.

Barry insists that this timeline is the result of the Reverse Flash messing with time, and enlists Thomas’ help to bring back the original timeline. When Barry eventually fixes the timeline, it merges with the DC Universe, the Vertigo Universe, and the Wildstorm Universe, which ended up bringing some changes to DC comics. These changes get explored in the New 52. Fans of the New 52 should thank Flashpoint for setting the stage.

Flashpoint is so popular that it DC adapted it into a movie called Justice League: The Flashpoint Paradox and even loosely adapted into an episode of The Flash. This comic shows how important of a character Barry Allen is to the DC Universe, and shows how much an impact he has on it.

Will Davis
XxSilverboltxX
Writer. Avid comic book reader. Lover of superhero shows and sci-fi. The Flash is my guilty pleasure.