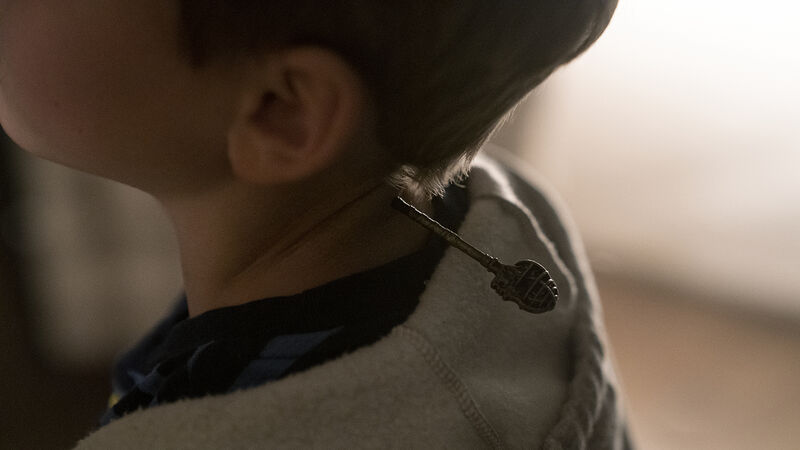 It’s taken over a decade of development — including an unaired pilot episode produced for FOX in 2011 (which was screened at Comic-Con after the network passed on it), a movie trilogy for Universal announced in 2014 that was never made, and then yet another unaired pilot produced for Hulu that the streaming service passed on in 2018 —  but Locke & Key, the acclaimed comic by Joe Hill and artist Gabriel Rodriguez, is finally a series.

Premiering Friday, February 7 on Netflix, Locke & Key follows a heartbroken trio of siblings, reeling from the murder of their father, who relocates to their family’s old mysterious house – a Massachusettes manor that contains enough sinister secrets and haunted history to put them all in danger.

As teens Tyler (Connor Jessup) and Kinsey (Emilia Jones) adjust to a new school, their younger brother Bode (Jackson Robert Scott) gets caught up discovering magical keys throughout the estate. Keys that allow the user to unlock various awesome (and sometimes awful) abilities.

Locke & Key comic creators Joe Hill and Gabriel Rodriguez, who served as writer and artist, respectively, along with the show creators Carlton Cuse (Lost, Bates Motel) and Meredith Averill (The Haunting of Hill House) — Cuse also worked on the Hulu version — recently took part in a Q&A event for the show where they spoke about the decision to shift the story from horror to “dark fantasy.” Also… is there room left for a Season 2?

As the show’s main setting, and as a place filled with both wonders and horrors alike, the choice was made to have Keyhouse , the Locke family mansion, be a welcoming presence. That it wouldn’t be a place that would instantly creep people out.

Care and concern had to be given to the house’s actual layout, which is something writer Joe Hill never paid much attention to initially. “[Gabriel] lovingly crafted this blueprint of where everything was, which I actually never bothered to look at, so I’d just say ‘they’d go into the bathroom off the kitchen’ and Gabe would be like ‘there’s no bathroom there!’ So I’d modify it. But he kept going crazy because I kept putting stuff where it didn’t belong.”

“I mean, I was shocked to discover, about 20 issues in, that Tyler and Kinsey’s rooms were on the third floor of the house in the comic,” Hill laughed. “I didn’t know there was anything up there. Eventually, Gabe and Chris Ryall, the editor, connived to put the blueprint in a comic so the blueprints were published. Thus locking me into the actual geography of that house. That is how they finally trapped me into paying attention to what was in there.”

When creating the actual Keyhouse for the show, Cuse spoke about how it needed to be practical and functional, which is something he’d learned from Bates Motel. “It was very important to create these traffic patterns, and this circulation so that you could follow these characters as they moved through the house,” he explained. “Which is a practical lesson I learned while building the Psycho house for Bates Motel. It’s basically thinking about how you move actors from space to space. We sort of replicated the same idea.”

“The essence of it all really came from Gabriel’s designs,” Cuse continued, “and then, emotionally, our idea was to make it feel inviting. You know, Meredith and I would joke around that Hill House and other haunted house shows would [make it so] you don’t want to be there.”

SOFTENING THE HORROR,
STRENGTHENING THE FANTASY

Fans of the comic will immediately notice a shift in tone, as the Netflix series steers away from the baseline horror elements of the comic.

“The show is a work of dark fantasy,” Hill said, “but it also comments on horror a lot, in a way that’s interesting. So it isn’t horror, but it talks about horror a little bit. There’s the ‘Savini Squad,’ who are a squad of horror enthusiasts. They talk a lot about ‘final girls.’ It’s meta. It’s not as meta as something like Scream or Cabin in the Woods, but there’s definitely a thread of conversation about fantasy and horror and films. Using what people have learned about pop culture to adapt to the situation they find themself in in Keyhouse. Which to me makes sense.”

“In any zombie movie or zombie TV show,” he continued, “the biggest problem is accepting that no one has any idea what’s happening. Where’s everyone been for the last 20 years of pop culture. Zombies are on the move so what’s your plan?”

Rodriguez noted that the show still keeps the most important theme from the comic. “Despite having magical and horror elements,” he said, “the story is about how true horrible things that you have to be scared about come from the way people treat each other. That’s something that’s in the bottom line of Locke & Key. That’s something that’s really powerful to explore inside a horror and fantasy story. These are just mirrors to see the way people treat each other.”

The tonal shift away from formal horror didn’t always mean that major scenes from the comic got cut however – just shifted. “In the Hulu version and in the comic, the story starts with the brutal murder of Rendell Locke,” Cuse said. “It’s such a powerful piece of storytelling. In a way though, it felt over-weighted. When you’re doing a show that delves into magical keys and the wonderment of them, and these kids coming of age, we didn’t want to the audience to look at the brutal murder of their dad and say ‘Oh, this show isn’t for me. This is not the type of show I want to watch.’ So we decided to show that scene in flashbacks. It’s no less emotionally effective, but it does say ‘this isn’t what the show is.’ It’s only part of the show.”

Averill commented on some more changes as well. “In the previous version, and I think this is what Hulu had pushed for, there was more of an emphasis on the adult characters,” she said. “And we certainly tell a lot of stories with our adult characters, but since it’s the kids who experience the magic, we lean much more into their stories.”

“[The show] has the elements that I think people who love the comic will want,” Hill stated, “but you’re also not safe because you’ve read the comic. You’re not docile. The show will still occasionally pull the rug out from under you and take you in a direction you never saw coming. You read the comic and you thought you were prepared, but it turned left when you thought it would go right. I also think it’s important because you want to keep people off-balance.”

Since the Locke & Key’s first season takes us through most of the comic, what could be left for Season 2? And have the creators even started working on a sophomore run? “I think that if you’re a television creator, you have to spend your bullets,” Cuse said, regarding Season 1 using all of the comic. “You really do. For us, the goal was to tell the best first season story we could and then just feel confident that by doing that well have enough narrative elements open up to craft a great second season.”

“And that’s proven to be true,” he continued, “and though Netflix doesn’t officially pick shows up until they’ve got some data on how they’ve done, they have paid for a writers’ room, so Meredith and I have been working on a second season. And it’s really good. And I think it definitely has elements of the comic book, but this show is now a different living, breathing element with other things. You have these characters who are brought to life and now you get this character drama that maybe you didn’t expect. You start seeing how these characters interact with each other. A lot of things arose out of that and were leaned into and we’re really excited about where Season 2 is going. It’s still connected to the comics, for sure, but it has its own life.”

“We have not been approved for a second season,” Hill said, clarifying. “We’re waiting to see if that happens. The backup plan is that if we’re not able to get a second season we are going to be using the house as an AirBnB.”