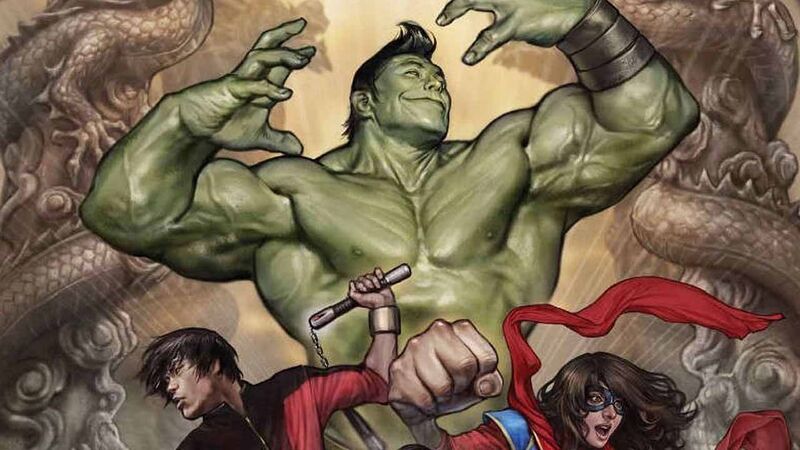 When a waitress delivers a table full of superheroes their bill in issue 15 of Marvel’s Totally Awesome Hulk, a mundane event becomes a battle. Shang-Chi and Jimmy Woo both lunge for it.

Martial arts master Shang-Chi strikes Jimmy’s arm, forcing him to release the scrap of paper. The Agent of Atlas retaliates with a stun blaster in an effort to take it back. Meanwhile, titular Hulk Amadeus Cho takes advantage of the distraction and slips by the melee to hand over his credit card.

It’s a moment full of playful action, yet my audible delight upon reading it wasn’t due to its lighthearted fun. It was because I recognised the routine.

Fighting on a Full Stomach

Originally gathered for a community event targeting Asians, the group become known as the Protectors – Marvel’s first superhero team who all “just happen to be Asian-American.”

It’s an important milestone in Marvel history. Yet for me, the group’s battle over their dinner bill held equal if not more significance.

Fighting to pay the cheque is a known ritual in Asian communities. It’s a battle you prepare for, deploying strategies such as purposeful eye contact with the waiter, detouring to the counter on your way to the toilet, and hiding cash in your companion’s bag when they aren’t looking.

Even so, despite its ubiquitousness, I never expected this interaction to be given pride of place in a Marvel comic.

Entertainment media often deals with ethnicity as an appearance — dark hair and dark eyes, a freckle on a crowd’s complexion. It’s true there is power in simply being visible. However, confining Asianness to a face doesn’t reflect the people who wear it. The characters might reference a stern parent or mention a second language, but in many cases an artist could substitute in a white body and there’d be little to give it away.

In Totally Awesome Hulk, Pak recognises there is more than skin in the game. Being Asian changes how you interact with the world, and how the world interacts with you.

The handful of Asian superheroes scattered throughout comics rarely deal with each other. If there are other Asians in their stories, they’re typically family or ninjas. The people who surround you affect who you are, and there are few opportunities for Asian superheroes to be Asian.

The Totally Awesome Hulk #15 not only identifies the omnipresent, unacknowledged cultural code-switching, but unapologetically revels in it.

A few weeks after my mum first arrived in Western society in the early ‘80s, she and my dad ate lunch at a small roadside cafe. A group of five or six white people sat at the next table, and as they finished, my mum was impressed to see one of the men stand and hurry to the counter – until she heard him tell the waitress the cost of his share.

“It was very stark, very odd, because we’d never seen that.” Mum laughs when she recounts the story now. “We just assumed he rushed so that he could pick up the bill for the table.”

Mum soon learnt that reaching for the bill in Australia will quickly put you out of pocket. There are certain things you don’t do when you’re hanging out with non-Asians.

You explain more and eat less. You change your words and the way you say them. It’s a slight adjustment of behaviour, a straightening of the back, and a broadening of the smile. Life is separated into two sets of codes, and you learn to flip between them like flicking a light switch. A fitting premise for our newer Hulk (now known as Brawn), who already manages a difficult duality.

Comics have long been written in that parallel language of young adults “still” living at home, shoes worn indoors, and restaurants with tablecloths. My mum has always been concerned that I speak proper English, and I know how to navigate this ruleset. But it isn’t my native habitat.

The Totally Awesome Hulk is the first time I’ve seen Asian-American superheroes with the light on.

They tease each other with Asian stereotypes. They share their parents’ hopes for them. They joke about fighting kaiju and ninjas, gripe about societal expectations, enthuse about food, and belt out ‘Empire State Of Mind’ at karaoke. They fight over the bill.

Amadeus, Cindy, Kamala, Jake, Jimmy, and Shang-Chi are people I’ve hung out with, breathed to life by a writer who knows their lives. They have an unspoken understanding born from shared experience and their interactions ring true, filled with the nuance and insight that only comes from being Asian in a Western society.

These scenes are folded seamlessly into the world of superpowers and heroes. They’re normalised, world-saving superheroes engaging in the same everyday cultural code-switching that so many people live with every day.

Seeing these superheroes have the same conversations I’ve had, the same struggles, the same concerns, I wanted to shove the pages under the noses of everyone I knew with bright-eyed wonder. These heroes didn’t just look like me – they were me.

A single issue of a Marvel comic is only 20 pages long. Page space is a precious commodity that must be carefully rationed, scenes weighed for value and discarded if deficient.

Issue 15 of The Totally Awesome Hulk dedicates three pages to who pays the dinner bill. One page to talking about food. Two to discussing parents. Heightened by superpowers and made mundane by lack of explanation, it sets typically marginalised interactions as baseline and acknowledges their worth.

The dinner scene is silly and inconsequential, unnecessary, and without much bearing on the arc’s wider plot.

It’s also the best of what superhero comics can be.