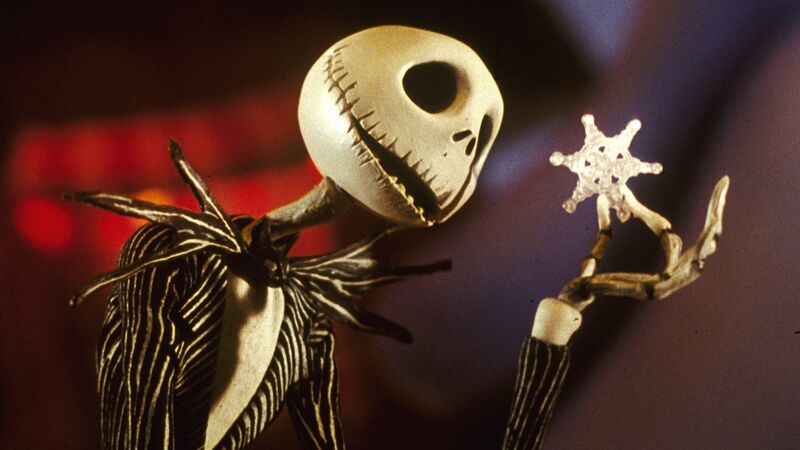 From Poem to Festive Juggernaut: The Story of ‘The Nightmare Before Christmas’

It’s strange to think about it this way, but if you’re aged 21 or younger, chances are you might not understand the fuss about Timothy Walter Burton. For one particular generation, the American director is pop culture’s gothic overlord, pumping out classics like 1988’s Beetlejuice, 1989’s Batman (for those of us who prefer our comic book movies pulpy and un-Nolan-like, still the best cinematic depiction of The Dark Knight), 1990’s Edward Scissorhands and, released 25 years ago this year, 1993’s iconic stop-motion musical The Nightmare Before Christmas.

Sadly, for the generation that followed, Tim Burton isn’t much more than the guy with the keys to Johnny Depp’s costume chest. For so long fandom’s most revered creative, few observers of ’90s pop culture would have thought this would be how his career would play out. Having spent the latter part of his filmography mostly eking out and amplifying the inherent creepiness within fairytales, next year Burton returns after a three-year absence with a live-action adaptation of Disney’s classic 1941 cartoon, Dumbo. Know these words are being written with shaky hands and much trepidation. Goodness knows what Burton’s take on Dumbo holds. Sometimes an elephant is just an elephant, y’know?

Burton has made good films since The Nightmare Before Christmas – in fact, released just a year later, his eponymous biography of the cult filmmaker Ed Wood, might even be a great one. 1996’s Mars Attacks! has merit. 1999’s Sleepy Hollow replays better than you’d think almost two decades on. And while he’s never quite recaptured the gothic glory of Nightmare, 2005’s Corpse Bride and perhaps more so, 2012’s Frankenweenie, have continued to demonstrate that he remains really very good at creating very emotive, technically strong, narratively engaging stop-motion animations. At the same time, it’s still hard not to see his telling of the Pumpkin King Jack Skellington’s story as Burton hitting his creative peak.

The gestation of Nightmare is long but it never lost momentum. Burton had written a three-page poem titled The Nightmare Before Christmas around 1982, while in the employ of Walt Disney Feature Animation. He’d been inspired by television specials like How the Grinch Stole Christmas! and the poem A Visit from St. Nicholas.

He wasn’t short of ideas for what his poem could become. He envisioned it being read by horror icon Vincent Price, Burton’s favourite actor. Maybe it could be worked into a children’s book. There was talk of a short film or a 30-minute holiday special. Concept art and storyboards were fleshed out in conjunction with legendary Art Director Rich Heinrichs. Consultation was sought with Disney animator Henry Selick (who, decades later, would bring Neil Gaiman’s Coraline to life). Ultimately Disney thought Nightmare too weird. Burton was fired from Disney in 1984, allegedly because a fledgling version of what would later become Frankenweenie left the children who’d attended the test screenings in tears.

Burton would go on to direct Beetlejuice and Batman, his cult appeal growing in tandem with those movies’ success and acclaim. Still, he couldn’t stop thinking about the strange poem he’d written all those years prior. Burton did some digging and found to his surprise that Disney still owned the film rights. Yet this was a different Disney than the one he’d been shown the door of. Reinvigorated. Daring. Willing to think outside the box.

Chairman Jeffrey Katzenberg, whose decade of stewardship between 1984 and 1994 oversaw the releases of The Little Mermaid (1989), Beauty and the Beast (1991), Aladdin (1992) and The Lion King (1994), wanted to keep the streak of success within feature animation going. Company president David Hoberman echoed the sentiment, believing Nightmare could send a strong message that Disney was once more capable of “thinking outside the envelope. [That we] can do different and unusual things.”

Burton didn’t want to direct. He was busy with 1992’s Batman Returns, and besides, he knew just the man for the job.

“Tim realised he didn’t want to direct Nightmare because the stop-motion would be too slow and painful for him,” said Henry Selick, who was more than happy to revisit the work he’d done with Burton years before. “He had seen my animation work and thought I would be a good fit.”

The late Michael McDowell – “the finest writer of paperback originals in America today,” said Stephen King once — signed on to adapt the poem. Burton and McDowell, who’d previously worked together on Beetlejuice, disagreed on how the story should be told. Burton decided to make the film as a musical, bringing in composer Danny Elfman, besides Depp, Burton’s most frequent collaborator. The American writer Caroline Thompson was brought in to adapt McDowell’s story as a screenplay.

Concessions had to be made to get the film to the screen.

“For example,” Henry Selick told Cartoon Brew earlier this year, “there’s a scene where Sally tires of being holed up with the evil scientists; she wants out. The evil scientist grabs her by the arm and she pulls away until the arm actually tears off. Well, that could have been horrific. But instead of flesh and blood inside her, I had her stuffed with leaves and then as she runs away we see her arm being held by the scientist waving goodbye to her, which ends up being pretty funny.”

Still, concerned the finished film would be too scary for children, Disney wobbled with regard to how to release the movie. The film received a PG rating (rare for an animated movie in 1993). Disney decided to release the film via distribution label Touchstone instead of under their own name. Marketed with neither conviction nor confidence, the film’s initial theatrical release barely made more than $50 million.

It wasn’t until 2000 that Disney, surprised by the cult following that had sprung up around the film, engaged in a decade of re-releases. They were ultimately keen and shameless enough to capitalise on the underground success their bastard child had garnered over the years. Indeed, were you to throw a brick into a Warped Tour crowd at the turn of the millennium you’d be odds-on to hit someone with a tattoo of Jack Skellington on their arm, most likely a superstar emo band themselves. Anyway, 2006 saw the movie enhanced in 3D. On the accompanying soundtrack release, the likes of Fall Out Boy, Marilyn Manson and Panic! At The Disco covered seminal songs from the movie.

Disney re-released the movie in 2007. Then in 2008. A Blu-Ray release followed in 2011. Next year, after successful outings at LA’s Hollywood Bowl in 2015, 2016 and 2018, a stage production of the movie heads to the UK for the first time. Attend a Disney resort on Hallowe’en, and you can’t move for Oogie Boogie wiggling his maggot infested sack in your face. What a difference 34 years make. Disney loves The Nightmare Before Christmas in 2018. They love Tim Burton too. After his adaptation of Alice In Wonderland made them a cool $1 billion in 2010, they even let him remake the film that got him fired first time around, Frankenweenie.

It’s almost understandable that a project like The Nightmare Before Christmas would nullify Burton’s creative zeal. To conceive of something so wonderful so early in your career, to fight for the realisation of a project through the turbulence it subsequently took, to have your creation buried by the organisation tasked with creating it, and then… validation, well, it’s almost enough to make you want to put your feet up and muck around with Johnny Depp for the following 25 years. This Christmas, why not revisit Tim Burton’s finest hour (and sixteen minutes)? We can only hope the future holds a return to such stunning form.