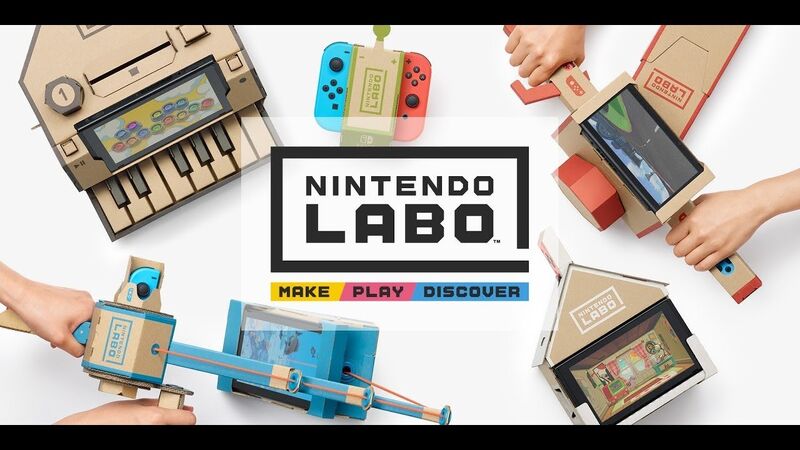 Nintendo Labo Turns Cardboard Into Magic and Kids Into Coders

When you first see the new Nintendo Switch add-on — the Nintendo Labo— in action, it’s almost impossible not to be overcome by childlike glee. In what feels like genuine magic, Nintendo’s latest eccentric creation transforms sheets of unassuming cardboard into the kind of fully-functioning toys that kids have always imagined them to be.

In other words, no matter how old you are – Labo is an absolute delight.

Each Labo kit contains a range of different cardboard creations for you to construct, with the resulting playful inventions going under the adorably named moniker of ‘Toy-Cons’. After each Toy-Con has been lovingly put together (and if you’re us, pimped with googly eyes and coated in gratuitous bits of felt), slot a Nintendo Switch Joy-Con controller (or the console itself) into your new malleable masterpiece and watch as these cardboard creations come to life.

We spent three hours playing with Nintendo Labo, where we built our very own hipster elephant RC car, reeled in some virtual mackerel and even composed a Beethoven-bothering symphony on a cardboard piano. Needless to say, as overgrown kids ourselves, we had a ton of fun messing around with Nintendo’s wonderfully new eccentric creation.

Yet, despite the obvious joy that comes with seeing cardboard cut-outs come to life before your very eyes, it’s the almost endless possibilities for user creation that has us most excited about Labo.

Whether you choose to purchase the six Toy-Con Variety kit, or the more singularly focused Robot kit, each Labo pack includes a piece of software called Labo Garage. As well as the Toy-Cons allowing kids to be creative with their own cardboard design, this intriguing digital workshop also lets them get creative with their code too.

Featuring a very un-Nintendo black and white interface, this simplistic suite allows users to create their own uses for their Joy-Con and Toy-Con alike. Clearly inspired by the creativity coming out of the Raspberry Pi maker community, Nintendo is handing players the tools to make their own fun. Much like with real coding, here, users can simply choose an input for each Joy-Con or Toy-Con, set a condition and then link it to an output.

It’s alarmingly simplistic stuff, allowing us to transform our fishing rod Toy-Con into a bike steering wheel within minutes.

By messing around in the Garage, you can use a combination of Joy-Con and Toy-Con tech to create your own little mini-games, whether it’s turning the giant backpack that comes with the Robot kit into a lasertag-style hit box (and shooting each other with the Joy-Con’s of course) or using the Joy-Con’s vibration tech to play hide and seek, the mind boggles with the coding possibilities.

While messing around with Nintendo’s latest feels like you’re experiencing something entirely new, ironically, the two main technologies that power Labo have been around for decades – Infra Red and controller vibration.

Take the RC cars for example. Tapping on the Switch’s touch screen, players can increase or decrease the intensity of each Joy-Con’s vibration, using the resulting buzz to propel the cardboard ‘car’ across the surface below it.

Still, whether you plan to use your cool little creation for races or Robot Wars-esque death matches, there’s a ton of innovative fun to be had here.  And the best part? It all comes from a souped-up version of the same controller rumble gamers have been using since 1997.

Music to our ears

The tech that works behind the scenes on our favourite Toy-Con though — the piano — is far cleverer. Lightly press any cardboard key and as if by magic, you’re greeted by the sound of a pitch-perfect piano note. Taking a peak behind the lid of our newly constructed instrument, all you can initially see is just an empty box housing a Joy-Con.

Take a closer look, however, and you’ll notice that each key of the piano has been labeled with a tiny infra-red sticker. Once you press a key, the infra-red sticker is moved into view of the Joy-Con controller and its IR sensor then immediately reads the signal and plays the corresponding note.

It’s a stupendously clever use of aging tech, and one that’s made even more enchanting thanks to the addition of removable dials that allow you to chop and change the set with different piano sounds. Popping in one of these custom controllers switches the piano’s tone, letting you swap out traditional keyboard sounds for a chorus of mewing cats or even for a more synthy tone, if  that is, you take the time to cut your own piece of cardboard into a sine-wave shape.

As well as simply playing around with sounds in the Toy-Con piano, Nintendo has wisely let you record your audio adventures too. Thanks to a cool bit of built-in recording software called Piano studio, users can instantly immortalise their musical masterpieces, even setting the tempo of the track with a shake of the Joy-Con.

It’s by far the most impressive Toy-Con, showing off the true potential of Nintendo’s offthewall new tech. And if we’re honest, the piano is still blowing our minds a little bit.

Like the best Nintendo creations, this new add-on for the Switch takes the age-old concept of child-like play and manages to use technology to make it feel fresh again. Just as your first time with the Wii elicited that “no way!” reaction, Labo too is an experience that amazes and baffles in equal measure. It’s undeniably a product that’s aimed at kids, but like everything Nintendo, this is just as enjoyable for the young at heart too.

If you’re a hardcore gamer looking for a meaty epic to sink your teeth into, this probably won’t scratch that itch, if however, you’re looking to build and code and have siblings or children of your own, Labo is well worth shelling out for.

We can’t wait to see what the community does with it. We will be exploring the kit further over the coming weeks, so for more articles and videos on the possibilities of Labo and the individual Toy-Con’s themselves, keep it locked to FANDOM. Nintendo Labo launches April 20th in the US and April 27th in Europe.