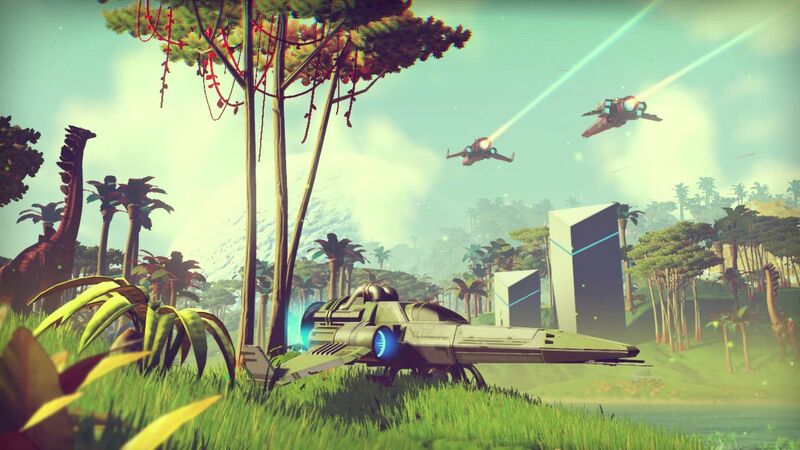 It’s been some time since my last log. I’ve since left the Vy’Keen in search of riches due to the financial strain of exploration. It has not been easy to stay financially afloat in these foreign worlds. My opportunities and interactions with traders have been random. Certain races pay a lot of units for resources that other traders deem worthless. Now I’m unsure what I should be carrying in my ship’s limited cargo.

I recall one recent instance where I was walking back to my Rasamama S36 on an off-planet trading post. I had just had an unpleasant experience with the station master who was low-balling me on some of my wares as I tried to explain to him that they were worth more. He wasn’t having it so I did the only thing I could and decided to take my business elsewhere. On the flight deck outside the station master’s room, several other ships were docked and looking to trade. These ships were all bigger than mine and their inventory seemed to be infinite. Luckily for me, their prices were fair and I ended up leaving satisfied. As I headed back to space, a thought occurred to me: Would my adventure be easier if I just got a bigger ship?

While making jumps between systems, I’ve been reading about 18th-century explorers and the hardships they had to endure on their travels. Obviously, their adventure was much different from my own, but one recurring theme we have in common was the need to manage their inventory. Like myself, explorers in these times had only enough space to carry items vital to their mission. If these explorers were not restricted by the terrain and their technological knowledge, one would assume they would expand their cargo to ensure their success. I feel like my beloved Rasamama S36 might be holding me back. While it’s been a fine ship, my time spent at trading posts and managing my previous inventory has hindered my ability to explore this vast galaxy.

I’ve been here in this system for about a month. According to the database, I am the first to discover the system. After exploring several of the planets, I decided to name the solar system “Aurum,” the Latin word for Gold. Each of the planets are ripe with the resource yet it’s still a commodity that has been in high demand at every trading post I’ve visited.

The current planet I’m mining I’ve named New Sierra Nevada, an homage to a 19th-century era where porspectors discovered gold in a mountain range located in the then-state of California. The trading post here is one of the biggest I’ve seen. There are 6 docking stations for starships and it’s always bustling with aliens eager to trade. As I trade with transients, I’ve begun to casually inquire if any are willing to part with their vessel. I know that some of these ships I’ll never see again, but at the very least it was helpful to learn how many units I needed to amass for such a purchase.

Yesterday, I finished farming my last gold deposit just a few clicks north of the trading post I frequent most often. It’s been a grueling month for me and it was bittersweet to realize that this was probably the last time I’d be visiting this outpost. After my transaction with the Korvax trader, 1 Million units sat in my purse. Exhausted from a long day of tedious mining and countless trips to the trader, I decided to take in the sunset and watch the ships come and go from the outpost. As each one landed, I’d try to imagine myself inside, traveling the stars on my way to the center of the universe.

With the sun behind me, I gathered myself and sauntered over to my ship. The fight deck was less busy now with only my ship remaining. As I tinkered with the console, a late customer touched down next to me and asked to see my wares. He was a Vy’Keen trader that was looking to sell artifacts. His ship was stunning — a large, sleek fighter ship with ample inventory space. After idly chatting, our conversation turned to the home system that I hold dear. We spoke about the sights, sounds, and smells of the planets and its inhabitants. Eventually, the conversation turned to my journey and what my current objective was. I explained the dilemma with my current ship, pointing to it as I describe its capabilities — or lack thereof.

His eyes widen as I keep talking and he says that our paths crossing was no mistake. He’s been trying to sell his craft recently to support a new addition to his family. To help out a new friend and find the ship of my dreams was an unexpected turn of events, to say the least.

He invited me inside his Hichidak S41 to look around and I instantly fell in love. Sitting in the captain’s chair, he placed his hand on my shoulder and asked me what I thought. I responded with a wide smile and asked him how much he wanted for it. He casually asked for my ship in return and a couple hundred thousand units. Overwhelmed with joy, I shook his hand and insisted on giving him some upgrades I’ve been stockpiling, but he refused. We excitedly exchanged ship credentials and I transferred the units over to his account. We ended on a handshake before he left for home to tell his family the good news.

I write this from my new ship, still on that same flight deck — overwhelmed with that just happened. A month of hard work has paid off and I couldn’t be happier with the result. My eagerness for exploration rekindled, I can’t wait to see what this ship can do.