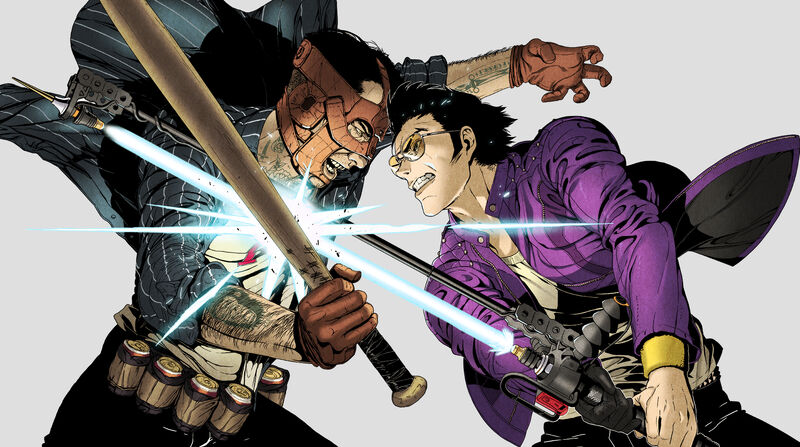 Suda51 Says ‘No More Heroes 3’ Will be “Bigger..Bloodier” and Like The Avengers

During a recent preview session for the upcoming spin-off, Travis Strikes Again: No More Heroes, Suda51 confirmed to Fandom that he was already planning No More Heroes 3. With the upcoming Switch game only a spin-off, Suda reveals that he is planning a proper third No More Heroes game – and that it will see hero Travis Touchdown face off against crazy, Thanos-esque villains.

“Nothing is set in stone yet, and of course it’ll depend on the success of Travis Strikes Again but I am working on an outline for No More Heroes 3 – a proper direct sequel for the series – and it’s going to be connected to TSA in a big way. Because, in No More Heroes 3, Travis is going to go up against crazier adversaries than he ever has before it’s going to be bloodier, more intense battles between assassins it’s going to be kind of like The Avengers – Thanos levels of crazy villains.”

While Suda states that the release of this much-anticipated threequel will depend on the success of the upcoming spin-off, No More Heroes: Travis Strikes Again, he sees this Switch adventure as laying the foundations for No More Heroes 3.

“In order for Travis to stand a chance [against these powerful new foes] I wanted to give Travis the chance to enter these different game worlds [in Travis Strikes Again] and power up- to learn some new skills and gain some more strength so that ultimately I can work to make Travis a more prominent character in video game history overall. The skill chips that you saw Travis collecting in Travis Strikes Again’s game world, I want Travis to take those with him to the next game, the next numbered installment.”

We recently got a chance to play Travis Strikes Again, and while it’s definitely a departure from the two mainline games in the series, it still oozes that same sense of shlocky b-movie charm that made the originals so irresistible. Expect pixelated violence, saving on the toilet and more cocky one-liners than you can shake a rechargeable laser sword at.

Sporting a top-down camera view, this simplistic Switch spin-off sees Travis sucked into a game console, and tasks players with dicing up enemies as our hero battles his way through levels based on very different styles of video games. Interestingly though, Suda reveals that this back to basic approach was completely inspired by the hypnotic hyper-violence of Devolver Digital’s Hotline Miami.

“Hotline Miami inspired Travis Strikes Again in a big way. I was really intrigued about [Hotline Miami] before it even came out and when I played it I was shocked — because it was just so different from the big AAA games we see out there. It did so many revolutionary things, one thing was the one hit kill – whether it’s from a gun or a knife -it just treated death in a very realistic manner and these days, we don’t even see that in movies – people can get shot or stabbed but manage to miraculously survive. But in this game you had to pretty much repeat levels over and over again and that’s something we don’t see very often these days.”

In fact, Suda fell so head over heels for Hotline Miami, that he decided he had to meet the dynamic duo responsible for the game.

“Eventually, I was able to meet the developers, Denaton. I thought they might be similar to me in the way I approach games and it turns out they were!  We ended up getting along really well. Even to this day I think that they’re real superstars. The fact that they made this amazing game, just the two of them – I really respect them. Meeting them really inspired me and made me want to go back to a smaller, indie-scale team and to make my own rendition of the big indie revolution that’s happening right now.”

Interestingly, his love of Hotline Miami encouraged Suda to delve into a wealth of other indie games too, eventually inspiring a bold new concept for Travis Strikes Again. Instead of our hero joruneying through fictional game worlds, the original plan was for Travis to slice and dice his way across a series of beloved, real-world indie games. Unfortunately, though, the realities of making this happen proved too much of a headache for Suda to navigate.

“I got the OK from developers at the start to use their IP and have levels based on indie games in Travis Strikes Again. But then I started thinking about it in more detail and how I’d need to write character dialogue for the character’s from those games while making sure that I kept everything true to [these characters’] original games. Doing that would mean I’d require double checks and triple checks from the original creators and the thing about that…. with the proposed schedule for Travis Strikes Again, it made me realise that it would be impossible to do something that deep across such a wide spectrum. So I had no choice but to only focus on one indie collaboration, and of course, I went with Hotline Miami!”

Suda is hesitant to spoil what happens in-game when it comes to this mysterious mashup, but he looks at us with a sly grin before teasing a bit more info about the Hotline Miami collaboration. “We were unable to make a complete level based on Hotline Miami, but there is a very limited Hotline Miami-esque situation that appears in the game. And I made sure to get it checked by Denaton and OK-d by them. That’s the deepest collaboration that exists in this game, the other [indie game] collaborations are in the form of t-shirts only.”