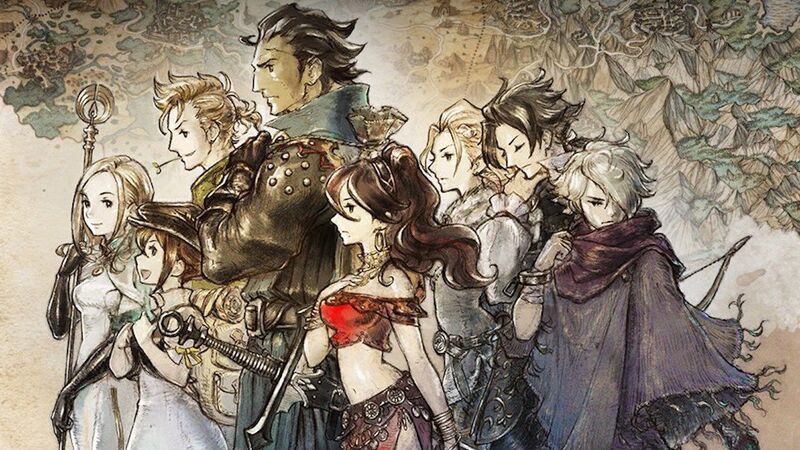 Octopath Traveler has been called a spiritual successor to Final Fantasy VI. It’s been called a continuation of the ‘golden era’ of RPGs. As the first big Switch-exclusive RPG from Square Enix, it’s understandably got a lot of expectation riding on it. But, after embarking on this lengthy adventure, we’re sad to say that it doesn’t quite live up to the hype.

Still, that’s not to say it’s a bad game — far from it. As an RPG, Octopath Traveler has some genuinely inspired ideas, offers some wonderful twists on the turn-based battle system, and is realised in an absolutely beautiful way.

It’s like the development team did a little tour of all the best JRPG battle mechanics of the last 10 years — looking at Shin Megami Tensei’s Press Turns, Bravely Default’s Braves and, uh, Defaults, and Final Fantasy’s job systems — and sewed them together into some beautiful, weird chimera. The battles, especially the tough-as-nails boss encounters in the mid-game, are where Octopath really shines.

The ‘2DHD’ pixel art graphics and lilting, jovial soundtrack keep your journey a joy to behold through the 60+ hours of gameplay, too. Yet, despite its charming little art style and enjoyable combat, there’s only so much aesthetics can do for a game that’s crippled by pacing issues and level-grinding bloat, especially when it feels like the narrative side of the game never really manages to get off its feet.

Octopath Traveler’s main conceit is that you can play as eight characters that adhere to your standard RPG classes: there’s a cleric, a rogue, a soldier, a hunter, a healer, and so on. At the start of the game, you commit to one character as your ‘protagonist’, who’s locked into your party through the game.

From there, you must go out and recruit all the other characters, playing through their prologues during the recruitment phase to get them on-board before tackling the rest of the story later.

It’s a novel and intriguing idea, but it soon becomes apparent that this structure isn’t particularly conducive to decent storytelling. The game plays out like this: you get a character, you do their chapter, you move on. The first eight times, this is charming — you’re still being introduced to the world and you’re still learning everything Octopath Traveler can do. New battle mechanics emerge, your party builds up, and you start to uncover the interplay in how characters work in battle.

Enter Chapter 2, and things start to get a bit… repetitive.

You realise the structure of the game doesn’t change, no matter what characters you choose, no matter what order you tackle the individual stories in: you enter a town, you go to a dungeon nearby, and you fight a boss. That’s it. Enter Chapter 3, and you start to get this uneasy sense of deja vu. It’s just that the level requirements are higher now, and the enemies you’re wailing on have a bit more armour.

Octopath Traveler promised a tale of eight heroes travelling together, set up like one of the most ambitious RPGs in history (Final Fantasy VI). Instead, you get a series of vignettes that are entirely narratively separated save for a few forced, optional interactions between no more than two cast members at a time. For RPG fans expecting a game where you’re drawn into the characters, their interactions, their interplay, their relationships, and their collective story, you’ll be sorely disappointed with the vast majority of the game.

And that’s a shame. Because individually, the stories are actually quite endearing and well-rounded. Considering there are eight distinct threads, they do vary in quality, but generally, you get a good feel for each character and their motivations.

That said, you’d be forgiven for thinking each of the character’s four chapters could be a side quest in a bigger RPG — there’s no real sense of urgency or weight to them, and you can never shake the feeling that these heroes are all just strangers in each other’s’ company as you play.

Think of it like Chaucer’s Canterbury Tales — each of these story threads works well alone and plays into an overall tone or mood in the same world, but as far as we’re concerned this could be a band of strangers roving around the world, helping each other due to some sense of mystic obligation rather than any kind of kinship.

When you think of other genre highlights — Persona, Dragon Quest, SaGa — Octopath just doesn’t match up from a writing perspective.

Thankfully, in just about every other area, the game delivers. The soundtrack is captivating and belongs up there with the greats of the genre, the experimental retro-HD pixel art graphics are gorgeous, and the sprite-work on your main characters and the bosses is nothing short of sublime.

The world, the sense of place it communicates, and the town hubs are all really well realised (though it would be nice if more quests linked places up, rather than just sticking to their ‘zones’). Dungeon design is pretty simple, but exploration is encouraged and rewarded, and, as always, you’ll never get bored of looking at it.

Each character starts out locked into their given class, but in Chapter 2 onwards you get the opportunity to mix up Jobs and make your Cleric double up as a Scholar, your Hunter double up as a Thief, your Apothecary double up as a Summoner, and so on.

This is when the gameplay opens up the most and Octopath reveals its ideal path to you: find yourself your four favourite characters in Chapter 1 and make them your key party. Spend a little time grinding levels and getting them ready for Chapter 2 and you should be ready to tackle all their stories until the end-game.

When you find some of the hidden classes the game has to offer, it’ll make the battle mechanics even deeper for you — and that’s great because that’s where Octopath is its best self. Then, if you’re into it, you can run through the rest of the game with the other four characters, enjoy their stories and figure out new strategies.

Unfortunately, it doesn’t really matter which you choose because the cast never really seems to gel as a team, and for many RPG fans, that’s going to be a real knife to the heart (especially if the ensemble cast is what really does it for you in story-based games).

We’re hampered by what we can say here for embargo purposes, but even for what little group-based payoff there is, your 50+ hour journey to that point makes it feel breathless and anticlimactic.

Is Octopath Traveler Any Good?

Octopath Traveler is a gem of an RPG with genuinely brilliant battle mechanics and a world worthy of celebration, but it’s hamstrung by an ambitious structure that doesn’t suit its narrative ambition.

Ultimately, this is a game that aimed for the moon and landed in the stars. It’s a game that can sometimes feels artisanally crafted, and in others bafflingly rushed. It’s an RPG that in one moment feels invigoratingly fresh, but in the next, frustrating stifled.

If you’re looking for an engrossing new portable RPG then Octopath is it. Just play it for the smart, turn-based gameplay…  and don’t expect it to win any awards for storytelling.