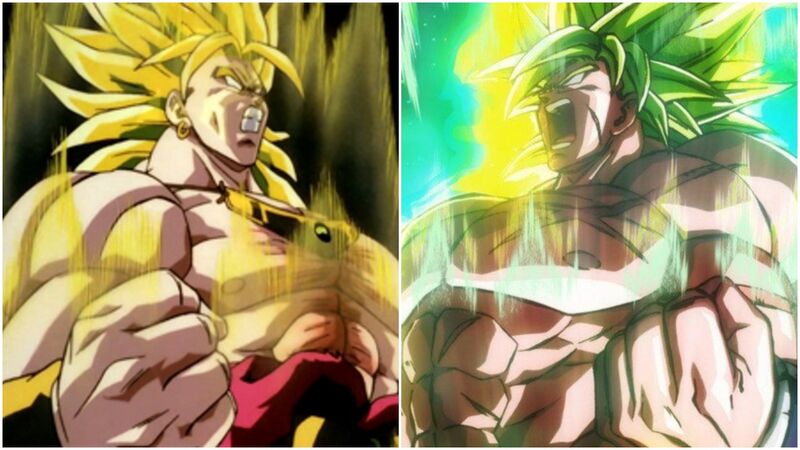 Original vs Super: Who’s the Best Broly in Dragon Ball?

Boasting a new look and an altered personality, this new take on Broly is just as deadly as the original. And now that he’s made his big screen debut, we can safely say that he’s also pretty impressive. But does Super‘s new and improved Broly trump the original? To answer this question, we’ll have the two face off in several categories — backstory, personality, and power — to determine which version of Broly — OG Broly or Broly: BR — is the best, once and for all.

In both versions, Broly’s unnaturally high battle power as a baby made King Vegeta freak out and try to get rid of him. The only difference is how he goes about eliminating Broly. In Dragon Ball Z: Broly – The Legendary Super Saiyan, King Vegeta’s men stab baby Broly, leaving him and his father, Paragus, for dead. In Dragon Ball Super: Broly, the Saiyan King sends Broly to a violent planet full of monsters in hopes that they’d kill him; both plans fail.

To their credit, both films do an excellent job of setting up who the two Broly’s would later become. In OG’s Broly’s case, it’s not hard to see what made Broly into the crazy monster we see in the films. He gets stabbed in the chest, watches his planet blow up, and, worst of all, has to endure baby Goku‘s crying for hours on end — all before he can even form words. No wonder he turns into such a mad beast.

When compared to OG Broly’s backstory, Broly: BR’s backstory feels like a cakewalk. Sure, he spends most of his life stuck on a grim planet with only his father for company, but this doesn’t break Broly, or make him lose his mind. But it does leave him with poor social skills and great loyalty to his father, who OG Broly was more than willing to kill.

When audiences first saw how violent OG Broly was, they couldn’t help but wonder what turned him into such a monster, and they got their answer. Broly: BR’s backstory does a lot of the same, but it doesn’t quite measure up to the original’s tragically epic backstory. OG Broly wins this round!

At his core, OG Broly’s defined by two traits: his sadistic madness, and his hatred of Goku. A self-proclaimed devil, he’s willing to kill everything in his path, simply because he can. When Paragus tried to flee the planet they were on, OG Broly crushed him inside his pod, laughing the whole time — brutal.

But it’s his hatred of Goku that defines him. He associates Goku’s crying with all that trauma he experienced as a baby and, in turn, blames him for everything. The mere sight of Goku was enough to send him into a rage in the first film.

In the second movie, Dragon Ball Z: Broly — Second Coming, Broly’s defeat at Goku’s hands washes away the little sanity he had left. In fact, aside from a single instance, the only word he can utter throughout the entire movie is “Kakarot,” Goku’s Saiyan name. He’s so obsessed, he can’t even tell Goku apart from his sons.

Thanks to only getting exiled, Broly: BR retained his sanity. Unlike the original, he’s a kind and gentle soul who hates fighting. And with his father as his sole companion most of his life, Broly: BR longs to make friends, as he did with the monster Ba.

Despite being loyal to his dad, Paragus treats his son no better than a tool; he’s always ordering him around. It’s Paragus who forces Broly: BR to fight, even going so far as to use a shock collar to force his son’s obedience.

When he does fight, though, Broly: BR has much in common in with his counterpart. He has yet to learn to control his power correctly, so it and his Saiyan instincts eat away at his sanity. It gets to the point where he can’t tell friend from foe, leading him to fight anything that moves.

So, in one corner, we have a Broly whose only defining traits are being a crazy bruiser and hating Goku. In the other, we have a Broly who hates fighting, likes making friends, and has an actual personality. Broly: BR has an actual character, and after seeing how Paragus treats him, it’s easy to sympathize with him. Broly: BR is the clear winner here.

As we’ve already said, OG Broly’s power is terrifying. In the very first scene of The Legendary Super Saiyan, we see him annihilate an entire galaxy. Not to mention, during the film’s big fight, Broly faces five Super Saiyans and a Super Namekian at once. He then, of course, proceeds to curb stomp them all.

To defeat him, everyone has to pour their energy into Goku — and even that doesn’t kill. It takes blasting him into the Sun to do that!

OG Broly was a terrifying monster, but he doesn’t hold a candle to the likes of Beerus, who can destroy entire universes at once. Broly: BR not only matches Beerus and the Destroyer Gods in power, he easily surpasses them.

Goku and Vegeta had to go Super Saiyan Blue (SSB) in Dragon Ball Super: Broly to fight base form Broly: BR, and once Broly went Super Saiyan, even that wasn’t enough to go toe to toe with him. It took them fusing their powers to become SSB Gogeta to beat him.

Both versions of Broly clearly have near unlimited power and strength. But Broly: BR’s power level surpasses that of actual gods. Broly: BR wins in a landslide!

And the Winner is…

By a wide margin, the new Broly is a welcome improvement over the original. While he may not have as dark a backstory as OG Broly, Broly: BR is better written and far more likable. With both Goku and Frieza having expressed interest in making him an ally, we will almost certainly see him again soon. Who knows, maybe he has a divine future ahead of him. No matter what, Broly is here to stay, and his fan power is maximum!