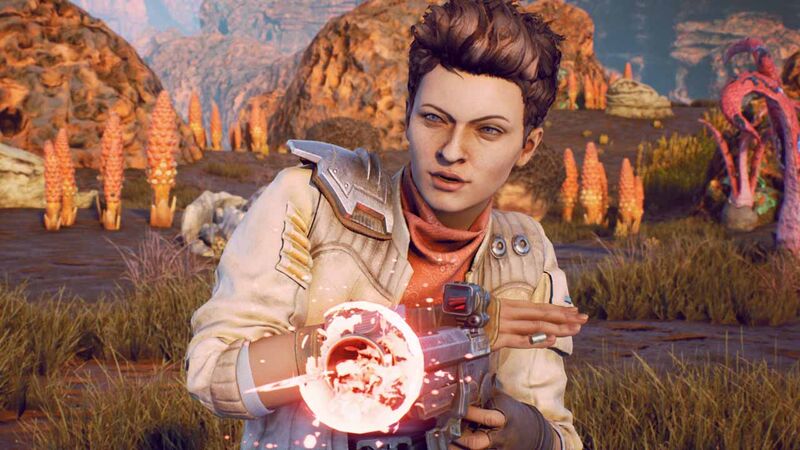 ‘The Outer Worlds’ Shifts Its Genre According to Your Choices

Obsidian Entertainment is no stranger to choice in its games. But far from contenting themselves with a branching story path, The Outer Worlds will actually shape its gameplay according to how you build your character.

Want a bread and butter shooter? Or something slower and more tactical like Fallout combat? In the mood for a bit of comedy? Want to be the main hero, or more of a squad manager? By investing into different skills, you’re changing more than your character — you’re deciding which genre you’re playing in.

The Outer Worlds takes place in a universe where colonisation has caused strife over the management of resources. Idealogues impose their beliefs on others. Megacorporations control all aspects of life. We’ll let you know when we get to the fictional part.

For this game, though, it’s not enough to change the story according to your choices. It wants to change the very core of how it plays. One could easily argue it’s several games in one.

We saw a section of gameplay on a particular world for which terraforming hadn’t worked. Not as intended, anyway. Its parent corporation had washed its hands of the situation and left. The remaining folks had to survive without corporate support, farming alien pig tumours (yep), hunting the fierce wildlife, and smuggling in expensive rarities.

Obsidian was excited to show off the humour in the game, which is everpresent — but those with a low intelligence score can increase this with additional “dumb” dialogue options.

“I wanted it to be these strange leaps of logic where concepts go over his head,” we were told by Dan McPhee, a narrative designer who pushed for the inclusion of dumb dialogue. “Because there’s a lot of humour to be found there. We took inspiration from Zapp Brannigan from Futurama, or Charlie from It’s Always Sunny in Philadelphia, those types of characters who are always just thinking in a weird way.”

It’s an idea that’s resonated well with Obsidian fans in the past, and effectively unlocks a sillier, more entertaining option in every conversation. If that Monty Python-eque kind of anti-role playing is what you live for in an RPG, simply neglecting your intelligence score will bend The Outer Worlds into that kind of game.

There is, however, a workaround. One in which you get to have your low intelligence cake and eat it too.

The Best of Both Outer Worlds

All of the potential companions you’ll come across have their own stats, and clever character chemists will play close attention to the alchemy of their squad. There’s a separate attribute that decides how effective a leader you are, and investing into this side of the game pivots The Outer Worlds more towards squad management.

There’s plenty of RPG theorycrafting to be done on this side of the game, and optimisation enthusiasts will be able to break out their spreadsheets. The leadership attribute boosts the abilities of your squadmates, and we were taken through a firefight in which we actively killed most enemies, but our squadmates geared up for massive charged attacks that looked like they could take care of everyone without us lifting a finger.

McPhee laughed when we mentioned that.

“I’ve definitely done that. That one definitely feels a little bit like easy mode. You kind of take a step back. You do still have to survive — a lot of things will still be shooting at you and stuff. But it was very satisfying to let them go in and just wreck things. There are some encounters where, for example, they’re not able to take advantage of weak spots or something like that. So for example a highly armoured target, I can’t just send them in blindly, I have to give them equipment that will work well against that armoured target. So I still have to be making decisions, I can’t expect it to just work all the time.”

But with their intelligence adding to yours, will you still have access to the humorous “dumb” dialogue?

Another highly useful tool we was was the ability to slow down time — the duration of which is decided by your investment into yet another attribute. Immeasurably valuable in firefights, we witnessed incoming projectiles rendered trivial with a simple slow-down and sidestep.

Matrix mode can help you pinpoint the weak spot on an enemy, make tactical choices for your squad, get out of danger, or simply do more damage. While McPhee mentioned the leadership attribute making things easy above, this one seemed like the hidden easy mode to us, and in the demo we saw, this was presented as a way for you to effectively choose your own difficulty mode.

That’s potentially great news for those who want to enjoy the rich, hilarious, storied world that Obsidian is creating, even if they aren’t the biggest fan of punishing gunplay. But there’s always a danger of players taking the path of least resistance — wouldn’t every player want to invest heavily in slowing down time?

“It allows you to play it more like a tactical RPG, but we hope that all the options we give people are equally interesting,” answers McPhee.

He might be right about that. You can’t invest in all of these things in one playthrough, and the comedy/leadership options are highly tempting.

It’s great to have a game that actually adapts its gameplay to your choices, and The Outer Worlds takes this to such an extreme level as to effectively be in a different genre according to how you allocate a few attribute points. But it’s still a sci-fi RPG, with hundreds of thousands of voiceover lines recorded, and you’ll still be navigating the troubled colonies in whichever way you see fit.

Obsidian’s extensive history with branching story games really comes into play here. It’ll be up to you to support or betray any character or faction you like, right from the start all the way up to the very end. Pick a side and be loyal, be a double agent, or become that universally hated bandit that no town will welcome. It’s up to you.

“Very early on in the game you’re sort of given a goal by one of the protagonists, but very quickly you can make the decision to go against him.” McPhee tells us. “Try to turn him in, or work with the [corporate] board, or something like that. We put a lot of work into being able to go back and forth, until pretty close to the end of the game.”

On the world we saw, the main story was about two factions who dealt with the abandonment of their megacorporation differently. One tried to maintain corporate life with its hierarchies and rules, while the other embraced anarchy.

Contracted to kill a factory leader, our mark instantly tried to offer us a better deal. It quickly becomes apparent that the levels of intrigue here will lead to some highly complex dialogue and decision trees.

In this case, the offer of a lifetime supply of pig tumour meat wasn’t appealing enough, and we completed our assassination. The neverending meat supply would’ve effectively given us an unlimited food bonus, and it would’ve been more useful on the game’s Supernova mode, in which companions have permadeath and you need constant food, water, and sleep to survive.

For the masochists among us, we suppose that’s one more genre The Outer Worlds can claim to have one foot in — survival.