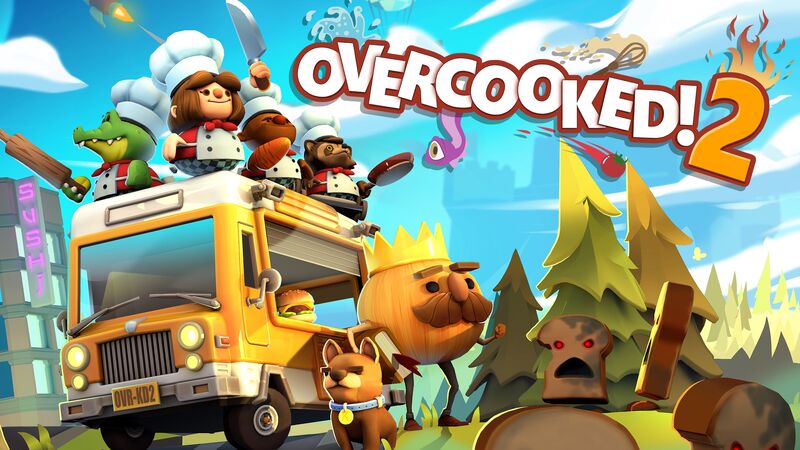 Phil Duncan and Oli De-Vine were fed up. While they spent most of their working day at Frontier Developments helping to craft brilliant games like Zoo Tycoon, they also loved to blow off steam at lunch with some expletive-filled co-op gaming. Yet during their eight years there, it wasn’t long before they had exhausted all the multiplayer classics. Frustrated, one question began repeatedly circling the duo’s mind – where are all the co-op games?

With online shooters and stat-crunching RPGs becoming all the rage, poor old couch co-op had been quietly resigned to the pages of history. If  Duncan and Oli wanted to continue their lunchtime fun, there was only one option – they’d have to make their own co-op game. So they did.

In a past life, Duncan was a chef, and for him there was only one place that embodied the glorious collision of teamwork and mayhem that is co-op gaming  –  the kitchen. Soon their ideas grew along with their grins, and in no time their little lunchtime project was suddenly all grown up. Its name?  Overcooked.

A little serving of co-op goodness

OK, now, we know what you’re thinking. “Sure, that’s a great story, but why would I want to play a video game where you chop up onions and shout at each other over the washing up?” Well, dear reader, the answer is because it’s bloody brilliant.

Overcooked went on to sell over a million copies  across four platforms and gain (completely deserved) critical acclaim. But more importantly for this writer, it introduced countless friends to gaming who would never have touched a controller otherwise. It provided laughs, arguments, and quickly became the centrepiece for more than a few drunken nights. And now, almost two years later –  its sequel, Overcooked 2 has arrived.

With a whole team now helping Duncan and Oli, needless to say, expectations were high. But with the original being such a breath of fresh air, we were surprised that our initial reaction to playing Overcooked 2 was actually one of utter disappointment.

Sure, there were new recipes to master, but couldn’t these just have been DLC? It didn’t help that those early levels were painfully easy, either. With its predecessor quickly (and brutally) slapping players into shape, we began to assume the worst.  Have we bummed you out a bit now? Well, don’t worry – because once you get to the second world, Overcooked 2 reveals its true colours.

It turns out, there’s a very good reason that things feel basic and repetitive initially. Why? Because that’s the developers’ way of slowly preparing new players for the sheer amount of mayhem the game is about to throw at you.

And, boy, does it throw everything at you. Yes, even the kitchen sink. While the drip-feed of new recipes (including sushi, pasta and steamed dumplings) start off fairly easy to master, juggling them with Overcooked 2’s increasingly deviously designed stages quickly builds into a challenging crescendo.

It’s clear that pushing players to breaking point in the most creative of ways was their devs’ mission here. Whether its one map set in a gothic kitchen where haunted ingredients periodically float away from each chef or a rage inducing level where both players have to prepare ingredients on top of a pair of floating rafts, the level design here is wonderfully insane.

Thankfully though, it’s not just the levels that have evolved here. This time around, chefs can chuck raw ingredients. Now, that may sound like an eye-rollingly dull new mechanic, but trust us – it’s an utter game changer. As well as being essential for stages split over different verticalities, the throw ability really allows for some tight-knit, pro level play. Being able to dash over a gaping chasm while chucking a tomato directly to your teammate not only feels brilliant, but it also allows you to be far more productive – helping you cook more and increase that all important end of level score.

The other menu-heading addition in Overcooked 2 is online play. The netcode seemed perfectly A-OK to us, but sadly, there’s no support for voice chat at all here. With all our Overcooked sessions dependant on yelling obscenities at each other, navigating Overcooked’s madness in silence felt strangely chilling. Still, there are a few (limited) emotes at your disposal and while it doesn’t quite beat having three friends huddle around a sofa, it’s still a lot of fun.

There are, of course, a TON of silly new chefs to choose from, too. While old favourites like wheelchair racoon and bucktooth boy make a welcome return (we’re going with those as their official names) players can now hop into the kitchen as an alligator, a bespectacled ginger maestro or either an elderly man or woman, to name but a few.

It’s worth noting that you can technically play the game in single player as well — but we wouldn’t recommend it. When cooking on your lonesome, players find themselves in control of two chefs, switching between each with a tap of either bumper. Unsurprisingly things get pretty ridiculous pretty fast, with multi-tasking as both chefs soon becoming sweat-inducing as you attempt to avoid disintegrating stages one chef at a time while chucking yourself ingredients across gaping chasms. We found later levels near impossible to do solo, so lonely offline players — be warned.

Is Overcooked 2 Any good?

There are two types of sequels, those that take the template of the original and improve upon it beyond recognition and those that just opt for the bigger and better approach. Overcooked 2 is undeniably the latter.

Yet, when you’re building on such a solid gameplay foundation, it’s hard to really ask for any more. Despite some early concerns, Overcooked 2 is an undeniably brilliant co-op experience. Thanks to some wonderfully inspired (and at times vein-poppingly frustrating) level design, Overcooked 2 is sure to bring any group friends together and make them laugh, scream and (if you chop enough virtual onions) even cry.

And really, what else could you ask for from a co-op game?