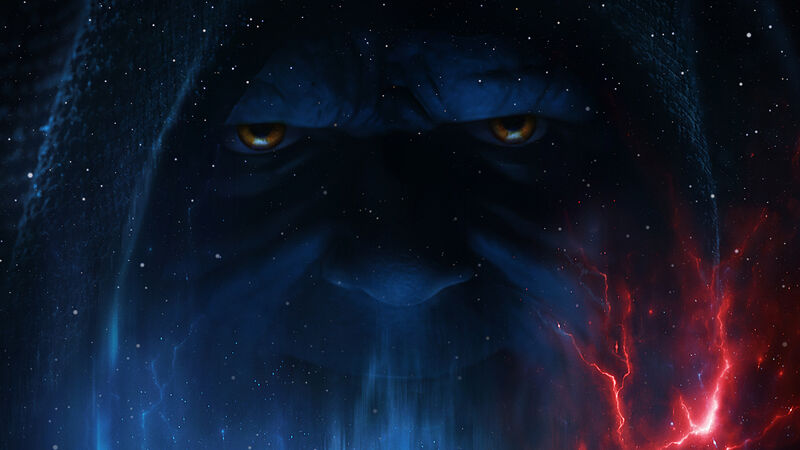 In the summer of 1991, Star Wars changed forever when Dark Horse Comics released the first installment of Dark Empire. A limited-run comic by Tom Veitch and Cam Kennedy, it was meant as a companion piece to Timothy Zahn’s popular Thrawn trilogy. Within the pages of Dark Empire, fans of a galaxy far, far away learned an astonishing fact: Emperor Palpatine had not died on the second Death Star. The Dark Lord of the Sith had mastered the art of “essence transfer,” able to migrate his energy into a new, freshly cloned body at will.

With this new plot point, Emperor Palpatine evolved from a Machiavellian tyrant with magic powers to an avatar of evil, a nigh-immortal bogeyman from which there is no escape. The most mortals could hope for would be to contain him for a time. It was the first step that would eventually lead George Lucas to the idea that the top-down view of the galaxy was one ruled by inter-dimensional beings beyond our comprehension.

All that that was swept away in 2012, when Disney acquired Lucasfilm. But Kathleen Kennedy wasn’t afraid to let her creatives rummage around in the discarded lore and breathe new life into the best parts. Hence the official canon debut of Thrawn, the reintroduction of Darth Bane, and now, with Star Wars: The Rise of Skywalker, the reconfiguring of Palpatine’s Rube Goldberg Machine of a plan to cheat death.

I AM THE SITH

For someone like me, who writes about Star Wars lore for a living, watching The Rise of Skywalker felt like a natural extension of the galaxy and satisfying homage to Dark Empire’s narrative. But I can see where there could be confusion about how we got here from people who don’t mainline every piece of content Lucasfilm churns out. But the seeds of Palpatine’s return were planted nearly as soon as the first supplemental materials of the Disney era came out, as we began to get new books, comics, and animated series that were all firmly considered canon.

In 2016, Chuck Wendig’s novel Aftermath: Life Debt had Grand Admiral Rae Sloane discover not all was as it appeared during the Battle of Endor. The Emperor’s personal super star destroyer, known as the Eclipse, had not in fact been destroyed by the Rebels. Instead, Sloane found an image of Palpatine and several trusted loyalists, one of whom was Gallius Rax. Rax would later make sure all the chosen remnants of the Empire made it to the Unknown Regions, where the Eclipse was waiting for them. It now seems very likely Palpatine was on that ship, though definitely not in great shape.

Meanwhile, the later seasons of both Star Wars: The Clone Wars and Star Wars Rebels opened doors to the most mystical parts of the Force. From Yoda’s interactions with the Force Priestesses to Ezra and Ahsoka discovering a way to step outside of time and space (and realizing Palpatine could do it too, to an extent), the Force became a lot more than the ability to Jedi Mind Trick stormtroopers.

Then there is the recent Star Wars comics implying Palpatine created Anakin Skywalker whole cloth from across the galaxy using the Force. At the time, I wondered what the purpose of such a thing could be, other than another nod to now-defunct Legends narrative — more on that in a minute. But now it appears he may have been trying to secure his legacy. If Palpatine needs a genetic match to transfer into millennia after millennia, it suddenly makes sense why he tried to goad Anakin, then Luke, then Kylo Ren and Rey into killing him in cold blood. He needed them to.

EVERYTHING OLD IS NEW AGAIN

The sheer amount of repurposed Expanded Universe stories in The Rise of Skywalker is staggering. J.J. Abrams borrowed heavily from his predecessors but tweaked everything just enough to make it feel fresh. From the planet of Exegol and its inhabitants to the difficulty in reaching the planet to the vats full of Snokes (Sneeks?), the bones of Palpatine’s old plan were still there. Even the reveal of Rey’s true parentage finds its origins in the depths of the defunct lore.

Let’s start at the beginning. Exegol. According to Star Wars: The Rise of Skywalker: The Visual Dictionary the planet in the Unknown Regions where Palpatine laid out the next phase of his infinite empire was an unknown bastion of Sith loyalists. Known as the Sith Eternal, they had waited a thousand years to once again rule over the galaxy after their ancient defeat at the hands of Jedi. The giant fissures that cover the planet were excavated by the local population as they dug deeper towards “transportative vengeance.” But if you squint at Exegol, you can see the scaffolding of Byss behind it.

In the Legends material, Byss was a planet not in the Unknown Regions., but in the Deep Core. Near the center of the galaxy, Byss was nearly impossible to reach as the sheer density of stars, along with solar winds and other strange anomalies made hyperspace jumps incredibly dangerous. However, Palpatine not only found Byss, but he also began to siphon its natural Force power for himself. He also ran a propaganda campaign within the Empire, touting Byss as a grand reward for loyalty, but instead, colonists were enslaved and set to work or drained of their life force to feed the Emperor’s insatiable desire for more power.

Moving the seat of Palpatine’s power from the Deep Core to the Unknown Regions makes sense though, considering the implications in place involving the Celestials’ disappearance from the galaxy. Looking at any galaxy map of for Star Wars shows most of civilization is on the “east” side. The western half is sparse, mostly because hyperspace travel is terrifying due to the sheer number of shifting hyperspace lanes and unmappable, moving anomalies. This is caused by what xeno-archaeologists like Doctor Aphra believe is the remnant of a galaxy-spanning “wall.” But was it keeping something in…or something out?

Other shout-outs to old ideas include the clone vats, repurposed now for the creation of multiple copies of Snoke, and the concept of the “essence transfer,” now adjusted to simply need a genetic match instead of an exact replica of the Emperor’s body. Oh, and of course now the implication is that Palpatine is truly immortal, reincarnating in an unending line since his name was Darth Bane, if not older. The repercussions there are interesting, putting the Emperor on par with Mortis Gods and making this lore nerd wonder if he isn’t some version of the Abeloth .

PALPATINE, YOU ARE THE GRANDFATHER

Then there’s the reveal that Rey is the biological granddaughter of Emperor Palpatine. Secreted away by her father — a son of the Emperor — and her mother as a child, Rey was left on Jakku to protect her from her grandfather’s machinations. Most certainly, whatever oddness drove the Emperor to Jakku in the first place is also what hid Rey from his view for all those years. And while it may appear that giving Sheev Palpatine an heir was pulled from thin air, Rey’s arc also had its origins in the depths of the Expanded Universe lore.

In Legends stories, Sly Moore, the Umbrean woman who was always seated near Palpatine during the Old Republic, was Palpatine’s lover. It is still canon that the Force-sensitive senior official was capable of manipulating the minds of the weak. She was also trusted enough to know Palpatine’s true identity as Darth Sidious long before the fall of the Republic. But some of their history that was swept away in the merger with Disney has popped up again, including Rey’s parentage.

Within the convoluted EU, Sly Moore was tasked by Palpatine to study the concept of spontaneous life. The idea was to create a Force-sensitive child merely through manipulation of the Force itself. If this sounds familiar, it’s because that’s basically the origin of Anakin Skywalker now, except without an intermediary such as Sly. But when Sly was still in the narrative, she chose herself to carry Palpatine’s child, literally impregnating herself through sheer power. That child, named Triclops, would in turn father a child with a Jedi woman. Their son’s name? Ken.

Ken and Rey share more than just a name with three letters. Ken first appeared in the Jedi Prince novels by Paul and Hollace Davids in 1997. In it, 12-year-old Ken’s story sounds very familiar. Raised in isolated seclusion, Ken was raised by a bevy of droids and thus was very fluent in speaking with them. He grew up idolizing the stories of Jedi Knight Luke Skywalker. He had no idea who his parents were or why they abandoned him and was surprised when learning to use the Force came quickly and naturally to him. It was later revealed that Ken was spirited away to safety by an unknown Jedi after his mother was murdered by agents of the Empire. Trained under Luke Skywalker, Ken came to hope the Jedi was his father, only to be devastated to discover he was the grandson of Darth Sidious. Ken struggled with the knowledge, fearful that his bloodline meant he was destined for evil, only to be reassured by Skywalker that some things are stronger than ancestry. Change “Ken” to “Rey” and you just read the description of her heritage in the films.

At the end of the day, not everyone is going to like the choices that were made in Star Wars: The Rise of Skywalker. However, for many fans of the old Expanded Universe / Legends stories, it is a truly satisfying piece of filmmaking.