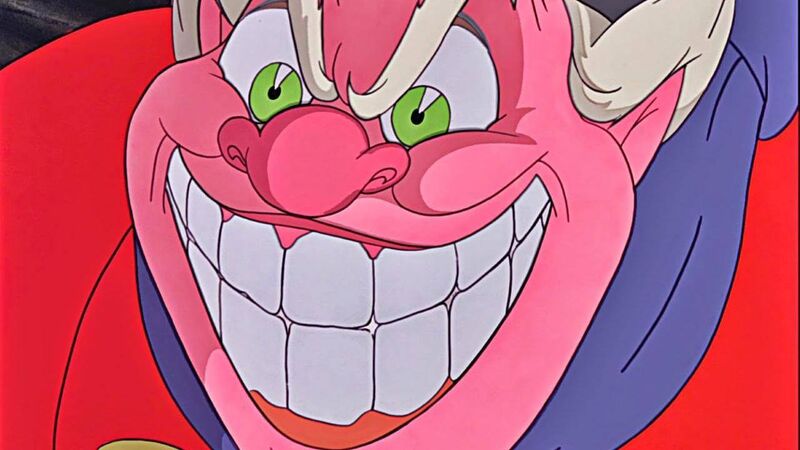 To start this feature off, we have to go to the granddaddy of them all: Disney. Though they still manage to interject some moments of unrestrained horror into their films every now and then, Disney used to be the Freddy Krueger of an entire generation of children. The death of Bambi’s mother; “Night on Bald Mountain” in Fantasia, “Pink Elephants On Parade” in Dumbo. Even Disney’s initial outing, Snow White and the Seven Dwarves is filled with frightening imagery like ghostly trees and a cackling witch.

What makes Pinocchio‘s terrors such a sucker punch is how delightful the opening of the film is. The sequences involving the “Aw shucks!” charm of Jiminy Cricket and the angelic beauty of the Blue Fairy lull the viewer into the falsest sense of security ever. Little do they know that Pinocchio’s journey will soon bring him under the ownership of the sadistic puppeteer, Stromboli.

Hapless crooks Honest John and Gideon convince Pinocchio to become an actor, and he is sold to the seemingly mirthful Stromboli. After a night of performing, Pinocchio says that he wants to go back home to his father, Geppetto. Stromboli tosses Pinocchio into a cage and laughs at the wooden boy’s misfortune. Pinocchio eventually escapes thanks to the extending power of his lie-fueled nose, but Stromboli is only the tip of Pinocchio‘s iceberg of horror.

Honest John and Gideon meet a coachman who will pay big money to take young boys to a place called Pleasure Island. Disregarding the obvious creep factor with that very setup, the coachman would be horrifying for his look alone. He starts off as a cherubic, almost W.C. Fields-esque older man:

And then, when he tells Honest John and Gideon that those who visit Pleasure Island, “never come back… as boys,” he becomes The Devil:

We haven’t even gotten to the scariest moment in the film, and this would already be a strong “9 out of 10” on the Trauma-meter. Honest John and Gideon sell Pinocchio yet again, this time as part of the coachmen’s ferry to Pleasure Island. Pinocchio meets a hooligan of a kid named Lampwick along the way, and the two sail off to Pleasure Island where they can get drunk, smoke cigars, and live a life of pure vice. However, Jiminy discovers what happens to the boys on Pleasure Island — they are transformed into braying donkeys. …Or, more appropriately, jackasses.

Pinocchio witnesses Lampwick transform right in front of his eyes, and while it starts off as something quite humorous, it ends up being soul-crushingly sad and frightening. Watch for yourself:

The part where his hands turn into hooves always sends a chill down my spine. It’s a moment that’s as gut-wrenching as David’s transformation in An American Werewolf in London or the final stage of Brundlefly‘s evolution. It’s a horror movie moment in the film that Disney takes its company’s theme song from.

And this still isn’t the scariest thing in Pinocchio. That honor belongs to Monstro.

Monstro could give Moby Dick a run for his money when it comes to being the most menacing whale in popular fiction. During Pinocchio’s long absence, Geppetto becomes worried and goes out to look for his son. Along the way, Geppetto runs afoul of Monstro and is swallowed into his belly where he must live out the rest of his days. Pinocchio finds out about this and hunts down Monstro, getting slurped up by the behemoth. Pinocchio and his father escape, but not before being chased by Monstro in one of the tensest sequences in cartoon history.

Though everything works out alright in the end — these kinds of movies almost always do — the road to that happy ending is fraught with nightmares. Disney has a reputation for crafting strong, imposing, and often fearsome villains. Pinocchio is a film that has three separate ghoulish antagonists, and it doesn’t waste a one of them. It’s a perfect primer for the kind of unknowing terror in fiction that will pop up all throughout a child’s life, and it’s an excellent example of the kind of entertainment they will fondly remember for the rest of their lives.