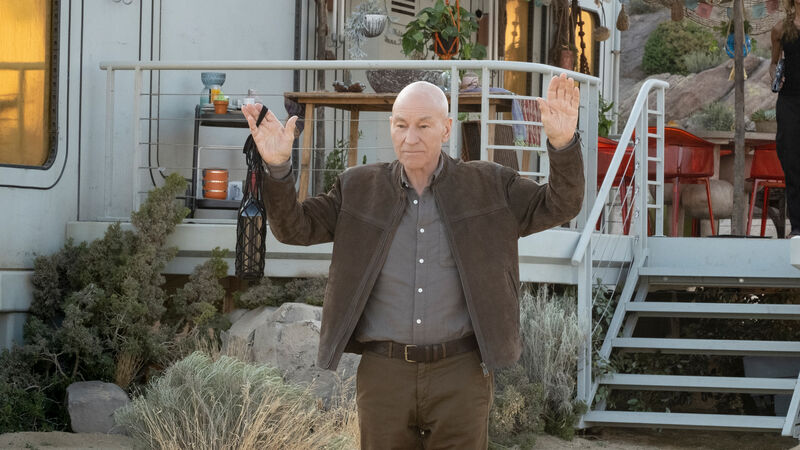 Episode Two of Star Trek: Picard, titled “Maps and Legends,” takes us a step deeper into the synthetic mysteries of the series. We discover more about the Romulan attackers, the androids on Mars and the current state of Starfleet. We get a bit more insight into Data’s daughters. “Maps and Legends” asks a lot of questions that leave us excited to see where this series is headed.

The first moments of the episode feature the Mars worker synthetics. They bear a resemblance to Data but are a little more strange. F8, the focal point of the opening sequence is robotic and his human coworkers talk about how creepy they find his kind. They openly fear and mock the synthetics. F8 appears to trigger randomly and he’s not the only one, as the planet’s defenses turn on Mars, the android turns his gun on himself.

These robotic beings make the twins even more remarkable. Data’s lineage is life, which as seen in episode one, Picard is all about. It confirms his resolve to find Dr. Bruce Maddox, the man behind the creation of the girls.

Picard’s Romulan workers Laris and Zhaban tell him of the secret Romulan force, the Zhat Vash. Only a rumour even to Romulans, Laris is convinced they must be behind the attack. She talks about their “deep unassuageable loathing” for synthetics and mission to “keep a secret so profound just learning it could break a person’s mind.” I couldn’t help but wonder why she didn’t bring up years ago. Laris’s suspicions appear confirmed by the lack of recoverable data from Dahj’s apartment. They learn Soji is not on Earth causing Picard to once again to look towards the stars.

Unfortunately, bad news comes in from his doctor and former shipmate. The abnormality in his parietal lobe – a layover from his time with the Borg revealed back in TNG – is still a threat which will not only one day kill him but could affect his cognitive ability and be responsible for his outbursts. Picard asks to be cleared for service regardless of this diagnosis, and returns to Starfleet to request a ship.

There’s a lot of distance between Picard and Starfleet in his current life. He resigned for moral reasons and isn’t recognised at reception. He’s denied a ship by Admiral Kirsten Clancy in no uncertain terms and chastised for asking. As Picard said in episode one, this isn’t Starfleet anymore, at least, it’s not his Starfleet.

Picard returns to Dr. Agnes Jerati who first informed him of Maddox’s work. As they sit for tea (Earl Grey, of course) he gives us this gem: “I never really cared for science fiction. I guess… I just didn’t get it.” which seems apt when you spend your life actually living it. Jerati explains Dahj’s life, history, and identity was crafted three years ago rather than lived. This implies there was a reason for her to be at the university and also begs the question as to why Soji is on the cube.

Brushing off suggestions to seek out his old crew (disappointing fans like myself), Picard turns to a new face, a woman named Raffi who clearly knows him and offers a hostile greeting. Picard explains about the Romulan spies which paired with wine changes her mind. Who she is remains a mystery, for now.

The biggest reveals of this episode had little to do with Picard. Starfleet is infiltrated with Romulan spies including Narek, our suspicious friend from the Romulan reclamation Borg cube. We are introduced to Narek’s sister posing as Lt Rizzo as well as Commodore Oh who’s pulling the strings. They are frazzled by Picard’s knowledge of the Zhat Vash and pressure Narek to work faster.

Narek actually seems to be working pretty quickly, as he and Soji are sleeping together. He clearly has an interest in her work and watches as she removes the implants from a former Borg of unknown race, called The Nameless. Soji expresses dislike for the name and even seems to speak their language which peaked not only Narek’s interest, but also my own.

This leaves a lot left to discover in the series, such as what exactly Soji is looking for and why the Zhat Vash have such a keen interest beyond destroying her. Who’s Raffi? When will we see old favourites like Riker, Troy, and Seven of Nine? Who were The Nameless? And can we please see Picard’s dog, Number One again?