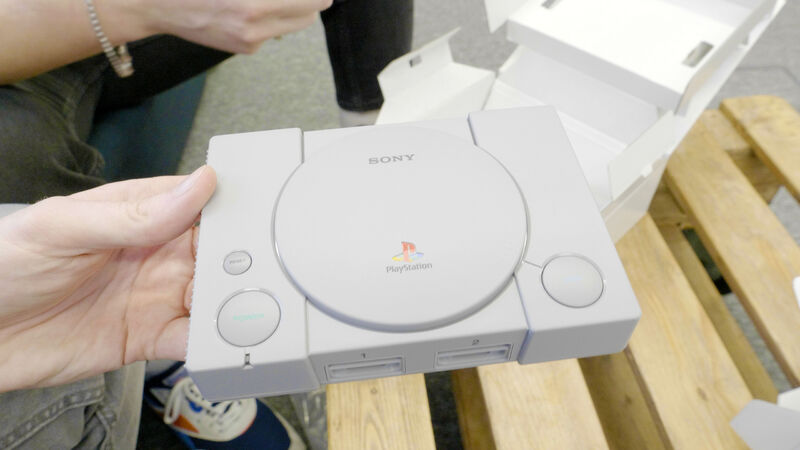 It’s easy to forget now, but originally Sony’s first ever game console was supposed to be a collaboration with Nintendo. With the big N keen to utilise Sony’s new cutting-edge CD technology, in 1988, the two Japanese giants quietly inked a deal to combine forces and release a souped-up, CD-ready SNES.

Its name?  The Nintendo Play Station.

As we all know now (aside from a handful of much-coveted prototypes) the mysterious machine never actually made it into the wild. Thanks to a bitter dispute over royalties, Nintendo decided to breakup with Sony in a very public way, waiting until Sony had already revealed the Nintendo PlayStation to announce that the Kyoto-based company would instead be shunning Sony, and releasing a console collaboration with Phillips.

Humiliated and eager to save face, Sony doubled down on the idea of making its very own ‘ PlayStation’ – and, well, the rest is history. With the ‘90s console going onto house some of the most critically acclaimed games of all time, it turns out, Sony really didn’t need the big N after all. Now though, 24 years after the PlayStation’s release, Sony is following in Nintendo’s footsteps once again. Seeing the runaway success of last year’s SNES Mini — Sony has launched its very own baby PlayStation.

Yet, with the once novel-feeling NES and SNES Mini consoles already beating Sony to the punch, can Sony’s ‘me too’ attempt at weaponised nostalgia really have the same impact?

Do Not Underestimate The Power Of PlayStation

After booting up the PlayStation Classic and being greeted with that era-defining startup jingle, any lingering skepticism is quickly washed away by a wave of sweet, sweet nostalgia. Despite the misty-eyed adoration gamers hold for Nintendo’s SNES-era output, it’s easy to forget just how phenomenal the PS1’s library really was.

Loaded with a selection of 20 games, Sony has sensibly cherry-picked an impressively diverse library of titles that highlight what the PlayStation did best —  making video games feel cool. Diving into a game of Tekken 3, we’re pleasantly surprised to find that we’re still just as enraptured with the blocky beat ‘em up as we were back in 1998. Thanks to a great soundtrack and that (now iconic) wonderful, weighty combat, we found ourselves losing more hours than we’d care to admit to the game’s VS and Team Battle modes. Why? Because playing Tekken 3 is an experience that, despite its increasingly pixelated exterior, still somehow feels effortlessly cool. It’s a game that’s unapologetically ’90s in its presentation but instead of this aging the experience horribly, Tekken 3 is actually all the better for it.  offering the perfect marriage of compelling characters and ‘badas’’ brawling that, while simplistic still feels incredibly satisfying.

Ironically, it’s PlayStation’s willingness to embrace the 90s that seems to have helped these experiences age so well. Where SNES and N64-era Nintendo was still concerned with making ‘timeless’  gaming experiences, Sony was far more comfortable in championing games that embraced the era that gamers found themselves in.

In the same way that ’80s fims have a certain charm to them, most of the games on offer here unapologetically ooze ’90s cool. It’s why Hideo Kojima’s Metal Gear Solid still feels completely enthralling today. Featuring a gritty setting and uniquely Hollywood-esque approach to its storytelling,  Snake’s first 3D outing still resolutely stands the test of time. Sure, its fiddly control scheme is woefully outdated now, but ultimately, in terms of presentation and scope, it’s still an experience that seems far ahead of its time. The same can be said for Abe’s Odyssey, Final Fantasy VII , Resident Evil: Director’s Cut and a wealth of other games on the system.

Some games, however, haven’t aged so gracefully. While Tony Hawk’s Pro Skater 3 still feels fun to play today, bizarrely, it didn’t make the cut here. Instead, we’re left with Cool Boarders 2, which now, feels jaw-droppingly clunky. Thanks to the lack of analogue sticks, attempting to wrestle with the camera in the ancient FPS classic, Tom Clancy’s Rainbow’s Six feels downright archaic, too. Yet, with such a diverse collection of single and multiplayer experiences on offer here, it’s hard to care too much about the few stinkers here.

While there’s not really a “new” offering here like with the SNES Mini’s Star Fox 2, including PS1 puzzle rarity Intelligent Qube (which regularly sells on eBay for $50) makes this a bit of a no-brainer for collectors.

Tech wise, the PlayStation Classic is pretty much identikit to Nintendo’s recent retro offerings. Coming with two controllers, this mini gaming machine simply needs a Micro-USB cable and an HDMI cable and you’re good to go. It’s a stupendously portable little gaming console, too,  with Sony’s festive offering weighing in at just a quarter of the size of its full-fat 1998 counterpart.

Like with the NES and SNES Mini before it, Sony has also opted to save the consumer cash and use wired controllers. Once again though, the wire length isn’t  very generous, with these controllers actually having shorter cables than the SNES Mini. Cable length isn’t the only point Sony’s emulation machine  concedes to Nintendo either, with the overall build quality of the PlayStation Classic feeling far less premium than Nintendo’s Mini range.

While it’s still perfectly serviceable, Sony’s offering is far cheaper to the touch than the SNES Mini, with both the controllers and the console itself feeling rather cheap and plastic-y – lacking the satisfying heft of the SNES Mini.

Software-wise, the unit does the job. But once again, the overall OS and UI on offer here simply doesn’t feel as sleek as what consumers got with the SNES mini. It’s ironic then, that despite the lower build quality, the PlayStation Classic commands a higher price tag. While the SNES Mini retails for $79.99/£69.99, the PlayStation Classic veers far closer to the 100 mark, costing $99.99/£89.99.

Is the PlayStation Classic Any Good?

For hardcore gamers, there are undoubtedly countless ways to play any of these games on other systems. Yet, for someone who wants a portable way to spread nostalgic joy, the PlayStation Classic really is hard to beat.

Sure, it’s a little cheap feeling to the touch and there’s a fairly solid argument for the fact that this little retro box does little more than the bare minimum. But ultimately, when the games are still this much fun to play, it’s hard to imagine anyone coming away from Sony’s first mini console without a massive grin on their face.