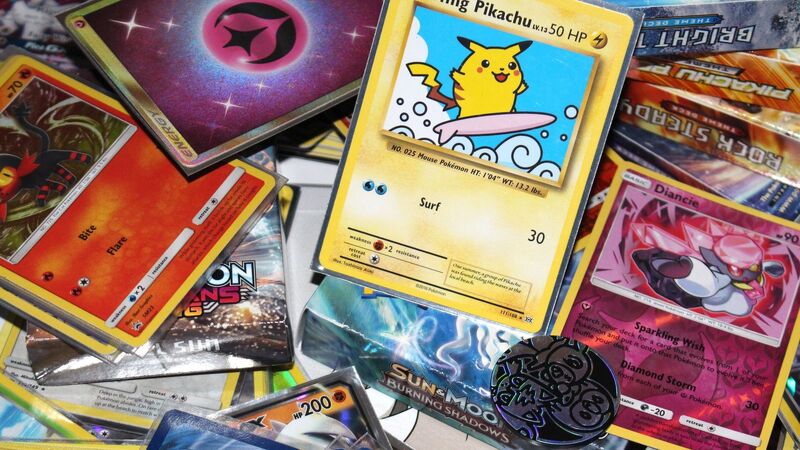 The best Pokémon cards are those that act like small comics – tiny, three-or four-panel narratives that succinctly communicate all the best things about Pokémon in one go. The world that Pokémon exist in is just as important as the creatures themselves, and small self-contained stories that flesh out world are as vital to the fantasy as any of the games, anime or manga.

Produced by long-time Pokémon collaborators, Creatures Inc, the Pokémon trading card game – or TCG – has been a vital pillar of the Pokémon world since the Japanese phenomenon launched back in 1996. Though the card game’s popularity dwindled the quickest compared to the games and the anime, it’s still a huge part of any Pokémon community and, in my opinion, still does some of the best work in making the Pokémon world feel real.

Take the line Charmander of evolutions below – it’s a perfect example of what Pokémon cards can do to weave this idea of a living, breathing world into a three-panel comic. A young Trainer adopts a mischievous Charmander that effectively bullies him, stealing his glasses and being a nuisance. Sure, the card says the lil’ charred salamander is ‘Playful’, but the expression on the kid’s face would suggest otherwise.

The next stage in the series shows an adolescent Trainer, now teaming up with his Chameleon. The two are helping each other, sat in a tree and learning about the world as they mature. The Charmeleon offers to ‘Call for Support’ – it’s atoning for its past, redeeming itself. By the time it reaches its full potential, Charizard, it’s right there with its Trainer in the snowy bluffs of (we assume) Kanto, shielding its Trainer and long-time friend from the elements.

Charizard can ‘Recall’, as per the mechanics of the game, using attacks from its previous evolutions as its move this turn. It’ll still ‘Call for Support’, it’s still ‘Playful’ – but it’s also this pseudo-mythical dragon fuelled by loyalty and honour.

That whole narrative right there… to me, that’s Pokémon in its purest form: a short, sweet redemption arc that communicates themes of personal growth, friendship through adversity, dedication.

Enriching the world of Pokémon — one tiny card at a time

“Because Pokémon card illustrations are drawn by various artists and they depict the day-to-day world that can’t been seen in the video game, they enrich and broaden the world of Pokémon,” explains the artist behind the X/Y Charmander line, Akira Komayama. “Each time, I am striving to provide better illustrations as one of them.”

The artists on Pokémon cards are freelancers – generally speaking, The Pokémon Company will come up with the function and mechanic of the card, then give an outline of what it wants to achieve to the artists who are left to work their magic.

“If there are no specific instructions at the time of the request, I try to imagine a scene after confirming the Pokémon’s habitat and its nature of the species as a reference,” explains another illustrator, Naoyo Kimura. “Sometimes I can come up with a scene by moving images around in my head, or I may wait for the story to come to mind as I draw the Pokémon.”

Taking a look at some of Kimura-san’s art above, you can see how this process brings to life any given Pokémon region. The various countries and continents in the Pokémon world are heavily themed – whether they’re based on one of Japan’s islands, Hawaii, Britain, France, the US or anywhere else besides, a Pokémon’s habitat just as important as their appearance since the conception of the franchise.

“[When coming up with an idea for a card], I first check the ecology and habits of the Pokémon and imagine the life in the wild,” explains Komayama. “Then I draw illustrations with the location and situations that bring the Pokémon to life. I prefer to draw something calm and heart-warming in the day-to-day life of Pokémon.”

Currently, there are 890 Pokémon and over 11,000 cards exist depicting them, their Trainers, supporting characters, and areas and items that exist in the lore. There’s a veritable army of freelance illustrators behind this catalogue of cards, and that’s why Creatures Inc’s TCG has such a dense and inspired personality. Each artist can bring their own flair, their own creativity, to the universe as they build on pre-defined ideas of what each Pokémon or character should be.

“I think [Pokémon cards] are a great way of communicating the Pokémon world,” Kimura-san explains. “I don’t only want to communicate the Pokémon world to people, but I’d like to think that my creating art is also an opportunity for each viewer to expand their imagination.”

Perhaps you’ve played the most recent games – Pokémon Sword & Shield, set in a country analogous to Britain – and you’re intrigued by the harbour town of Stow-on-Side, or you’ve become smitten with the new ice-headed penguin Pokémon, Eiscue. Picking up sets of the newest TCG expansion when it launches in February next year might be the best way for you to round out your perception of these areas, of giving you more context about your favourite creatures.

“I’m sure the way we approach card illustrations varies depending on the artist, but because we are all drawing the world in which Pokémon live, it may be inevitably necessary to cut out and draw the story that is born in that world,” explains Kimura-san.

This personal affinity for cards isn’t exclusive to TCG players or your more general PokéFan. Though it’s not one of my favourite ‘mon, this Tepig has stayed with me ever since I pulled it in a booster pack from the Sun & Moon series. The watercolour effect on it, its lil’ head propped up on a pillow, its cosy vibe… something about it appealed to me on a pretty personal level (maybe I just identify with cosy pigs).

Cramming a compelling world into a tiny box

Even the artists have their own favourite Pokémon cards – defined by how the individual creatures fit into the world, or chosen because of a striking and specific emotion they portray. Though, perhaps because they’re looking at the art through a creator’s lens, these favourites become difficult to pick.

“When it comes to individual cards, it’s difficult to choose,” admits Kimura-san. “Pokémon cards display a wide range of artist personalities, so each card has something nice to think about. In particular, though, I really like Yuka Morii’s work because you can feel her affection for each Pokémon.”

Morii typically makes little models of Pokémon that exist in real-world locations, giving us yet another artistic interpretation of these creatures and their natural habitats. Soft textures set against the plastic anime aesthetic of her models contextualises the Pokémon really well – it’s no surprise she often gets the commissions for small, Bug-Type Pokémon, then.

Komayama-san enjoys the freedom the artists get when it comes to trying to communicate each and every Pokémon’s individual personality. “I believe that is the strength of the most appealing and attractive Pokémon cards comes when there are no detailed specifications, [when] the artist’s own take of the Pokémon world is born because his/her personality is fully utilised.”

With that in mind, Komayama-san tells us about her card that she worked on: a ‘very handsome Basculin’. Despite many Pokémon TCG players loving her work on multi-card stories like the one at the top of this story, Komayama-san herself actually prefers the standalone images – at least when it comes to creating the art.

“It’s rare, but we get asked to draw a story tailored series. Unlike a single illustration, I’m troubled with composition and situations,” she admits. “But when all the illustrations are complete, I do feel very good.”

We don’t often get to hear the perspective of Pokémon card artists on their work – but this insight into their process and their interpretation of the work they do has given me a far deeper appreciation of the nuance required to make something for the TCG. Imagine: you get given a brief to make a new card for Snorlax – a big player (pun intended) of Sword & Shield.

Ol’ sleepyhead has been around since 1996. Coming up with a new interpretation of a big, sleepy mountain bear and making that exciting and appealing for years over two decades later… that’s a tall order. Yet the creativity, the consistency and the humility with which the artists commit to every expansion never falters.

Like that Charmander line I mentioned earlier, that combination of dedication, evolution and unity is a perfect summary of the Pokémon fantasy – and it’s something that can be found in the cards and the in the people that make them.

Don’t sleep on the Pokémon TCG – it has some of the best little stories you’ll find anywhere in the Pokémon universe.