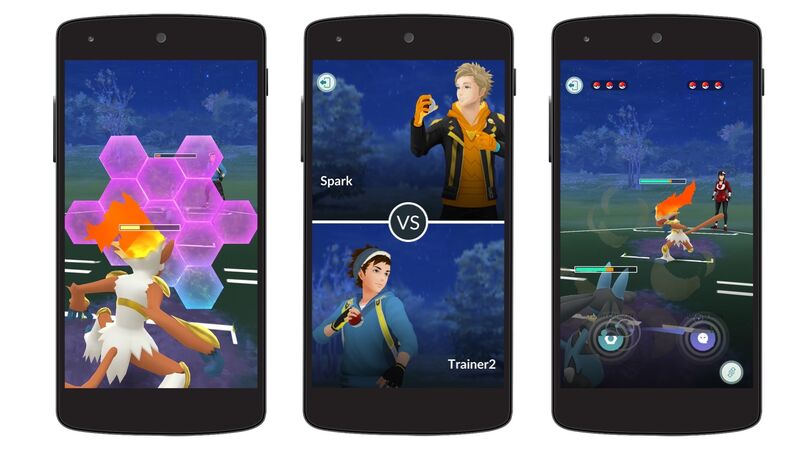 After two years without true PVP, Niantic has finally confirmed that trainer V trainer battles are coming to Pokémon GO. While the developer still hasn’t announced an exact date for the much anticipated new feature – stating only that it will arrive “soon”– we were lucky enough to test out these new real-time Pokémon GO battles. Unsurprisingly, what we played felt slick and suitably fast-paced, but with the game no longer the inescapable phenomenon it once was, is this too little too late for most players?

Even if it is, it’s hard to deny its appeal. Functioning much like the existing gym battles, PVP in Pokémon GO will see players picking teams of three and sending them into battle. Interestingly though, Niantic has opted to add in some new mechanics that keep PVP battles feeling a bit more nuanced and competitive than what’s come before.

As we sent a team of pre-selected ‘mon to duke it out against another (now rival) journalist, we found that Pokémon GO’s take on trainer battles felt surprisingly speedy. As that nostalgia-soaked Pokemon battle music began to play, it was only a matter of seconds before we were charging into the fray. Armed with an extra charge attack and a ‘protect shield’, the crux of the battle saw us frantically tapping the attack button in order to build up deadly charge attacks and unleash them on our target before they could use theirs.

As always in the world of Pokémon, getting the right type match-ups are key to victory, but thanks to the addition of the new protect shields, players get the occasional opportunity to save their ‘mon from otherwise devastating attacks. While we had a few connection issues with this very early build, otherwise, what we saw of PVP offered simplistic but satisfying fun. In other words, so far, player PVP functions exactly how you’d expect it to.

So, how do you battle other trainers?

At the moment, battles are only 1 V 1 — and you’ll be able to initiate a battle with local players by scanning their QR codes, or by challenging friends anywhere, as long as they’re on your friend list.

“The two matchmaking methods we’re supporting right now are the QR code and the friend battle methods,  but we are looking into supporting more methods in the future,” explains Pokémon GO product manager Matt Slemon. “The important part for us is that we always retain the feel that this is Pokémon GO, so that [battles aren’t] a sit down and play feature. In the future, we can look at ways of drawing inspiration from classic Pokemon mechanics like double battles, triple battles etc.”

With Pokémon GO‘s servers taking a hammering with every new feature, Niantic is, unsurprisingly, choosing to load out the feature strategically. “It’ll be level gated piece by piece as we make sure that both the servers can handle both the number of trainers that are playing and the frequency that those players are playing.”

As well as being able to battle other trainers, new players will be able to better their team leader. Battling a team leader will offer up one reward a day, with trainer battles offering up three. In the battles we played, players were rewarded with the much sought after Sinnoh stone, but obviously these tantalising rewards will vary.

“The primary reward for doing battles is stardust, stardust was always intended to be a mechanic that allows you to power up Pokémon and to make it feel like your Pokémon were growing, so it seemed like the perfect fit for a Pokémon battle system.”

When it comes to leagues, there are three main leagues available: Great League, Ultra League and Master League. The leagues will be restricted to 1,500 CP, 2,500 CP and no CP restriction respectively.

Interestingly though, Niantic doesn’t see these as a straight ‘easy’ ‘medium’ and ‘hard’ progression. When it comes to trainer V trainer battles, a basic tournament infrastructure will allow players to test different teams of ‘mon in each league, with each league having its own veteran badges as unlockable rewards.

“As far as different difficulty levels, yes higher tiers of difficulty will have better rewards for the AI battles but as far as trainer battles are concerned, we sort of want trainers to be thinking of these three leagues as equals. Similarly to many other Pokémon games each battle format sort of has its strategies to master and its own teams to build. So the types of teams you’ll be looking at building to be good in Great league are going to be very different teams to the ones that you might want to curate for Ultra league or Master League.”

“Players shouldn’t go in thinking that you know Great League is the baby steps, Ultra league is like where you kind of understanding what you’re doing and Master League is where the real action is. By no means are we balancing like that as the case. We are trying to ensure that all three of these leagues are fully tenable. We think the real fun in Pokémon always comes down to what teams can I build? And by introducing a league system like this, we think it really highlights the strengths of people who want to get good at building different types of teams. We know that having no restrictions at all means the sandbox very quickly curates down to a very small few set of Pokémon. So this gives players an opportunity both to use their biggest hard hitters in Master League while having to think really tactically about tight matchups in Great League.”

Why has PVP taken so long, and what’s next?

With PVP Pokémon GO battles seeming pretty basic so far, what took Niantic so long to implement the feature? “We wanted the gameplay to feel like it really fit the world of Pokémon GO,” explains Slemon. “Many of us on the team are huge main series Pokémon fans and some of us are even competitive main series battlers, but through iteration, we found the most success and the most fun, focusing on mechanics that fit well with the on-the-move philosophy of Pokémon GO.”

With the mainline game’s parties of six leading to constant Pokémon swapping and dragging the battles out, Niantic found that the old format simply didn’t suit the fast-paced, on-the-move nature of Pokémon GO. “Trainers shouldn’t need to block out 15 to 20 minutes to sit down and make enough time to finish a battle.”

Interestingly though, Slemon confirms that while 1 V 1 battles are the focus for now, with group battles and more complex elements from the mainline game making their way into the game in the future. “More complex mechanics will arrive in trainer battles over time, many inspired by the original Pokémon games. I think the important part is the framework, so to speak, of what Pokémon GO battles are which is alternating between fast and charge attacks. And if you take that as a foundational piece of the game design, there’s all kinds of things we can do with that. But in the future you can expect to see additional mechanics, most likely derived from a beloved version in the main series, whether its statuses, buffs, debuffs etc.”

With the classic Pokémon games and anime series pitting trainer against trainer from day one, Pokémon GO fans have been desperate to test their squad against their rivals in real time. And thanks to the tease of group battles and more complex battle mechanics, PVP battling could finally turn Pokémon GO into the AR MMO many have always wanted it to be.