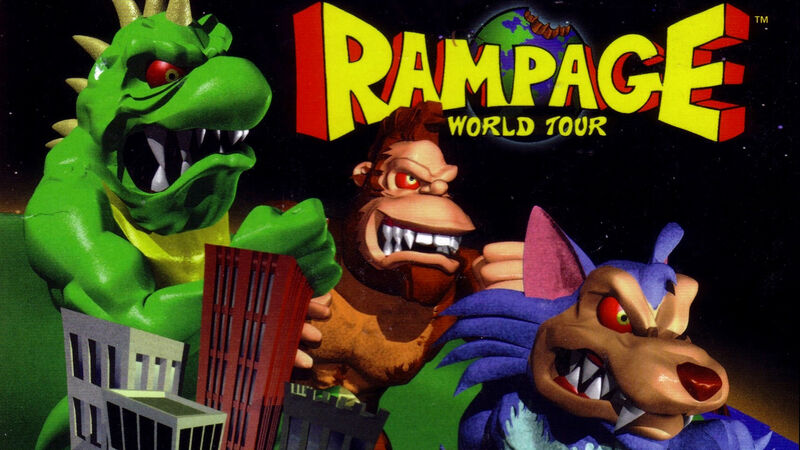 ‘Rampage’: All About the Game That Inspired Dwayne Johnson’s New Monster Movie

Dwayne Johnson has a bonkers creature feature hitting screens next month in the shape of Rampage. A monster mash that revolves around giant animals reducing a city to rubble, the film is loosely based on the classic arcade game of the same name. But aside from beasts bashing buildings, the similarities look to be few and far between.

What is the Rampage Game?

Clearly inspired by King Kong, Rampage concerns three gigantic creatures laying waste to a series of cities. The twist being that each of the monsters used to be human.

George was turned into a giant ape by an experimental vitamin, Ralph was transformed into a huge werewolf by a food additive, and a radioactive lake turned Lizzie into a giant lizard.

Players control one of the three characters, with the aim to smash each city to smithereens to advance to the next level. The monsters can climb the buildings and punch windows, cars, tanks, boats, planes and helicopters.

Damage comes in the shape of bullets, dynamite, cigarettes, falls, and monster brawls; the latter all too common when playing against your friends. Though that damage can be undone by eating food items like roast chicken. And people. Especially those waving for help.

Serious injury results in the monsters reverting to human form, however. And edging off the screen naked, with only their hands to cover their privates. Effectively ending the game.

Rampage first hit arcades in 1986, courtesy of Bally Midway. A huge hit, the game was ported to a series of Atari systems as well as the Spectrum, Amstrad, Commodore and Amiga, NES, Sega Master System, and Nintendo 64.

The Atari Lynx version added a fourth monster in the shape of a giant rat named Larry. Who worked in the cafe of a chemical lab. And turned rodent after eating contaminated spinach.

In the 2015 LEGO Dimensions game, ‘Rampage City’ is found in the Midway Arcade World. It shows the aftermath of a game of Rampage, with the city pretty much destroyed. It’s here that Gamer Kid briefly turns into George the Gorilla.

It’s also thought that Ralph in Wreck-it-Ralph is based on Ralph the werewolf, as their building-bashing activities are pretty similar.

How the Rampage Movie Differs to the Game

Based on the film’s trailer and official synopsis, it seems that the Rampage movie does away with the conceit of humans turning into monsters, replacing it with animals turning into much bigger animals.

Dwayne Johnson plays primatologist Davis Okoye, who likes hanging out with animals more than people, and whose best friend is a silverback gorilla called George.

A mysterious gas genetically transforms George however, causing him to grow at an alarming rate, with increased strength, speed and agility. The same transformation happens in both a wolf and a crocodile, with all three wreaking havoc on the city of Chicago. Especially the wolf, who can fly.

It’s left to Okoye to stop the beasties from laying waste to North America, while also finding a cure for George. Who Okoye says — with a straight face — isn’t just a friend, “he’s family.”

Which all sounds gloriously silly. Though if the film doesn’t feature Dwayne getting naked and slowly edging offscreen, we want our money back.