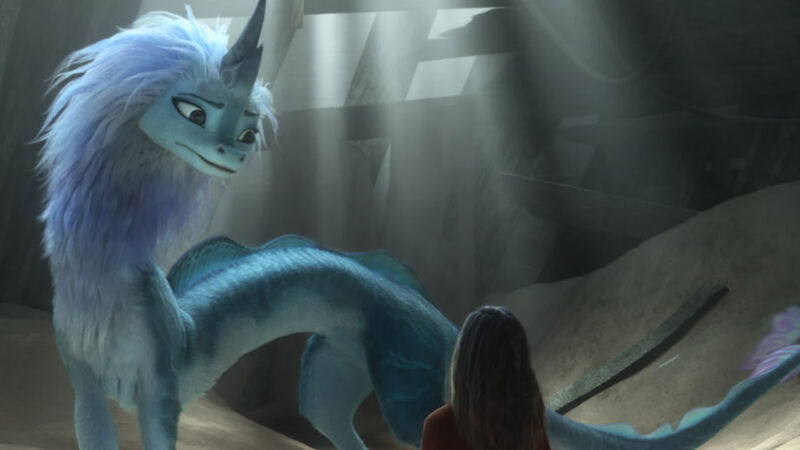 A new trailer for Raya and the Last Dragon has debuted, giving us our best look yet at the newest Disney animated film and the dragon of its title – and a glimpse at some of her many impressive abilities.

That dragon is Sisu, voiced by Awkwafina, who is sought out by the title character, Raya (voiced by Kelly Marie Tran) to help save her world, Kumandra, from the same evil that led to all of the other dragons sacrificing themselves 500 years before.

After viewing about 30 minutes of footage from the film – which contains some truly gorgeous imagery and visuals unlike those typically found in Disney animated films — Fandom spoke to some of the key creators of Raya and the Last Dragon about their depiction of Sisu and how they sought to make her very different from dragons you might have seen in stories like Game of Thrones, Harry Potter, or The Hobbit.

When it came to figuring out their dragon, Don Hall (Big Hero 6, Moana), who directed Raya with Carlos López Estrada, said, “It took a little finessing to get the right mix, because in Southeast Asia, what we’re inspired by is the mythology of Nagas, which are a very specific type of dragon and they’re revered as almost deities. What we found is that that was going to give us a very unique take, knowing that there’s a lot of dragons in movies. Doubling down on the cultural inspirations like the Naga really helped give us something unique that we felt like audiences hadn’t seen.”

As for Sisu’s personality, Hall explained, “In terms of finding the right balance, because of their almost divine status, we wanted Sisu to have that wisdom of the ages but also give her a naivety and maybe even a little glimmer of self-doubt. We wanted the character to be fun and funny — obviously we have Awkwafina doing the voice — to make sure we could have enough meat for Awkwafina to dig into and so it was an interesting mix.”

Hall had high praise for the films writers, Qui Nguyen and Adele Lim, saying, “I have to give Qui and Adele credit because it’s gotta be on the page and they really found a way to weave all that in there but make it specific to Awkwafina.”

Producer Osnat Shurer (Moana) described figuring out their take on a dragon as “an evolutionary process,” noting that the dragons in parts of Southeast Asia, “are related to water, to life, to the flow, to harmony, and so we wanted them to represent that to the humans in the movie. Our whole mythology is based on humans relationship with dragons but we also knew we wanted to take them away in the bulk of the story, so that the humans take the journey that they have to take.”

As they constructed the history of the humans and dragons, the backstory regarding where all the dragons went, and what motivates Raya (as seen in the trailer, the film opens with a younger version of the character), Shurer said they found themselves pondering, “How do you [include] what happened 500 years ago, then what happened 6 years ago, then what happens today? How do you, story structure-wise, find that and out how much of the mythology you can tell? How much history do I wanna hear before the movie starts and the story orbits into action? All those were things that we worked through a lot in the creative storytelling room.”

As the story progresses, Sisu begins to gain additional abilities that her fellow dragons have used in the past. Explained writer Qui Nguyen (The Society), “It was interesting because we were pulling from and being inspired by the actual legends of the Naga dragons which have — for lack of a better term — a different power set than say a Western dragon, which are often seen as monsters or gatekeepers. Eastern dragons tend to be more divine, there’s a bit of divinity to it, and so it’s separating out those powers. When Sisu pops into the movie, she’s, for all intents and purposes, a giant fuzzy animal that has the same powers that Raya does and she’s working throughout the movie to gain back the strengths that one of the more traditional, divine Naga would have.”

As seen in the new trailer, that includes Sisu gaining the ability to disguise herself in human form and Hall noted, “Even specific [abilities] like shape shifting and the ability to take a human form, that is very rooted in the mythology of the Nagas in Southeast Asia and it was just about finding the right way to weave that into the story because obviously that’s cool – we haven’t seen that before. We wanted to embrace that. Also, storywise, it gave Sisu a perspective on human beings because she was experiencing the world through a human beings size, not a dragon size, for a chunk of the story and it shakes her up a little bit and gives her a unique perspective.”

Writer Adele Lim (Crazy Rich Asians) revealed Sisu didn’t always show off so many abilities, recalling, “That was a later evolution. We had versions of it where she just got stronger, but it adheres to really the bigger theme of our movie, which is we are stronger together than apart and that it’s not the efforts of one single person or one single dragon that’s really going to save the world.”

Sisu isn’t just gaining power, she’s gaining power that her dragon siblings possessed, and Lim elaborated, “What you learn is that it’s not the efforts of one single dragon, it is a collective power. With Raya’s journey, she starts it off thinking that dragons are these awesome, mystical beings that are gonna come, and boom, all the bad things go away, but it’s not that simple. When she meets Sisu she subverts expectations that she’s in fact kind of a vulnerable dragon with some self-doubt and is goofy and unpredictable but really there is a deeper wisdom to Sisu.”

THE WORLD ACCORDING TO SISU

When it came to Sisu’s place in the story, Lim noted, “She’s not there to lay waste at your enemies, she’s there to sort of remind you what it’s like to have joy in your life and have other people in your life, and companionship. She’s this creature that insists on seeing the best in people even though they betray us, even though they let us down, even though they seem to be total criminals on the outside. But there is something about them that answers to that confined spark in you, and that’s what she brings to Raya.”

Lim added, “Beyond that, honestly, growing up in Southeast Asia I’m so excited for a different kind of dragon to be introduced to the world. You haven’t seen it all yet, but buckle up… Just the way the dragons move through the water, and seeing this dragon in our Kumandra, it’s mind-blowing.

Raya and the Last Dragon will be released in theaters and on Disney+ with Premier Access on March 5.