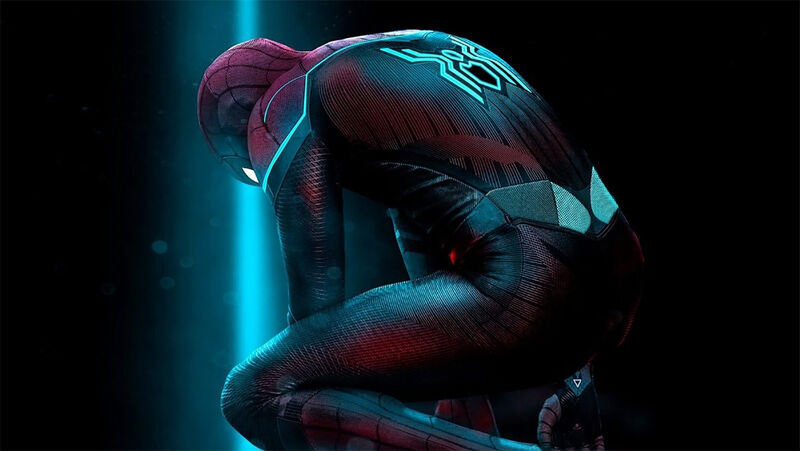 How Much Would a Real-Life Spider-Man Super-Suit Cost?

Have you ever wondered what it’d be like to be Spider-Man? Swinging through your neighbourhood, fighting crime, rescuing citizens from burning buildings, exchanging quips with ludicrously costumed villains? Sure you have, it’s a dream we all share. However, have you ever wondered what it’d cost to be Spider-Man? Like, how much one of the extremely limited edition Peter Parker x Tony Stark Spider-Man suits would set you back? What, you don’t factor budgetary estimations into your crime-fighting fantasies?

We asked Tom Holland how much he thought an IRL Spider-Man suit would set him back.

He’s not wrong, either. With Spider-Man: Far From Home, we decided to estimate the price of a fully functional Spider-Man super-suit with all mod cons – the kind that’ll make Iron Man look like a Comic-Con cosplayer. Get your credit card ready!

Disney+ is the only place to stream your favorites from Marvel and more. Watch now!

Spider-Man’s super-suit has to be as tough as diamond, but also flexible and light – because you can’t swing effortlessly from building to building wearing a suit of armour. The strongest material currently known to man is graphene, a tightly-bonded compression of carbon atoms that’s approximately one million times thinner than a piece of paper – two overlaid layers of graphene, forming a material called diamene, could stop a bullet. You can keep your bulky Kevlar body-vests, they’re basically an invitation to get shot.

Graphene isn’t 100% wearable by itself, so it’d need to be bonded with a more flexible high-tensile material, perhaps something like Dyneema, a high-performance polythene fiber blend used for boat sails that’s lighter than water. The good news is that the Dyneema is only going to cost you around $20 per square metre. The bad news is the graphene has a price tag of half a million bucks per 10kg. By our estimates, you’d need around 25kg of the good stuff to fashion a suit, or 50kg if you want the double-strength diamene edition. So you’re already looking at $2.5 million before you’ve even busted out your scissors.

The best option would be to use natural spider silk, which is the most powerful biological substance on Earth. Unfortunately, you’re going to have to fork out a quite considerable wodge of cash in order to bulk-buy natural spider silk, unless you fancy creating and running your very own spider-milking factory, which sounds like a logistical nightmare at best and an actual waking nightmare at worst.

Help is at hand, because the clever bunch at German technology company AMSilk are among the first to mass-produce spider silk for commercial use. “If someone ordered 1 tonne, we could make it,” says managing director Axel Leimer, who seems to be the only game in town when it comes to arachnid wrangling.

“It’s a double-digit million-dollar market for spider silk,” he says. AMSilk absolutely sounds like the kind of high-end technology company that could theoretically misplace a radioactive spider.

On that basis, and using the reasonable assumption that no single business could survive with one high-roller customer alone, let’s split the difference and say that for $5 million, you could score yourself a shipment of one tonne of spider silk, fresh from a spider’s butt direct to your wrist. Just remember it’s costing you about $10,000 for every thwip, so no using it to grab the TV remote from across the room.

Fantasy: a smooth-talking AI possesses the sum of all human knowledge and uses it to make sarcastic comments in your ear while you fight crime together. Reality: “Siri, call Mom… Siri, call ‘Mom’. SIRI, CALL M-ah nuts to this, I’ll just dial manually.” Mass-market artificial intelligence still has a long way to go, but behind closed doors at least, supportive AI has come on leaps and bounds in recent years.

Google Brain, for example, is a terrifyingly advanced artificial intelligence that was capable of creating its own encryption type from scratch, while Google Translate is technically capable of creating new languages to translate things it was never taught in the first place. There are various AI that can beat your ass at chess or other games, but having the answers to Jeopardy! isn’t really going to be much help when you’re up to your neck in super-villains, is it?

As of 2019, the best AI buddy you’re going to get is the Honda intelligence system that powers ASIMO (Advanced Step in Innovative Mobility), the humanoid robot. It’s capable of recognising its own environment, interpreting body language, gestures, sounds and faces, and it has multiple cameras to help determine distance and direction and laser sensors for precision. One of these little fellas is going to cost you another $2.5 million so you’d better hope you have a billionaire playboy philanthropist bankrolling you like Spidey did. Crack open ASIMO’s head to bypass its Training Wheels program and hope to God it wasn’t programmed with an Instant Kill mode.

Spidey’s iconic under-arm gliders might look a bit old-school, but they help Spider-Man remain lighter than air. If you want the authentic experience then maybe get back on the blower to the spider guys to see what they’ll quote you, but you might be better off just forking out for a top-of-the-range wingsuit, the kind those thrill-seeking maniacs who jump off mountains use. That’s going to cost you around $5k for a top-end suit including parachute, because you are not actually Spider-Man and may actually die if you jump off anything higher than a park bench.

There’s no point wearing a bleeding-edge tech-savvy super-suit if you’re not going to have a super-cool screen that overlays all sorts of funky info onto your field of vision. The AR HUD (augmented reality heads up display) is now commonplace in top of the range cars, but for the latest and greatest application of technology, look no further than the military.

The US Army recently signed a $480m contract with none other than Microsoft to supply 100,000 AR headsets for use in the field. The HoloLens headsets, which would include thermal sensing and night vision, are already being shipped out to soldiers. “Augmented reality technology will provide troops with more and better information to make decisions,” said a Microsoft spokesperson who has apparently never used Bing.

So, for just one headset, you’re looking somewhere in the region of $4.8 million – maybe they’ll chuck in a $5 case to keep it in, just in case you sit on it by accident.

It doesn’t matter how shiny and expensive your HUD display is, you still can’t see around corners. You need a drone companion to help you see the unseeable and reach the unreachable, and you need a smart one that doesn’t require you to be glued to a remote control like an amateur R/C helicopter pilot on a drizzly Sunday afternoon.

A high-end unmanned drone will cost somewhere in the region of $250k, give or take a few pennies, although even a quarter of a million dollars doesn’t buy you stealth or silence – these drones are extremely conspicuous and have a decibel level akin to a small passenger jet. If you want a drone that’s compact and quiet, you need military tech, but that’s when your costs start skyrocketing into the hundreds of millions of dollars. We’re not made of money, you know.

The Voice of Jennifer Connelly

If you want the authentic Karen/Suit Lady AI experience, then you need the dulcet tones of actress Jennifer Connelly in your ear, à la Spider-Man: Homecoming. There’s no salary information from that movie publicly available, but an actress of Connelly’s standing could expect to be paid around $500,000 for her time. That’s a bargain really, as you’d have to have her feasibly read the entire dictionary as opposed to a single movie script. Maybe you could double your money and get husband and wife duo Jennifer Connelly and Paul Bettany in for a week’s recording session – that’s around $1 million for Suit Lady with JARVIS thrown in for free.

No modern spider-person worth his salt would dare enter the field of battle without his Iron Spider attachment; a Tony Stark-designed added extra, the Iron Spider suit boasts four robotic AI nano-tech spider-legs that are, according to Peter Parker himself, “ridiculously intuitive”.

There’s very little chance of finding a scientist mad enough to create you a real-life version of this Doc Ock-esque exoskeleton. However, if you’re after some AI-powered robotics then try a company like Boston Dynamics, the tech firm who excel in creating responsive animal-like robots like Spot, the robo-dog who can be seen having the crap kicked out of him in various viral YouTube videos for some reason.

Boston Dynamics plans to commercially release a low-end version of Spot this summer, at a price point likely to be around $25k. Buy two for $50,000 to double the number of hind legs and, with a little Frankensteining, you’ll have all the intuition you need. Please mute your robot dogs before you start tearing their limbs off, for the sake of your conscience.

Of course, you’re not going to know how to put all of these materials together – you’d need to be an unholy mix of scientist and seamstress to create a costume this complex, and even then it’d probably still ride up in the crotch. No, best you rely on a 3D printer to weave your super-suit for you.

In Spider-Man: Far From Home, Peter Parker uses a mobile 3D printer situated in Tony Stark’s jet, but the best real-life 3D printer you can get at that scale costs $310,000, and also has the added benefit of not being fictional. It’s called The Box and it was created by two Swedish students who clearly didn’t major in marketing. The Box uses Fused Granular Fabrication and is one of the largest and fastest 3D printers on the market – perfect for the superhero in a hurry.

There’s still no guarantee it won’t be tight on the old webshooters though, sorry. It’s all part of the gig.

So, how much is this thing going to cost us in total?

There you have it: if you have SIXTEEN MILLION DOLLARS plus change, then you can officially buy your own superhero super-suit – give or take a few hundred bucks for the odd karate lesson here and there. Just one more thing: make sure you build in toilet facilities, because if you’re caught short and accidentally soil your suit while you’re out crime-fighting, you can’t afford a spare. Take it from Tom Holland, who told us what his ideal customisation would be:

“A zipper so I could go to the toilet, that would be the big one for me.”

You can’t put a price on dignity, you guys.