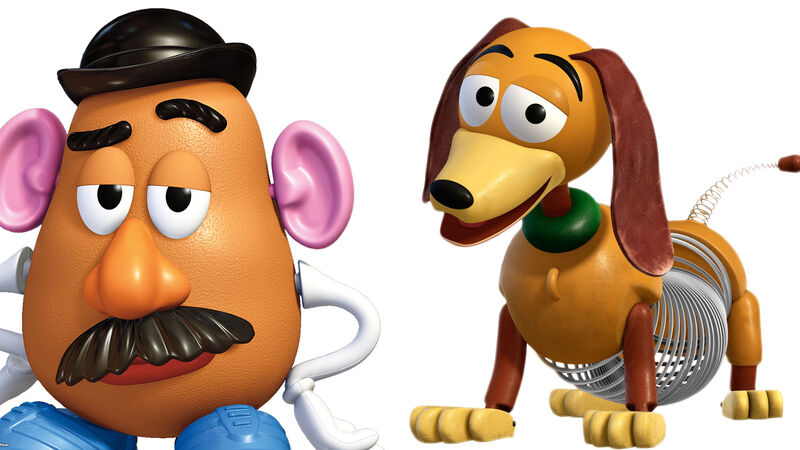 Toy Story 4 is almost upon us, ready to make us feel all of the feels that can be felt. This time, a bizarre non-toy turned toy named Forky (voiced by Tony Hale) is joining the saga, causing Tom Hanks’ Woody to question his own role after he is reunited with Bo Peep (Annie Potts).

It’s not the first time Woody’s had his world turned upside down though. This entire adventure kicked off when the sauntering sheriff found himself outclassed and out-sassed by Tim Allen’s souped-up space ranger, Buzz Lightyear. But Woody’s always represented the old guard of toy-dom – classic, vintage playthings that the children of yesteryear palled around with.

In fact, most of Andy’s toys were throwbacks, even for 1995 when the first movie came out. And while Woody, along with Buzz, were invented for the film, many of the real life Baby Boomer gifts and games that served as their co-stars found themselves thrust back into the spotlight due to the success of the franchise, with a whole new generation discovering and uncovering their joy. Some of these toys in fact experienced a notable surge in sales thanks to Pixar’s precious product placement.

With newly introduced toys being brought in for the fourth film — like Duke Caboom (Keanu Reeves), Gabby Gabby (Christina Hendricks), and Giggle McDimples (Ally Maki) — let’s take a look at some of the most notable genuine classics that previously made the cut and found fame once more.

Talk about a time capsule, Mr. Potato Head has a place in history as the first toy to ever be advertised on television. When it was first distributed however, by Hasbro in 1952, the set didn’t come with a plastic potato body. It was just a bunch of body parts and accessories that you could stick into… a real potato. Or any perishable item, really. Yup, you had to use your own pantry food. And if you got hungry, you could just boil your BFF in scalding water.

It took a decade or so for Hasbro to bring in a plastic mold for the body, and during these early years, a Mrs. Potato Head was also introduced. The couple’s appearance in Toy Story, expertly voiced by Don Rickles and Estelle Harris, moved the toy line back into the limelight and boosted business 800%. While there were previous, mostly forgotten, animated versions of the characters, Toy Story gave both Mr. and Mrs. Potato Head very funny and distinct personalities, which previously didn’t exist, and which are now cemented in the public’s mind when these characters are evoked.

Etch A Sketch has been part of the Toy Story series since the first film, and even just a relatively small amount of screen time in Toy Story 2 offered what is estimated to be the equivalent of $50 million in advertising, giving this shakeable sketch pad an astounding 4,500% increase in sales thanks to the series, according to Salon, with the manufacturer, Ohio Art, seeing its stocks rise 50%. That’s a lot of kids trying desperately to create a decent circle before rage quitting and making stairs instead, which is even more impressive considering that Etch A Sketch isn’t a major speaking role character in the movies.

For a ton of kids going on several decades now, Slinky Dog hasn’t really existed outside of the Toy Story universe. In fact, when the first film was being produced, the Slinky Dog toy, having been introduced in 1952, had been out of production for many years.

Once the movie hit, and the animated version of Slinky Dog (initially voiced in the films by the late Jim Varney and subsequently by Blake Clark after Varney passed away) debuted, demand soared for the resurrected and redesigned toy, which was now based on the revamped — and arguably more adorable and endearing — Toy Story depiction of the character. As reported by the New York Times, in the wake of Toy Story’s November 1995 release, 825,000 new Slinky Dogs sold out well before Christmas of the same year. That’s a lot of dismembered mutts.

Slinky Dog is perhaps the biggest Toy Story-driven success story of them all for a pre-existing toy – maneuvering out of oblivion to become the face and name of an always-crowded, full-blown roller coaster at Walt Disney World’s Toy Story Land. Because of the Toy Story films, Slinky Dog has been re-invented and reincarnated. Not only do these movies showcase these old toys, but they infuse them with voices and updated personas that become part of their new life.

Though there are no hard reports of little Green Army Men experiencing a sales boom post-Toy Story, the soldier characters themselves were part of the film franchise’s overall barrage of merch — sold as Bucket O Soldiers. These little scamps were based on the plastic, inflexible two-inch soldiers that have been around since the 1930s, modeled after United States Army World War I and II-era soldiers.

Naturally, Toy Story lightened the mood a little bit when it came to toys that used to be for simulating battles and brought in the late R. Lee Ermey (familiar as a memorably intense military persona from Stanley Kubrick’s Full Metal Jacket and also a former real-life drill instructor) to voice the squad leader — adding to the “what was once serious can now be silly” vibe.

These tiny titans — along with other pre-established, real-life toys like Barrel of Monkeys, Chatter Telephone, Peas in a Pod, and more — added to the sprawling landscape of classic collectibles and past playthings that filled young Andy’s room. Now their likeness, despite having been around for almost 90 years, is tethered to Toy Story.

As an honorary mention here, the Barbie brand surely got a bump — and a bit of an image makeover — from the Toy Story series, but being that it was still one of the top-selling toys in America at the time anyhow, it’s not quite the same as a vintage item being brought back to the limelight in a big way. Over a billion Barbies have been sold, making it Mattel’s most successful line of all time.

In fact, the most interesting thing about Barbie with regards to Toy Story is that Mattel wouldn’t let the iconic character appear in the first movie. Then, after the film was a mega-hit, the all-clear was given for Barbie dolls in general to be added for the sequel, leading to a larger appearance and more clearly defined character in Toy Story 3, with Barbie now seen alongside Ken. This was followed by the doll duo then taking center stage in the Toy Story: Hawaiian Vacation short. All of these Toy Story appearances helped add an appreciated, winking sense of humor to a brand that could sometimes be perceived as pretty square, even though it was an inarguable sensation on its own. Despite being a top-selling line, Barbie (and Ken) still rode Toy Story’s wave of success.