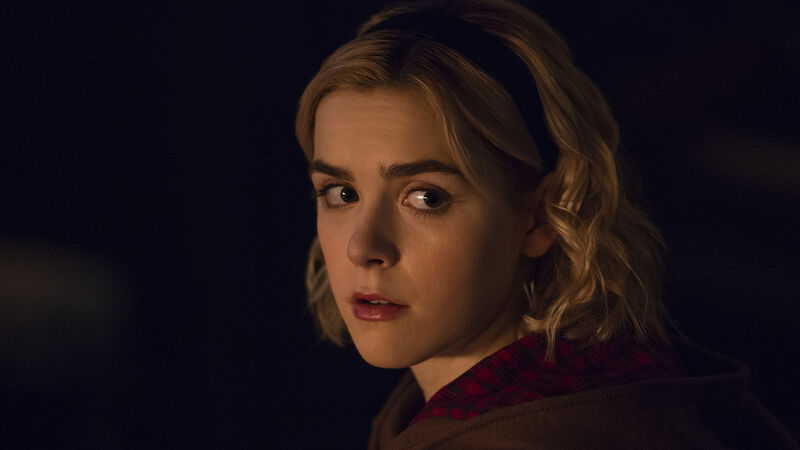 If you’re watching The Chilling Adventures Of Sabrina on Netflix, you’ll know that it’s a very funny, occasionally petrifying, ultra-progressive, extremely emotional TV drama. Well, that’s what we think. But what do actual witches think about the way their culture is represented in the show? We pulled together a coven of witches to tell us what’s what…

“My name is Tania Ahsan. I’ve been a practising witch for 25 years and was previously the editor of Prediction magazine, a now-defunct occult magazine. I write the witchcraft column for Kindred Spirit magazine.”

“My name is Evelyn Hollow, I was raised with a mixed background of Celtic Pagan beliefs & Mediterranean Roma blood. As an adult, I obtained a Master’s degree in Psychological Research specialising in Paranormal Psychology. I have been an academic of the occult for more than six years and was a lecturer of Psychology for the last few of those years.”

“And my name is Anna McKerrow. I’m a fiction writer and eclectic Pagan witch. My work is always about witchcraft, and I’m passionate about representing modern, contemporary witches in realistic and thoughtful ways.”

So the new Sabrina, let’s start with what you think the show did well… and what it didn’t.

Anna: “I’ve read so much comment about the new Sabrina show from other witches. I think most of us are enjoying it for what it is: a fun TV drama. If you want to talk about realism… well, someone walking in the woods chanting to themselves or meditating or even a group ritual isn’t going to fit this kind of high-action, stylised TV format. Witches and those following alternative, broadly Pagan/polytheistic or pantheistic beliefs often tend to be philosophical about the inaccurate ways that they and their spiritual beliefs are depicted in fiction, partly because the stereotypes are so pervasive, partly because of an attitude that runs ‘whatever — allows me to stay under the radar’ and, I would say, a mindfulness of the still-recent repeal in the UK of the witchcraft laws in the 1950s.”

Tania: “There are Satanic witches but it is only one type of witchcraft. A far larger sect of witchcraft is Wicca, the way devised by Gerald Gardner in the 1960s. But I’m not surprised that they decided to go with the Satanic type. This seems to be a bit of a wet dream for the Bible Belt and is the antithesis of the feminist witchcraft that is currently seeing a huge revival. The idea that a woman can only have power when she is an evil cannibalistic Satan-worshipping minx is one that has been put about to keep women down. It breeds fear of witchcraft and the occult. The salt baths to cleanse energetically is pretty accurate though and some witches work with animal guides. Although I don’t think they call them ‘familiars’ as this is again something that is rooted in the literature of a tradition that persecutes and wilfully misunderstands us.”

Evelyn: “I think it’s an improvement on the original series. I liked the original series, but it was more about the pitfalls of being a weird teenage girl than it was about witchcraft. I think this one is one of the better paranormal horror shows to come out in recent years. I also applaud its use of diverse casting and inclusion of important narratives that intersect race, gender, and socioeconomics.”

Anna: “Sabrina is good in my view because there has been a reasonable amount of research done in the detail; cleansing bad energy/curses with salt, the fact that worship takes place outside in nature, the reference to the historic, inherited trauma of the witch trials and how that still affects women now. How we still feel and fear that punishment for standing in our power. I believe they have witch and occultist consultants for the show, which is a good thing. I also like that Sabrina practices magic in ‘ordinary’ ways too – forming a support group for the girls at her school, doing things in her world that makes change in positive ways. Magic is the changing of one’s experience of the world in a beneficial way. Witches know — or should know — that writing good CVs, voting and earning money are all necessary and effective things as well as journeying, meditating, chanting and being in nature.”

What would be your main criticism of the show?

Evelyn: “Perhaps the Hollywood glamourizing of witchcraft as high-drama rituals involving getting naked and spilling blood in the woods under a full moon. Everyday rites are more small moments of ritual crafted in order to create spaces that have positive effects on our mental health and restore feelings of control to our lives.”

Anna: “For me, the main problem is the Beast as Sabrina’s witch family’s deity or spiritual leader. Now, that is not to say that there aren’t witches who might work with the Lucifer energy and do what is called ‘shadow work’, which is absolutely nothing to do with the schlocky Hammer Horror devil stuff we’ve all been brought up on. Shadow work is the absolutely necessary healing and recognition of our full selves by loving all that we are; the balance of ourselves as perfectly imperfect beings. The ‘Beast’ is, as witches see it, also not a problem — that’s Aleister Crowley’s naming of the sexual life force of humanity; the horns of the wild horned gods of nature. The main problem with these terms and representations is the Christian duality of light/good and dark/bad that lies under them. This duality is at odds with a witch’s worldview, which tends more to the holistic and embraces the dark as a necessary complement to the light.”

Tania: “I think it is actually quite racist. Why is good always white or light? Why is evil always dark or black? The fact is there is no easy dualism in the way that it is described. The reason it has played out this way is that monotheism needs to find a way to suppress the Paganism that went before so the Horned God, the representation of the male divine, was co-opted as the image of the Devil and witches were all meant to be butt-kissing this goat-legged fallen angel. They absolutely hate that instead women might have freedom and power and so they have to attribute it to a male overlord. Yeah, good luck with that.”

Can you think of any other areas of pop culture where witchcraft has been covered well?

Tania: “Neil Gaiman’s Sandman comics had a character called Thessaly who I felt was an accurate depiction of a witch. She played by rules that weren’t those that we attribute to either a hero or a villain, again she moved beyond the duality and basically just did what worked and made her way in the world in the manner she wanted. She was also depicted as a very plain-looking bespectacled woman who was quiet and watchful. She definitely did not wear a Grand Puba cape and put up a website with many different colours and fonts and a predilection for writing IN CAPITALS. Another top description is Gandalf in Lord of the Rings; he feels fear and goes through a journey in which he faces his greatest fear and emerges stronger and better. Of course, his hair is all white afterwards so the trope of white being right is still there, but props to him for facing his demon.”

Evelyn: “The Craft is one of the better displays of young women developing their path via witchcraft. The kind of spirit invocation and binding practices they use are relatively common in covens.”

Anna: “I always enjoy The Wicker Man, to be honest – apart from the grisly end, it’s quite nice to imagine what a free-spirited Pagan island might look like! And I liked Willow Rosenberg as a witch in Buffy because she learns to be a Wiccan witch. It’s very ’90s but she’s a normal girl, she’s a lesbian, she studies, she gets things wrong, she’s part of online witch groups. It went quite supernatural with the witch storyline in the end but the beginning was good. Oh, and Marion Zimmer Bradley’s The Mists of Avalon is a hugely popular book among witches because, though it’s fantasy and set in the King Arthur myth, it was one of the first — and still very few — fiction works to celebrate the empowerment of the goddess on Morgan, the witch character. It shows her route to power, her learning her witchcraft as a priestess of the moon and her adoration of the goddess.”

Thank you for your time! Before we go, tell our readers anything you’d like to plug…

Anna: “Thank you! My current book Daughter of Light and Shadows is available on Amazon…”

Tania: “My insta is @Tania_The_Witch and my website is taniaahsan.co.uk — there’s an e-book of candle spells on there isf you fancy having a go yourself!”

Evelyn: “I’m a resident author on a publication called Esoterica Zine, which may be of interest to anyone interested in the obscure. In fact, the next issue to be released is themed around witchcraft! Issues can be accessed at https://gumroad.com/esotericazine Other than that my Twitter, @_EvelynHollow is the best place to find me!”