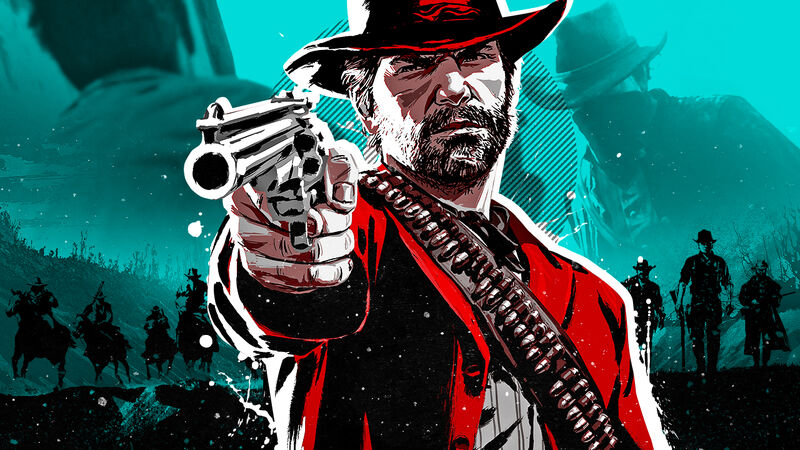 Just like Grand Theft Auto V before it, Rockstar’s latest takes the concept of the cold open very literally.  Thrust into the midst of a severe snowstorm, we find protagonist Arthur Morgan huddled amongst a terrified ensemble of men, women, and children as they desperately seek shelter from the elements. Yet, it’s not just the convincingly bitter weather that lives up to the cold open trope. In Red Dead Redemption 2’s eyebrow-raising prologue – the prequel to a game where players spend around 40 hours tracking down and murdering these same gang mates – you soon find yourself struggling to survive amongst (what seem like) disarmingly reasonable folk.

It’s a jarring and wonderfully understated opening —  a far cry from the gory train robberies and heroic heists teased in trailers. Instead, we’re introduced to a cast of characters who find themselves in a situation that’s bleak, unexpected, and complex – which as it turns out, perfectly sets the tone for the surprising journey that awaits players in Red Dead Redemption 2.

Being a prequel, it’s all too easy to pick up the controller and think you know exactly how this blood-soaked tale ends. Yet, just like in Television’s nail-biting Better Call Saul, the second part of Rockstar’s cowboy chronicles deviously turns what you know about these characters against you, introducing just enough new faces to muddy the established lore and ensure that this epic never really feels predictable.

To anyone who’s played a Rockstar game before, it won’t be a surprise to hear that Red Dead Redemption 2’s script is razor sharp. Whether it’s the surprisingly memorable conversations you have with one-off NPCs, to the haunting cutscenes of the finale, this Western epic once again reaffirms interactive entertainment’s power as a storytelling medium.  Equally unsurprising, is that this sprawling open world opus largely abandons GTA’s trademark humour in order to tell a more tragic and reflective tale.

While we could write another 1,000 words on just how impressive the script and voice acting is, even that reliably clever Rockstar dialogue pales in comparison to the real star of Red Dead Redemption 2 —  its jaw-droppingly authentic world.

With most video games, there’s an almost unspoken rule that they’ll require a hefty suspension of disbelief.  And this is doubly true with open world experiences. Often in open world games, the fun little collectathons and shooting sections that occur in the world feel jarringly inconsistent with the narrative the main story is trying to tell.  Yes, you can do X EXAMPLE IN X game world, but of course, those clever systems mean you won’t be able to do Y.

But, just like The Witcher 3 and Breath Of The Wild before it, Red Dead Redemption 2 slashes away at more of the invisible restraints that hold these interactive worlds back, and in the process, raises the bar for sandbox video games to staggering new heights.

Once Upon A Time In The West

Like its predecessor, Red Dead Redemption 2 manages to feel less like a complex melding of different lines of code and more like a living, breathing world. Galloping across the dusty trails of the old West, rays of sunlight glare convincingly over the treetops. As we slow our horse on a crossroad to marvel at the idyllic mountain range looming above, an angry wagon driver yells at us to get out of the road.

It’s a world with such a defined sense of place and character, that at times, it’s hard not to get completely lost in it. One simple mission before dinner soon escalates into an impromptu cross-country journey. Without warning, minutes evaporate into hours, the problems of the real world soon drowned out by the gentle sound of slide guitar and the pleasing patter of galloping hooves.

Yet, it’s not just the stunning presentation that makes this world feel so vivid — it’s the tools you’re given to interact with it. When it comes to making your mark on most game worlds  — Rockstar’s other works included — players are normally given two options: commit violence or do nothing.

In Rockstar’s latest, every living creature can be interacted with. Whether it’s taking the time to greet or antagonize every pedestrian you encounter in a bustling city, calming a wild horse, or petting a particularly friendly farm dog, NPCs and animals in this game feel like they have personality. That they exist as more than just walking targets in an elaborate firing range.

A Fistful Of Systems

Unlike when you get immersed in most video games, it’s not just your real life duties that will get hastily forgotten as you roam this seductive world. Around a third of the way in, a particularly tense five or six hours saw us become utterly lost in the life of Arthur Morgan and deeply entangled in the gang’s struggles. Worried about our next heist, cleaning the blood from our guns, and drawing attention away from our camp of wanted criminals, it wasn’t until we panned the camera around that we noticed what we’d neglected. To shave. While we had been busy robbing trains and running errands, Arthur Morgan’s once well-kempt facial hair had grown into a nipple-hugging beard.

Whether it’s eating too little, drinking too much, or even wearing the wrong outfit, Rockstar’s world feels so disarmingly real that we’d often be convinced that these systems didn’t really work. Even towards the end of the main story, our negligence would catch up with us — and we’d constantly have to remind ourselves that they were actually in the game.

In most games, you have to worry about a handful of complex systems colliding and breaking each other. In Red Dead Redemption 2, your only worry is whether you can remember all of them.

It’s a level of attention to detail that never fails to make your jaw drop, even when you’re close to the 100-hour mark.  In fact, Rockstar’s world is often so staggeringly well-realised, that it’s only when you fumble a turn on your horse or stumble upon a (rare) glitch that you’re reminded that this perfectly crafted playground is actually a video game.

No Country For Old Men

There’s long been a notion that video games are meant to be fun, yet, for a large part of Red Dead Redemption 2, roaming the increasingly tamed West is anything but. With the dawn of the civilised world slowly closing in on Morgan and the (many) enemies of the Van der Linde gang vying for your blood, the mid-section of Rockstar’s latest is surprisingly tense.

Where at the start of your journey galloping around this beautiful world feels like a wonderfully freeing experience, over time those once picturesque mountains become a possible ambush spot. Every passerby becomes a potential threat and you imagine a hired gun lurking behind the shadow of every tree. For a good ten hours, one of the most populated worlds in video game history becomes an incredibly stressful and isolating experience.

Once again, it feels like Rockstar has dropped cinema-esque storytelling and opted to use the power of interactive entertainment to take you on a more TV-esque arc. Yet, unlike when watching a show like Ozark or Breaking Bad, you’re not a passive observer here. In Red Dead Redemption 2, it’s your decisions that help send Arthur Morgan down this increasingly dark and dangerous path. It’s an intense and difficult section of this journey, but like all brilliant works of art, it’s an experience that has a lot to say — and one that will likely stick with you long after the credits roll.

Is Red Dead Redemption 2 Any Good?

There’s honestly so much to talk about in Rockstar’s latest that this  review could easily became a staggering epic of its own. We could go on to devote several hundred extra words on the brilliance of the game’s crafting system, write a paragraph to gush over the variety of its emergent side quests. We could tell you tales of how thrilling it feels when to track down legendary animals to hunt… or even just how stupidly fun it is to get drunk in one of the game’s many, many saloons.

Where many game developers create huge, lifeless maps and litter them with collectables, Rockstar’s latest is simply brimming with life and personality.

As a narrative-driven experience, it’s a resounding success too. Like the best prequels, Red Dead Redemption 2 not only enriches the lore of the original but leaves you yearning for more. Despite being slightly square-eyed and sunlight deprived by the end of our seven day and 70 hour long review session, once those credits rolled we could quite happily put everything else down and dive straight back into the original game to continue the story.

In other words, Red Dead Redemption 2 succeeds on all the levels you’d hope it would. As Rockstar’s first game built for this current gen of consoles, it’s consistently a technical marvel.  But while this open world opus meets pretty much every lofty expectation, its greatest achievement is what it dares to do differently.

Thanks to both its shocking cruelty and its awe-inspiring potential, this stunningly well-realised recreation of the Wild West is the first game world that truly mirrors our own. Rockstar’s latest playground is a place that’s equal parts brutal and beautiful, and somehow, like in our own reality, the weight of your decisions in this game world have just as much potential to delight you as they do to terrify.