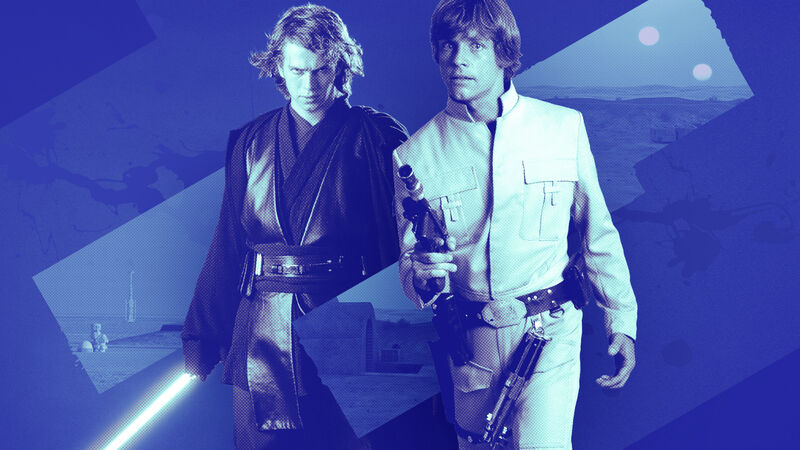 From ‘Revenge’ to ‘Empire’: Anakin’s Relationship With Luke Between Films

There are a galaxy load of themes to discuss within the Star Wars Skywalker saga: destiny, hope, the battle between good and evil, cool laser swords that go kssshhhhtt vrummmummm… the list is endless. However, one recurring theme that really sits at the heart of key moments throughout Episodes I-IX is that of fatherhood. From direct biological lineage to surrogate father figures, Star Wars is rife with patriarchs doing both right and wrong by those that look up to them.

And there is, of course, no more important father-son relationship than that of Anakin and Luke Skywalker. This is the one that practically runs the whole gamut of family feelings in less than twelve parsecs. It ultimately brings balance to the Force, but not before throwing it in darkness. It’s the daddy of all daddy issues.

Despite this, there isn’t actually that much time spent in the films exploring the relationship. From the moment that baby Luke is born, alongside his twin sister Leia, to a dying Padmé, without the knowledge of Anakin — himself in the midst of getting his life-sustaining Darth Vader armor — at the end of Revenge Of The Sith (celebrating its 15th anniversary this month) it seems there’s no contact between them at all until Vader senses that “the force is strong” with one particular pilot during the Death Star trench run. And then we go the whole of The Empire Strikes Back (celebrating its 40th anniversary this month) before one of the biggest reveals in cinema history occurs: “No, I am your father”.

But was that really it? What happened in between? Did Vader try to ever trace the powerful pilot after the first Death Star was destroyed? When did he make the connection that he was his son? Luckily, we have several canon stories told outside the films to go by.

This means that we need to skip over the encounters between Luke and Vader that occur in the previous Expanded Universe timeline of events explored in books and comics. In 2014, these were retconned under the banner Star Wars Legends to make way for the new Star Wars sequel trilogy. So, for example, the story told in Splinter Of The Mind’s Eye — published in 1978 and regarded, along with the ongoing 1977 Star Wars Marvel Comic, as the kick-off to the Expanded Universe — in which Luke has a lightsaber duel with Vader only to survive and escape thanks to Obi-Wan guiding his movements from beyond the Force grave, no longer technically happened.

Unlike the events told in a series of comics published since 2015 that explore the real father-son drama of the Skywalker saga. Those definitely did technically happen. The following is based on those very true stories…

Sticking to in-canon appearances then, the first chronological instance of Luke and Vader coming within Force-choking distance of each other occurs in Star Wars Annual #4, published rather recently, in 2018. In this story, set shortly after the destruction of the first Death Star, both Skywalkers unknowingly embark on different parts of the same mission, as they each take turns coming into possession of a crossguard lightsaber that once belonged to the Sith Lord Darth Atrius.

While both have different experiences with the weapon — which Atrius filled with so much rage and anger, that feelings of hate would overwhelm anyone who came to use them — they were coincidentally in close proximity. The only time their paths actually crossed during this time though was when Luke inadvertently entered a podrace while trying to escape some Imperial Stormtroopers and Vader witnessed the sport. When the commentators expressed excitement at the human racer taking the lead, Vader sensed the strength of the Force within him and used his own power to make Luke crash so that young Anakin Skywalker’s own podrace record from the Boonta Eve Classic would remain intact. Who knew the Dark Lord of the Sith could be so petty?

Whose lightsaber is it anyway?

A more direct encounter between the two happens in the Marvel comic series Star Wars, published in 2015. When Vader arrives at Weapons Factory Alpha on Cymoon 1 to negotiate with Jabba the Hutt’s contact, he walks right into a Rebel ambush and eventually comes face to face with Luke, without knowing that he’s his son, and with Luke still believing that Vader actually killed his father.

After Luke angrily attacks the Sith Lord only to be easily knocked to the ground, Vader takes his lightsaber from him and is about to kill him, until he realizes that the lightsaber he’s holding is his own old one. The hesitation is enough for Han to rescue Luke, letting the farm boy escape, and after much chaos, in which Han tries to control an AT-AT to step on Vader and Luke manages to gun down several stormtroopers with a speeder bike, Luke is able to reclaim his father’s lightsaber.

As the rebels escape, Vader orders more Stormtroopers to follow and kill them; all except for the young rebel, in whom he has suddenly developed a great interest…

Revelation of the Sith

Immediately following the previous showdown, Jabba offers Vader the services of two bounty hunters and he orders one of them – one Boba Fett – to track down “the Rebel pilot” and bring him back alive. Luke, meanwhile, is left in doubt about his abilities as an aspiring Jedi and returns to Tattooine looking for answers about his destiny.

Boba Fett eventually catches up with Luke at Obi-Wan Kenobi’s old home and blinds him with a flash grenade, which handily explains why Luke doesn’t recognize him later on in the films. Still, Luke is able to fend off the bounty hunter by using the Force and this gives him a newfound confidence in his powers. With Luke managing to escape, Fett eventually meets with Vader again aboard a Star Destroyer and explains that he lost the boy, but not before finding out his name… Skywalker.

The revelation that he has a son leaves Vader silent, his mind whirling about Padmé’s pregnancy and what the Emperor must have kept from him, but his resulting rage shatters the viewport in the room.

Return of the Sith

In a later comic, Darth Vader #7, the Sith Lord’s actions after this discovery are tracked and he returns to Tattooine to try to find out more about his son. He visits the Lars moisture farm – now abandoned – and finds no trace of Luke, but recognizes that Stormtroopers clearly killed his family, and notes that this would make for a strong motivation for revenge against the Empire.

He then visits Kenobi’s home, still wrecked from the skirmish between Luke and Boba Fett. Using the Force, Vader senses what happened in the fight and realizes that, while his son is strong in the Force, he hasn’t had any training. He then leaves, using a molecular purge bomb to remove any trace of his presence.

Over the course of the next several issues of the Darth Vader comic series, Vader continues to try to track Luke’s whereabouts until he eventually learns that he is to be found on the planet Vrogas Vas where there is apparently a Jedi Temple. Vader travels there alone and ends up in a dog fight with several Rebel pilots, sensing that Luke is among them. When Luke realizes that the pilot of this intruder ship is Vader, he deliberately crashes into him to try to take him out, and both Skywalkers fall to the planet’s surface. Once there, Vader is forced to defend himself against a group of rebels, and Luke is attacked by Vader’s associate, Doctor Aphra.

Luke is eventually rescued by Han Solo and Chewbacca, while Vader makes light work of the rebel troops and comes face to face with Leia, only for his rival, Karbin, to intervene, looking to kill Vader and claim Luke and the princess as his own prize. Leia is thankfully able to escape as the two Imperial baddies clash lightsabers. Ultimately, Vader is left watching as the Millennium Falcon flees the planet with his son on board.

Striking Back against the Empire

Which brings us pretty much up to speed with The Empire Strikes Back and with what we originally thought was the first time that Vader finds out that Luke is his son: the Emperor spelling out that “We have a new enemy. The young rebel who destroyed the Death Star. I have no doubt this boy is the offspring of Anakin Skywalker”. Note that this was changed in the Special Edition release from the original “We have a new enemy: Luke Skywalker”.

The only question now is, when Darth Vader replies “How is that possible?”, is he trying to hide the fact that he already knows about his son from the Emperor? Is this the start of him turning against his own Sith master? Perhaps Vader’s path to redemption started a little sooner than we previously thought, and it began the very instant he found out about his son.

Bet he feels bad about making him crash during that podrace now.