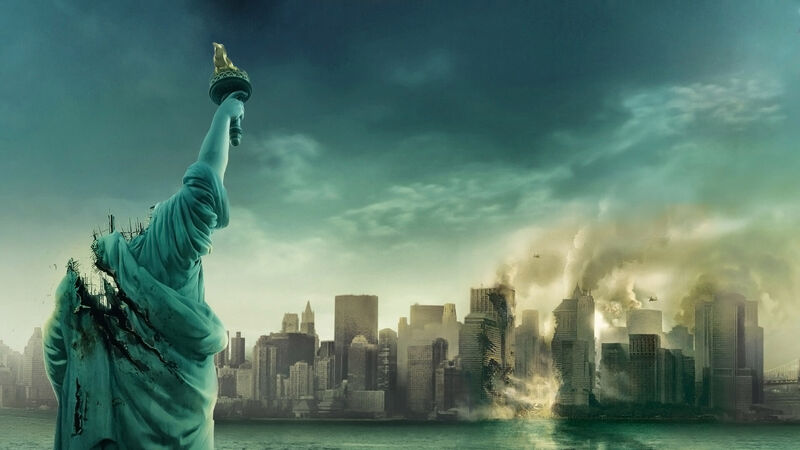 Now here’s something I thought I’d never say: This month, there’s another Cloverfield movie coming out.

10 Cloverfield Lane is Bad Robot’s mysterious follow-up to the 2008 found-footage monster film, and it stars Mary Elizabeth Winstead, John Goodman, and John Gallagher Jr. as a trio of characters holed up in an underground survival bunker. Why are they there? Goodman’s character speaks of a chemical attack that has poisoned the world outside, but is he telling the truth? As always with a Bad Robot movie, the truth is locked deep inside the mystery box. Will this new film take place within the same continuity as the original? It’s unclear, but producer J.J. Abrams has said that this new film is the “blood relative” of Cloverfield. In the likely event that

In the likely event that 10 Cloverfield Lane does spring from the events of the first film, let’s take a look back at director Matt Reeves’ original monster mash.

I’ve never seen a January release marketed like Cloverfield. Back in July 2007, the infamous first teaser was attached to prints of Transformers. There wasn’t anything out of the ordinary about the teaser until the end — there was no title. Instead, moviegoers were only given a date: 1-18-08. So that’s what we all called the movie. When this teaser hit the web, it sparked a wildfire of discussion and debate. One particular moment in the teaser really got people going: A large explosion is shown in the distance, and a man can be heard screaming, “I saw it! It’s alive! It’s huge!” This was heard by some as “I saw it! It’s a lion! It’s huge!” and suddenly people were thinking it was gonna be a Voltron movie.

All over the Web, people were trying to spot hidden monsters on the film’s poster, to no avail. Fake brands from the movie (remember Slusho?) were bandied about in a viral marketing campaign that both mystified and energized film fans. It wasn’t until November 2007 that the real title of the film was confirmed. As it turns out, while the public was still calling the film 1-18-08, the folks at Paramount and Bad Robot were still trying out different names. The hype machine cranked hard on Cloverfield because of the unconventional approach. Paramount didn’t have to do a whole lot — they just doled out little clues (many of which ended up being meaningless) and the Web film community ran with it.

That community is more jaded today, partially due to ineffective attempts at marketing films by using similar “viral” or cryptic methods. It doesn’t work like it used to. That’s why 10 Cloverfield Lane‘s marketing approach is so interesting — we were blindsided with a trailer two months before theatrical release. That’s even more minimal, and even more surprising. “Monsters come in many different forms,” reads the tagline on the poster. The recent Super Bowl teaser features a loud roar, but what monster (or monsters) will we see? The answer may lie with the original film.

Giant monster movies weren’t as common in 2008 as they are today. We’re in a post-Pacific Rim world now, where nearly every film geek knows what a kaiju is. But in 2008, the last Godzilla film (Final Wars) had come out four years prior. That franchise was in decline, and Americans weren’t terribly interested in seeing more of the big green guy after Roland Emmerich’s less-than-inspiring 1998 version. Cloverfield’s monster (affectionately known as Clover) was a fresh and curious design because of its odd shape. It’s not an iconic design, because you could never quite grasp what the thing really looked like. You couldn’t fit a person in a Clover suit — it was all huge spindly legs and weird movements. The unconventional design and the reluctance to show the creature made it even more mysterious, but the intention to keep the monster out of the film isn’t just about mystery. It made it possible for Paramount and Bad Robot make an action-packed kaiju flick for a mid-budget price. But more importantly, it enforces the idea that Cloverfield isn’t so much a monster story; it’s a harrowing and bleak disaster film that plays with the idea of extremely limited perspective in a larger narrative.

For most of the film, the central dramatic conflict is about a group of friends trying to rescue one of their own in the midst of a disaster. Clover is just an unstoppable force of nature, a typhoon with legs and teeth. The reason why the film doesn’t tell us where the monster came from or exactly why it rose from the depths is because those details just aren’t all that important. If it were crucial to know that stuff to enjoy the film, it would’ve been included in the film itself, period. That’s just base-level competent filmmaking. There are canonical explanations for how and why Clover came to the surface, but they were explored in the accompanying manga series and several marketing websites.

But as a self-contained story, it’s just not about the monster. The film does, however, take a brief detour into mean-spirited creature horror when scary parasites attack the main characters, causing poor Marlena (a perfectly cast Lizzy Caplan) to literally explode. Though it takes place in silhouette behind a sheet of plastic, it’s still shockingly gross. It’s short little moment in the movie, but eight years later, it might be Cloverfield‘s most memorable scene.

Before 10 Cloverfield Lane, the original film really didn’t have much of a legacy, if we’re being honest. It broke January box office records and gathered a surprising amount of critical acclaim. It was even named as the third best film of 2008 by Cahiers du Cinéma (the prestigious French film magazine that Francois Truffaut, Jean-Luc Godard, and Éric Rohmer used to write for back in the day). To put that in perspective, No Country for Old Men was number four on that list. So why didn’t Cloverfield stick around? Why doesn’t it feel more culturally significant today?

The most likely reason is that an honest-to-goodness sequel never happened. Why? Well, that’s all boring dollars-and-cents talk. But when you break the film down, its central drama isn’t all that propulsive, because the characters are hard to care about. They’d just be crowd extras in the Roland Emmerich version of this movie. They’re attractive yuppies whose interpersonal conflicts and characterizations are birdbath deep, so it’s safe to say the film isn’t a character study or a statement on the power of love. There’s just not enough meat on the romance to really get invested in it. So the flick breezes from one set piece to the next, running on little more than adrenaline.

Above all, Cloverfield is an exploration of human panic in a disaster, seen through a very rough and naturalistic found-footage lens. It’s a scrappy movie, using the quirks of the dying HD tape format to break up the film and add exposition. After Cloverfield‘s success, the found footage style got a lot slicker. Audiences weren’t subjected to as much nausea-inducing camera shake. Eventually we got stuff like Josh Trank’s Chronicle, which, in comparison, is a much glossier and more traditionally cinematic take on the style.

Then, last month, it came back just as mysteriously as it had arrived eight years ago.

Now, eight years later, the legacy of Cloverfield has been revealed in 10 Cloverfield Lane. What should we expect? I can tell you that nearly all of this new movie takes place in the cramped underground bunker seen in the trailers. And I’m hearing the words “Twilight Zone” thrown around a lot when people talk about the film online. What will the Cloverfield title mean? Is it just a meaningless word (a highway exit J.J. Abrams used frequently) used by Bad Robot for a potential anthology of otherwise unconnected sci-fi films, or will they share a deeper connection?

We won’t know until March 11. In the meantime, give the first one another shot, then head on over to Cloverpedia to read up!