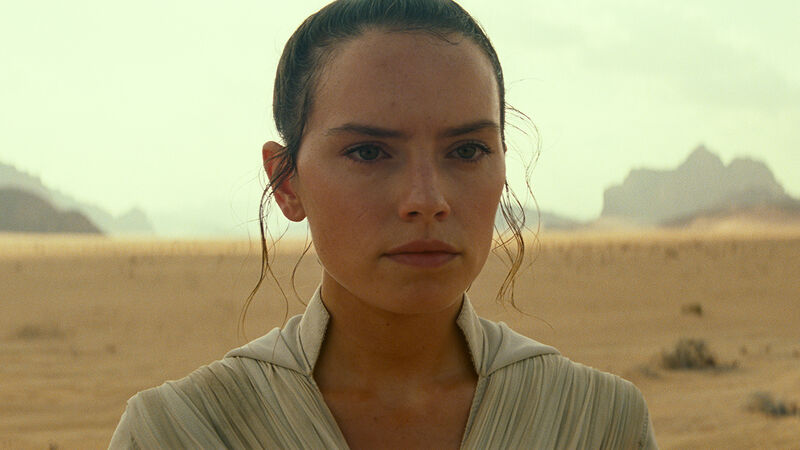 If Star Wars is anything, it is a story that deals in rhyming narrative beats. Things that have happened before, happen again, in a never-ending flat circle that at times can feel both too coincidental and yet all too believable given the nature of the Force. In Revenge of the Sith, Anakin Skywalker — now going by the name Darth Vader — loses his lightsaber following his battle with Obi-Wan Kenobi, forcing him to (off-camera) forge a new one. In Return of the Jedi, Luke Skywalker had previously lost the same lightsaber as his father, forcing him to (off-camera) to forge a new one. So it makes sense the end of The Rise of Skywalker would see Rey lay aside that now-historical lightsaber in favor of one she created, again, off-camera.

It also makes sense to introduce a new kyber crystal color into the live-action films at this point. Luke’s green lightsaber was a shocking development in 1983. Fans didn’t even know lightsabers could be different colors than the two already seen. Now, kyber crystals come in every hue imaginable, even some as black as the void or as white as the heart of a star. But some colors are still rarer than others, with blue and green dominating the narrative. And yellow? That’s a color that’s barely been seen in canon, much less in a live-action Star Wars entry. Not surprisingly, it makes the color of Rey’s new lightsaber very significant.

EVERY KYBER OF THE RAINBOW

The most important, weirdest thing to know about kyber crystals is that they are sentient. At the heart of every lightsaber (and every world-destroying Imperial weapon) is a creature so alien it doesn’t register as a form of life, despite having a collective hivemind consciousness through the Force and the ability to both communicate and bleed.

This knowledge fundamentally changes the process of creating a lightsaber. For millennia, near the end of their training Jedi Padawans were taken to a planet called Ilum. Harboring one of the densest deposits of kyber crystals in the galaxy, each Padawan would be sent out to search for “their” kyber crystal. The trial ended when a kyber crystal would reach out through the Force and select a child. Jedi weren’t choosing lightsabers; lightsabers were choosing Jedi. It adds a whole new layer of meaning behind the Jedi code to always treat your lightsaber with respect.

For most Jedi, a blue or green kyber crystal chooses them. For Mace Windu, a unique amethyst kyber bonded with him. Another unique kyber blade was the mysterious Mandalorian Darksaber with a black kyber crystal. Then there was the Sith. In the novel Ahsoka by E.K. Johnston, it was revealed that all Sith lightsabers are red because the kyber crystals are in pain. The agony of the Dark Side causes them to “bleed.” Upon rescuing a Sith lightsaber, Ahsoka Tano’s healing powers turned the kyber crystals white, the only known version of that in the Disney-era Star Wars canon.

One of the most significant moments in The Rise of Skywalker is the reveal that Rey can heal the injured. Not all Jedi are equally skilled at all aspects of the Force. Some are better at lightsaber combat, some excel in precognition. There are Jedi that can sense an object’s history just by touching it and Jedi that can manipulate nearly any mind. Then there are the healers. An ability rare enough to have never made an appearance until the episode of The Mandalorian that aired the day before The Rise of Skywalker hit theaters, when Baby Yoda — or “The Child” as he’s officially known — showed the same power.

Rey’s ability to heal without doing much (if any) damage to herself, along with her intense desire to protect the ones she loves, makes her as close to a Jedi Sentinel as has been seen in canon. Before the expunging of the Expanded Universe (and relabeling those stories as “Legends”), modern Jedi came in three schools of thought. The Guardians focused on combat. The Consulars focused on the mystic. The Sentinels blended the two into a balance of skill and raw power. The security forces of the Jedi Temple all came from the Sentinels. Called Jedi Temple Guards, they remain in canon, appearing in both Star Wars: The Clone Wars and Star Wars Rebels. They are also the only known canon representations of yellow lightsabers (as the Jedi known as Tosan has a double-bladed yellow lightsaber, and only Jedi Temple Guards carry that weapon, it is safe to assume Tosan was indeed a Temple Guard).

This is important because, again, kyber crystals choose their Jedi. There is something special about Padawans to return home with a yellow kyber. They are invariable evenly balanced, focused on protection, and have a sense of empathy for those in danger. All qualities Rey possesses. If the Jedi are to survive this new infancy, the Order could do a lot worse than a Jedi Sentinel as the vanguard.