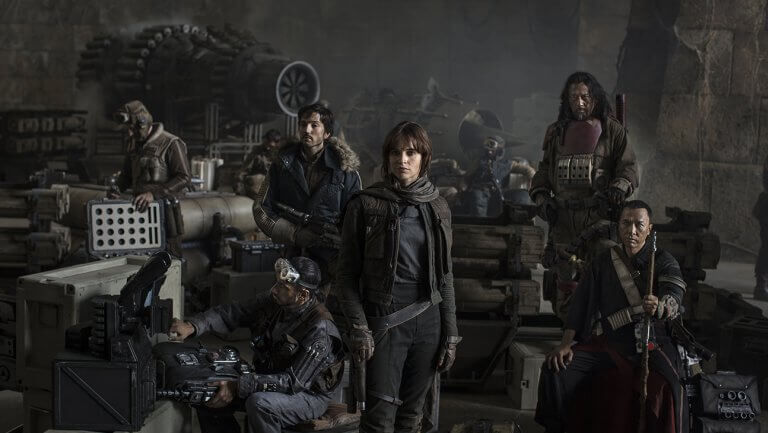 Stealing the Death Star Plans: The Road to ‘Rogue One: A Star Wars Story’

“It is a period of civil war. Rebel spaceships, striking from a hidden base, have won their first victory against the evil Galactic Empire.”

The teaser for the first Star Wars anthology film, Rogue One, is here. The film tells the story of the Rebel Alliance‘s first victory against the Empire alluded to in the opening crawl of A New Hope – the theft of the Death Star plans and how they came to be rattling around in R2-D2’s rusty innards. However, those of us Star Wars fans versed in the vast expanded universe – now known as Star Wars Legends – know that the theft of the plans has been covered extensively in various media including computer games and novels.

With that in mind, we delve into the myriad ways that Star Wars Legends has covered the theft of the Death Star plans and the convoluted continuity snarl (and eventual retcon) that ensued which was only rivaled by how many times Boba Fett fell into the Sarlacc, climbed out, and fell back in again. Or maybe who actually did steal the shuttle Tyderium. Video games are the primary culprit for the continuity minefield since, like destroying the Death Star or tripping AT-ATs at the Battle of Hoth, stealing the Death Star plans was a staple adventure within Star Wars video games.

The first non-film mention of the theft of the Death Star plans was made in the Star Wars radio drama, an adaptation of A New Hope that was released in 1981 by National Public Radio. The Rebels learn of the existence of the Death Star from an agent on the planet Ralltiir, which was later confirmed by Lord Tion before he “accidentally” died of natural causes by falling onto his blaster while pulling the trigger. Leia Organa takes the Corellian corvette Tantive IV to Toprawa to receive a transmission containing the Death Star’s technical readout. Following the transmission, the Tantive IV was chased out of the system by Darth Vader aboard the Star Destroyer Devastator, only to reappear above Tatooine in a suitably impressive over-camera flyby.

Paul Cockburn wrote Jedi Dawn, a choose your own adventure book that was only published in the United Kingdom in 1993. The reader takes on the role of Havet Storm, a fifteen-year old (!) who was a Force-sensitive Jedi-in-waiting with a taste for standing up to bullies – including the famous Boba Fett! Talk about wish fulfillment. On the planet Toprawa, Havet was hired to steal the Death Star’s superlaser plans from the Imperial Research Station while the Rebel Alliance captured and held the facility long enough for the station’s communications equipment to transmit the data to Princess Leia’s starship.

Jedi Dawn matched up perfectly with the events of the Star Wars radio drama, including reusing some dialogue during the transmission sequence. The character of Havet Storm was not referenced again until 2005’s The Dark Forces Saga, a series of roleplaying game articles published by Wizards of the Coast. It revealed that Havet had eventually become a Jedi in training under Luke Skywalker until he was killed by a fellow student named Desann who fell to the dark side.

In 1993’s Star Wars: X-Wing, you take on the role of Keyan Farlander, a farmboy turned Rebel starfighter pilot (original, huh?) battling the Galactic Empire prior to the Battle of Yavin. In one mission, Farlander is tasked with protecting the shuttle Maria as it transferred data on the Death Star plans to the corvette Tantive IV. The information on the plans had been intercepted by captured communications satellites deployed in the Cron Drift. The information was picked up by outpost AX-235 and couriered to the Mon Calamari Star Cruiser Independence by mustachioed Tatooinian hero Biggs Darklighter. The plans were subsequently ferried from the cruiser by the Maria to the Tantive IV. The Alliance deployed several decoy corvettes to disguise the transfer from the Star Destroyer Immortal before the corvette left for its fateful rendezvous on Tatooine.

Star Wars: Dark Forces, released in 1995, is the story of Star Wars’ answer to Chuck Norris – the mighty Kyle Katarn, bearded hero and master of the Bryar pistol. The first mission follows Katarn’s infiltration of an Imperial facility on the planet Danuta. Using nothing more that his trusty Bryar pistol and beardiness, Katarn stealthily infiltrated the facility then proceeded to blow the merry hell out of the personnel stationed there while trekking from one side of the facility to the other finding specially colored keys to access the plans because basic Imperial facility design is woefully inadequate and unnecessarily convoluted. The adventure was later explored in Dark Forces: Soldier for the Empire, the first graphic novella in a series of adaptations of the Dark Forces game series which was published in 1997.

1998 saw the release of Rebel Dawn, the third book in the Han Solo Trilogy by A. C. Crispin. Rebels on Toprawa, led by Bria Tharen and Red Hand Squadron, ambushed an Imperial convoy carrying the Death Star plans including information on potential weaknesses. The planet was blockaded by the Empire in retaliation, and the Rebels assaulted and captured a communications center to transmit the plans off-world to the Tantive IV. The mission succeeded but resulted in the deaths of the entire Rebel force as they held off the Imperial assault to the last man. The details of the Rebels’ battle with Imperial forces and the transmission of the Death Star plans to Princess Leia’s ship meshed nicely with previously established events already shown in the Star Wars radio drama and the Jedi Dawn book.

Battlefront II was released in 2005 and featured a mission where, playing as the 501st stormtrooper legion aboard the Death Star, you were tasked with quelling a major prison break of Alliance prisoners and Jedi who also managed to retain their clothing, weapons and equipment. Despite your systematical killing of a whole bunch of enemy combatants, several of them managed to escape with elements of the Death Star plans which were just laying around available for anyone to steal, taking them to an Alliance base on Polis Massa. The Empire attempted to take the plans back from the Rebels, but found they were not at the Polis Massa base. Information recovered from the facility did lead them to the Tantive IV, which was a stroke of luck.

Empire at War was a 2006 real time strategy game which put you in command of both the Rebel Alliance and Galactic Empire in a campaign for galactic supremacy. One mission in the Rebel campaign involved using Han Solo (apparently by forcing him to work for them after rescuing him from the Empire at some point in the campaign) to infiltrate the Imperial shipping facilities in the Vergesso Asteroid and plant an EMP in a cargo container. Said cargo container was taken to a space station orbiting Corulag. Using the EMP, the Rebels disabled the station’s defenses and acquired data confirming the existence of the Death Star but not the technical information. Also they found Admiral Ackbar. A later mission revealed that rogue Imperial Moff Kalast had acquired secret codes for the Death Star by employing the Bothan Spynet which he then sent to the Rebel Alliance.

In 2006, Lethal Alliance introduced us to the Twi’lek Rianna Saren, a former slave turned mercenary. During the course of the game, the player was incarcerated on the prison planet Despayre (go on, say it out loud), around which the Death Star was being constructed. Saren escaped Despayre before the planet was destroyed by the Death Star as a test of its firing capabilities. Communicating the existence of the station to the Rebels from the Death Star itself, Saren escaped the station and headed to Danuta to retrieve intelligence on the Death Star from her former slaver, Zarien Kheev, which was sent to the Alliance.

2008’s entry in the Star Wars Death Star saga was The Force Unleashed, where players took on the role of Galen Marek, Darth Vader’s secret apprentice as he first eliminated threats to Imperial rule then assisted in the creation of the Rebel Alliance because heaven forbid you play as a bad guy for the entire game. Towards the end of the game, four Rebel leaders – Bail Organa, Mon Mothma, Garm Bel Iblis, and Rahm Kota (who, like the now-similarly blind Jedi Kanan Jarrus, was inspired by the stories of the blind swordsman Zatoichi) – are captured by the Empire and taken aboard the under construction Death Star. Marek engineered their rescue but was killed in the attempt. All this led to the Alliance being formed with the full knowledge of the existence of the Death Star years before the start of the films.

Tying It All Together

With multiple conflicting sources, the question was asked – who authorized the construction of a battlestation with no safety railings? Also, who really stole the Death Star plans?

Various supplemental Legends books have attempted to reconcile all the differing accounts of the theft of the Death Star plans, such as The Essential Chronology‘s revelation that the Rebel Alliance set multiple operations to steal the plans into motion, not relying on a single mission in order to maximize their chances of success. The plans recovered by Kyle Katarn and Bria Tharen were only partial schematics that, when combined, created a more complete set of technical readouts. StarWars.com backed up this version of events, adding that information safeguarded by Keyan Farlander and other Rebel heroes was also added to the schematic mix. This combined technical schematic was taken by Princess Leia’s ship to Tatooine, where it was eventually entrusted to an astromech droid … and the rest is history.

While it is unlikely that Rogue One will directly adapt any of this material, the film does feature Felicity Jones in the lead role. Could her character and her rag-tag squad of Rebels have taken inspiration from Bria Tharen and her Red Hand Squadron?