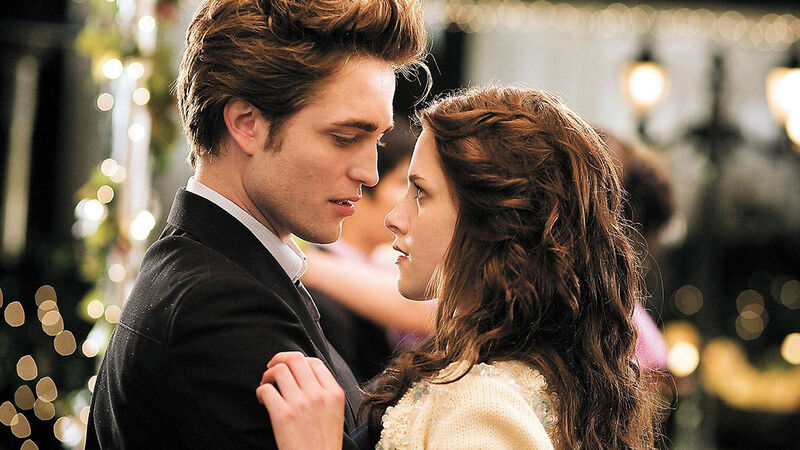 Over the weekend, about 500 Twilight fans gathered in Forks, Washington — the IRL setting of the Twilight Saga — to celebrate their fandom during the annual Forever Twilight in Forks Festival. There were a ton of fun activities: hiking at the La Push beaches, a cooking class where you could learn how to make Bella’s infamous cup of blood, a T-shirt quilting class, and even a full-scale wedding reception starring actors dressed exactly like Bella, Edward, and the rest of the Olympic Coven.

But the highlight of the weekend was undoubtedly Saturday’s Forever Twilight in Forks Festival Panel. The two-and-a-half hour panel featured a presentation from Twilight director Catherine Hardwicke as well as a paired interview with Nancy Kirkpatrick (President of Worldwide Marketing, Summit Entertainment) and Eric Kops (Director of Publicity at Summit Entertainment).

The trio shared a ton of never-before-seen photos from the cast’s auditions, candid behind-the-scenes glimpses, and off-screen stories from their years working on the global phenomenon. And, of course, they addressed all the drama that took place — including the romantic relationship between stars Robert Pattinson and Kristen Stewart. Here’s everything we learned.

1. Pattinson and Stewart Were Actually a Couple

“First of all, Rob and Kristen were in love,” Kirkpatrick confirmed. “They were a real couple, it wasn’t manufactured in Hollywood. I wish I was that good.”

2. In Fact, He Fell in Love With Her During Their First Audition

The two first met at Rob’s Twilight audition for Catherine Hardwicke — Kristen had already been cast in the role of Bella and was reading with potential Edward actors. Kirkpatrick said, “Rob and I were flying on a private plane — to a Walmart, of all places — and we’re chatting. He goes, ‘Oh, yeah. I was in love with Kristen from the very first time I saw her in the audition.’” Catherine Hardwicke shared photos of the two actors from that day — Stewart wore jeans and a gray sweatshirt, and Pattinson had black hair from a previous role and wore a red and blue plaid shirt.

3. But Hardwicke Told Pattinson to Back Off Since Stewart Was Only 17 at the Time

4. Their Relationship Was Both a Gift and a Curse to the Franchise

“It was a blessing and a curse in some ways, it made things really complicated,” Kops said. “You were worried about them as individuals. You knew that they were young stars and this was such a giant thing that exploded. We were very protective of them, always. [We] tried to let them have a personal life and be young people, and yet you knew it was a billion-dollar thing to our company. So it was a really delicate balance of trying to honor what they had as individuals and honor the franchise.”

5. The Publicity Team Got an Hour’s Notice Before the Infamous UsWeekly Story About Stewart and Rupert Sanders Broke in 2012

“[Rob and Kristen] were both heartbroken and devastated,” Kirkpatrick said. “It was hard. It was really, really hard.” And there was double the pressure on everyone since they were both an IRL and on-screen couple. Kops said, “At that point, we knew them as colleagues and as a couple, and so in addition to what it was going to mean for the movies, there are two people who have to live their personal lives and figure this out.”

6. Kirkpatrick and Kops Both Advised Stewart Not to Release Her Public Apology

“There were things we wish Kristen would have said, and there’s what Kristen needed to say for Kristen, and at some point, we were like, ‘OK,’” Kops recalled. “You have to do what you think you can live with. So she put out a statement that neither one of us probably would have done, but we both understood this was what she needed to do and so she did it.” In the statement, Stewart apologized to “the person I love and respect the most, Rob. I love him, I love him, I’m so sorry.” These days, Kirkpatrick thinks Stewart was right to release it. “She felt like she needed to do a very public apology to Rob for what had happened, and she did it. And she was right.”

7. Someone Stole a Computer With Nearly All of the Raw Footage From Both Breaking Dawn Movies on It

While filming in Louisiana, a member of the production team had all of the daily footage loaded onto a computer so he could work on editing it — about three-quarters of both movies in total. When the computer was stolen, Kirkpatrick flew to Louisiana and met with local police and the FBI. Luckily, the footage never leaked. “Whoever sold the computer had no idea what was on it,” Kirkpatrick said. “I think they wiped it and just started using it for Facebook.”

8. For About 45 minutes, Everyone Thought Pattinson Might Be Dead

Kops joined the Twilight team after the first movie had been released. On his first day in the office, around 9:45 a.m., his phone rang and a credible source gave him some terrifying news: “‘They’re saying Rob Pattinson’s dead.’” Kops, of course, flipped. “First day! I literally was like, ‘Am I being punked?!’” he laughed. Kirkpatrick called Pattinson’s security guard, who made sure he was, in fact, alive. “And it was fine,” Kops said. “Within 45 minutes the fire started and was put out.”

A cast member threw their script in a trash can during filming for New Moon, and someone picked it up and threatened to leak it. Kirkpatrick ended up approving a $10,000 release fee. “And we had to invite them to the premiere,” she groaned. “It was painful.”

The famous treetops sequence from the Twilight movie doesn’t appear in the book, but Hardwicke wanted to give the movie a cinematic feel and pull the audience into the action. The night before filming, she realized there was no dialogue throughout the whole sequence, so she wrote down nine possible lines of dialogue and let Pattinson pick which he liked best — and, of course, he picked “You better hold on tight, spider monkey.”

Twilight is being re-released on 4K Ultra HD Blu-Ray on October 23, and is returning to theaters for two days (October 21 and 23). Tickets are available at Fathom Events.