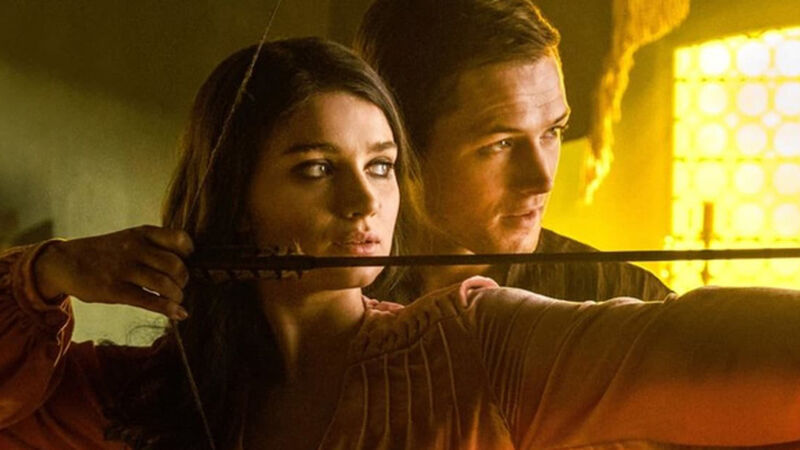 If there’s one thing the world doesn’t need, it’s another adaptation of the Robin Hood story. Well, that’s what we thought until we learned that director Otto Bathurst was taking a crack. He’s the dude who made the Black Mirror episode about the British Prime Minister having sex with a pig. Chances are that his Robin Hood won’t be too worried about canon.

Out this Friday, this new adaptation stars Taron Egerton from the Kingsman films as Robin, while Jamie Foxx (more fox fun to follow) is Little John. Yup, we’re sold. Last year Foxx described the movie as more akin to Zero Dark Thirty than any Robin Hood adaptation that had gone prior.

“We’re shooting with our bows,” he said, “but they computer-generated it so it’s rapid fire, almost like an AK…”

It’s a reminder that, when it comes to Robin Hood, there’s an awful lot of wiggle room for how the character is portrayed. Here are some handy tips for anyone attempting to bring Robin Hood to the screen. Again.

DO… BE A FORCE FOR GOOD

Befitting the mixture of fact and legend he has become, Robin Hood is a blank canvas for however you choose to portray him; as long as how you choose to portray him is good. A thoroughly decent fella, Robin robs from the rich to give to the poor. His intentions, Maid Marian aside, are pure. All of this forms the central tenet of Errol Flynn’s portrayal of the character in 1938’s technicolour masterpiece, The Adventures Of Robin Hood. Which is, in many ways, arguably the template for pretty much every depiction of Robin Hood.

Flynn’s performance is honourable in every way, which is ironic given the accusations of sexual impropriety and closet fascism (in 1980, the author Charles Higham alleged that Flynn spied for the Nazis during World War II) that dogged him in real life. Errol was believed to be big mates with Scientology founder L. Ron Hubbard too, and you know what they say about the company you keep…

Ridley Scott’s very gritty, very tedious 2011 adaptation saw the director reunite with Russell Crowe, with whom he won a clutch of Oscars in 2000 for swords-and-sandals epic Gladiator. That was a good film. This isn’t. In truth, it’s worth questioning why Scott even bothered. The film began life as a script about a love triangle involving a much less virtuous Robin, an easier-to-like Sherriff of Nottingham, and of course, Lady Marian. Which sounds like a fairly terrible idea. Until you learn that a rewrite of the script later depicted the sheriff as a “CSI-style forensics investigator” (those are the words of former Universal Chairman Marc Shmuger).

In the end, the script went through several more rewrites, production on the movie was delayed due to the Writers Guild Of America strike and seasonal concerns about whether the fauna on set would look suitably Sherwood Forest-like. When the movie finally arrived, it was too big on people saying boring things in castles. Too small on swashbuckling. And here’s the kicker. It seems like Scott didn’t even like Robin Hood.

“I’m trying to think of the last good one,” said the director, prior to starting the project. “Errol Flynn? A bit cheesy? A big cheese. God bless him. Kevin Costner? In the wig, you mean? The one I thought was the best, frankly, was Mel Brooks’s Men in Tights, because Cary Elwes (who played Robin) was quite a comic…”

DO… HAVE A BANGING THEME SONG

It’s pretty wild that the legend of Robin Hood will, in some way, now forever be associated with a husky-voiced Canadian singing a (unquestionably brilliant) power ballad to trees in a forest. Written to order by the late American film composer Michael Kamen for the 1991 Kevin Costner vehicle Robin Hood: Prince Of Thieves, the middle-eight, break and outro are additions by aforementioned soft rockin’ Canuck Bryan Adams and producer Mutt Lange.

Legend has it that the song was written within an hour. So, what have you done today? Number one in the UK for 16 weeks, which is still a UK charts record, the song was allegedly disliked by the film studio’s suits, on account of it not featuring any instruments of the era the movie was set in. It’s kinda cool imagining that guitar solo being played on a lute, huh? Kamen’s original intention was that the song would be sung by a woman, aping the idea of Maid Marian singing the song to Robin. Lisa Stansfield was approached. As was Kate Bush. And Annie Lennox. They all said “no, it’s crap” (we’re paraphrasing). Bryan Adam’s current wealth is estimated to be in the region of $65 million.

DON’T… BE AFRAID TO GET A BIT WEIRD

It’s impressive that just three series of British TV production Robin Of Sherwood, comprising twenty-six episodes, was enough to generate a devoted cult following that exists 32 years after the final episode aired. In fact, thanks to a successful Indiegogo campaign in 2015, £10,000 was raised to cover the production of a new audio play – Knights Of The Apocalypse — released the following year.

Why has the show’s appeal endured? Well, for one thing, it’s quite unlike any adaptation of the Robin Hood legend that preceded it, or that has followed. Sure, some of the innovations of the series have now become established in Robin Hood folklore; for the first time, the Merry Men had a Muslim accomplice, Saracen ex-assassin Nasir, played by Mark Ryan (he’s the voice of Bumblebee in the Transformers movies!), but even those that haven’t linger long in the memory. Robin of Sherwood, see, is for the largest part utterly bonkers. It’s got some wild Pagan mysticism going on; Robin is in fact, handed his destiny by one Herne the Hunter, an antlered forest god!

DO… REMEMBER ROBIN IS FOXY

The twenty-first animated movie in the Disney canon, this 1973 joint, reimagining Robin Hood’s adventures via a cast of anthropomorphic creatures (including both Robin and Maid Marian as foxes) was for many developing minds, a sort of… um… awakening. Yes, that’s a thing. Google it. Though this isn’t any kind of ‘Furry’ business. Chivalrous, committed to justice, not afraid of being goofy if it warms the heart of the girl; for many, Robin is simply a stone-cold fox. 2015 Buzzfeed even penned the seminal piece of journalism ’18 Times The Fox In Robin Hood Was Weirdly Hot’. We’re more of a Friar Tuck website, by the way. He’s a badger. What, you didn’t know websites can have those kinds of feelings? What do you think happens when you ‘refresh page’, huh?

Robin Hood hits screens in the UK and US on November 21.