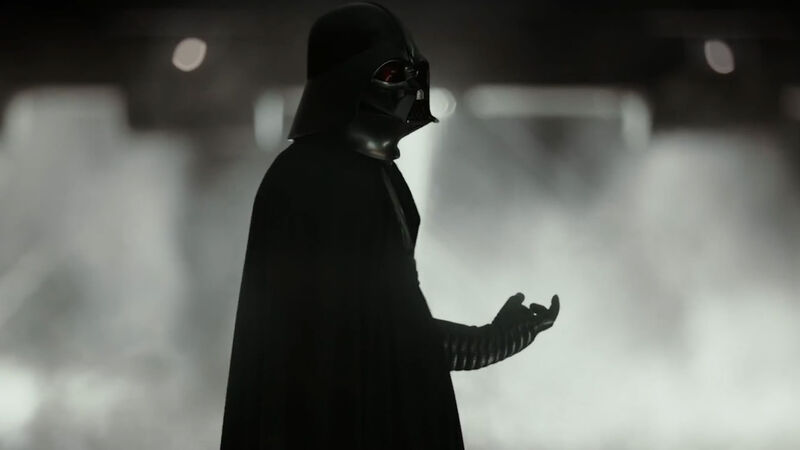 ‘Rogue One’ and Darth Vader’s Underrated Sense of Humor

When I saw Rogue One with a group of my Star Wars-loving friends, we left the theater with many thoughts. Mostly positive, some negative. One of the biggest complaints of all, one I’d see repeated online, was that Darth Vader told a corny joke in his first Rogue One scene. I was more shocked by my friends’ reactions. Didn’t they know Darth Vader is one of the funniest characters in Star Wars?

Rogue One spoilers follow: Darth Vader, once again voiced by James Earl Jones, has a dramatic back-and-forth with Ben Mendelsohn’s Krennic, and the former Anakin Skywalker closes the scene by Force choking the Imperial Director. Vader then says, sarcastically, “Be careful not to choke on your aspirations, Director.” That may be a silly turn of phrase, but it’s entirely faithful to Vader’s character. I once underestimated the power of Darth Vader’s sense of humor too. My perception recently shifted after 2015’s comic book adaptations made me see the Sith Lord in a new light.

Growing up and into adulthood, I must’ve watched the Original Trilogy dozens of times, on top of collecting Star Wars toys, video games, and books. In my mind, Darth Vader was the ultimate evildoer. A terrifying, unstoppable figure that could mow down dozens of Rebels without showing a single emotion on his ghastly mask. Darth Vader was someone to take seriously.

But in my memories, I glossed over all the character-building moments that revealed Vader’s sarcasm again and again. So many classic quotes show Vader’s dark sense of humor. Like, “We would be honored if you would join us.” Or, “The Emperor is not as forgiving as I am.” Or, “I find your lack of faith disturbing.”

Those scenes and more are all iconic moments that every Star Wars fan remembers, even if those same diehards wouldn’t immediately label Darth Vader as “funny.” Of course, it didn’t help that Vader’s sense of humor seemed completely lost when he was Anakin in the prequels. This interpretation was much more petulant than sarcastic. Like many others, I either recalled scary Vader or annoying Anakin. It wasn’t until I saw Darth Vader speak in word balloons that I realized how funny he could be.

Vader on the Comics Page

In January of 2015, Marvel Comics became the official home to Star Wars graphic novels. The first books take place in the three years between A New Hope and Empire Strikes Back. That meant that Darth Vader makes regular appearances. And when scripted by Jason Aaron and Kieron Gillen in Star Wars and Darth Vader (respectively), the Sith Lord was as funny as ever on the comic panel.

In Aaron’s Star Wars, Vader’s jokes and mockery of the Rebels shows how little he respects their efforts. As the only living Jedi (so he thinks) Vader outclasses everyone else on the battlefield. He’s quick to remind people of his skill with pointed barbs right before he decapitates them. Meanwhile, as the lead in Gillen’s Darth Vader, his dark wit is even sharper.

Gillen and artist Salvador Larocca make Vader the antihero of his book. He’s continually working to his own ends, often outwitting and outmaneuvering Imperial officers. It makes for intense stories where the only comic relief is Vader’s overt disdain for the Empire and even the Emperor himself. Despite all the deaths and atrocities Darth Vader commits in his comics, it’s lightened just enough by a brash sense of humor that comes out at the most exciting moments. It’s a sublime way of humanizing such an inhuman enemy.

So, don’t groan when you hear Darth Vader make a goofy pun in his next appearance either. Darth Vader is pop culture’s ultimate father, so of course, he has a deep commitment to dad jokes.